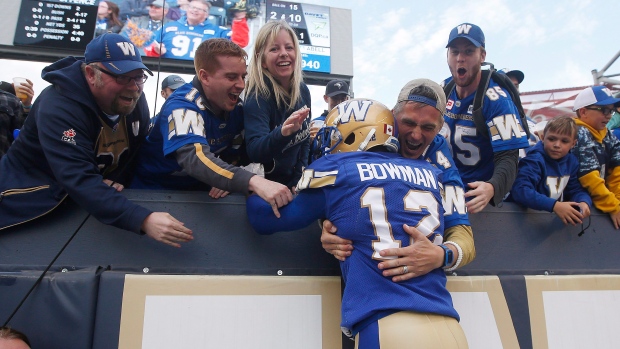 WINNIPEG — Chris Streveler wasn't thinking about how much his perfect passing game might propel him up the Blue Bombers' quarterback depth chart.

Fighting for a backup spot behind starter Matt Nichols, the rookie completed all 10 passes he attempted, including an 80-yard touchdown strike to receiver Myles White, as Winnipeg defeated the Edmonton Eskimos 33-13 on Friday in CFL exhibition action.

"I don't know," Streveler, 23, said when asked if his performance helped his cause. "I don't really think about that as much. It's a day-by-day process. This was just another small, little piece of everything that we've been doing.

"We've been practising for two weeks now, so to say that one game is going to make a tremendous leap for anybody, I don't know if that's the case. You just want to get better every single day and come and do your best and learn and compete."

Streveler, who set 20 program records at the University of South Dakota, passed for 140 yards, finishing with one TD, no interceptions and a fumble. He also rushed four times for 37 yards.

He's in a fight for the crucial backup spot behind Nichols, which suddenly became vacant when veteran quarterback Darian Durant retired in early May after signing with Winnipeg in the off-season.

Nichols was impressed with Streveler's composure. Backup contender Alex Ross was 1 for 8 for eight yards.

"I think that (Streveler) did a great job going in there and just kind of taking command, taking control and showing that he can for sure play in this league," Nichols said.

Bomber fans got a scare on the first play of the game, when Nichols was taken down hard on his first pass and appeared to be favouring an arm. He was briefly replaced by Ross.

"Just needed to get checked out real quick, make sure I was good to go," Nichols said. "Obviously, a pre-season game, too, just want to make sure that everything's working."

The series went two-and-out and turned worse when Eskimos running back Jordan Robinson took a Justin Medlock punt 98 yards for the TD at 1:48.

Veteran receiver Adarius Bowman hung on to a 15-yard TD pass in the end zone from Nichols in his second go-round with the team to tie it 7-7.

Bowman played his second and third years in the league (2009 and '10) with Winnipeg before moving to Edmonton. He returned to the Bombers as a free-agent signing this off-season.

Edmonton left the majority of its starters at home, including quarterback Mike Reilly and running back C.J. Gable. Zach Kline and Danny O'Brien both had turns throwing the ball.

"The result wasn't what you want in any game, but there were a lot of hard fought plays out there and once we watch the film we'll be better for it," Edmonton head coach Jason Maas said.

Winnipeg rookie running back Johnny Augustine ran 18 yards for another touchdown. White, who has a visor on his helmet that reflects blue under the lights, caught a long pass from Streveler and ran the rest of the way to give Winnipeg a 29-13 lead at 10:39 of the third quarter.

Edmonton kicker Sean Whyte made field goals from 46 and 51 yards, but went wide on a 37-yard attempt. He was good on one convert. The Eskimos also conceded a punt single.