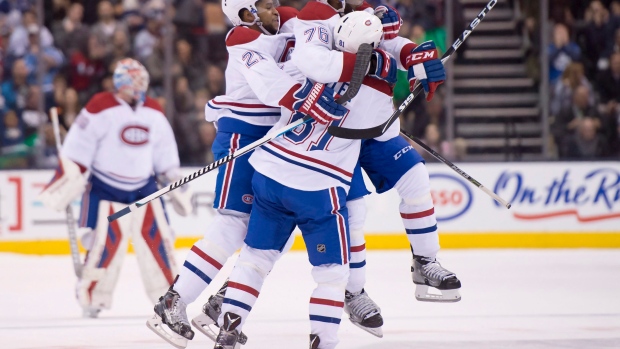 TORONTO - On a night where they celebrated a distinguished past, the Toronto Maple Leafs paid for a passage of modern-day mediocrity.

Down 2-0 to the Montreal Canadiens after a dire first period Saturday, Toronto pushed back in the second and tied it in the third. But despite the best efforts of goalie James Reimer, the Leafs could not complete the comeback and lost 3-2 via shootout.

"We weren't ready to go and didn't compete hard," said Leafs coach Mike Babcock, who rued giving his team a day off Friday.

It was a badly needed victory for the Canadiens, ending a five-game winless stretch.

"We're in a playoff race, those two points are crucial and we reacted the right way tonight," said Montreal coach Michel Therrien. "I liked the way we were engaged when we started the game and we were dictating the game. There's a lot of times when we got good starts, but finally (we) got rewarded."

Max Pacioretty and Lars Eller, with the coup de grace, scored for the Habs in the five-round shootout. Peter Holland had the lone Toronto success following an action-packed overtime.

The Original Six matchup was enhanced by a pre-game ceremony honouring Dave Keon and the late Turk Broda and Tim Horton for their induction into the Leafs' Legends Row.

But it took the Habs just 1:41 to end the festivities with Desharnais beating Reimer on the Habs' first shot after the Leafs failed to clear their zone and Dale Weise, attracting three Toronto players in the slot, found Desharnais alone in the face-off circle to the right of Reimer.

The Canadiens had 12 shots on Reimer before Mike Condon faced a shot at the other end, a dribbler with 8:30 left in the first period. Fleischmann scored with shot No 14 late in the period, beating Reimer with a shot from the slot after a nifty drop pass by Eller.

"They played like a desperate team right at the start," said Lupul. "They came out and were putting a ton of pressure on us in our own end."

Montreal outshot Toronto 14-3 in the period.

"You get embarrassed when you're getting outworked that bad and you're not competing hard," said Babcock.

The Toronto coach lamented that his fourth line of Rich Clune, Byron Froese and Daniel Winnik was his best unit "by a mile" in the opening period.

The Leafs rallied to start the second and got some reward midway through the period when Rielly, flying down the flank, found Kadri charging to the front of goal. The Leafs centre redirected the puck past Condon.

The Leafs tied it up early in the third when Lupul put away a rebound off a Holland shot that Condon could not hang onto.

Reimer made a big stop on Brendan Gallagher midway through the third to preserve the tie. And he got some help when a Canadiens shot hit one post, trickled along the goalline, hitting the other post but staying out.

"They came out in the second and kind of took it to us and they started chipping away at our lead, but we stuck with it and very happy with the outcome," said Condon.

Montreal arrived just eight points ahead of Toronto, which has two games in hand. The Canadiens were winless in five (0-4-1) and had won just two of their previous nine (2-6-1).

The Leafs weren't much better with a 1-5-1 run coming into the game.

The Canadiens won their first nine games of the season and had a 19-4-3 record on Dec. 1. But coming into Saturday's game, they had gone 4-16-1 since and dropped out of a post-season position.

Star goalie Carey Price has been out since suffering a lower-body injury Oct. 29. The Habs were 9-2-0 at the time.

Thawing out the previously icy relationship between Keon and the Leafs marks another step in the franchise's ongoing bid to rectify past mistakes.

The compact centre who wore No. 14 remains a Leaf icon, albeit for those with likely more than a touch of grey in their hair. Keon, who could score goals and stop them, won four Cups with the Leafs and left the team in 1975 as its all-time leading scorer with 365 goals. He still stands third in team goal-scoring behind Mats Sundin (420) and Darryl Sittler (389).

Lupul, for one, enjoyed both the festivities and having Keon visit the dressing room.

"I'm a hockey fan too .... It's pretty cool to have Dave Keon in here and to watch stuff about Turk Broda and Tim Horton. It's cool."