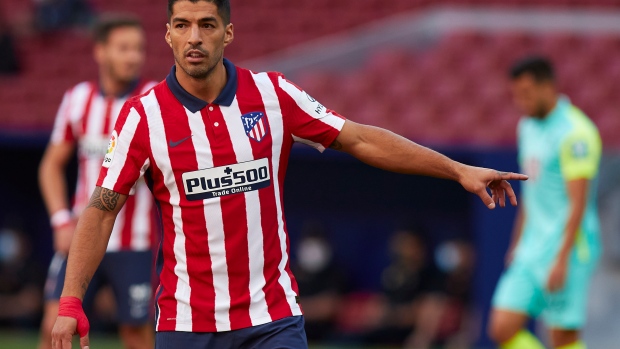 Suárez had debuted for Diego Simeone’s team by netting twice in a 6-1 rout of Granada after joining Atlético from Barcelona. But since then the Uruguay striker and his teammates had been restrained in 0-0 stalemates against Huesca and Villarreal.

Suárez got back on the board when he scored from a pass by Manuel Sánchez in the sixth minute at Celta's Balaídos Stadium, which was empty of fans like all top-flight matches in Spain due to the pandemic.

Yannick Carrasco added a second goal in stoppage time when he headed in a rebound after fellow substitute João Félix hit the crossbar with a curling strike.

Simeone may be without Diego Costa for Atlético’s Champions League opener at Bayern Munich on Wednesday. Costa asked to be substituted for what seemed to be a left thigh injury early in the second half.

Lucas Torreira made his debut for Atlético in midfield after arriving on loan from Arsenal. He played well, but also appeared to end the match with physical problems.

Celta had its chances to equalize in the first half, only to be stopped by the woodwork and goalkeeper Jan Oblak.

Sevilla will visit Chelsea in the Champions League on Tuesday after seeing its unbeaten streak in the league ended by Granada.

Granada beat 10-man Sevilla 1-0 after Yangel Herrera broke the deadlock with a header with eight minutes to go.

It was Sevilla’s first loss in the league since February. Julen Lopetegui's side had started this season with two wins and a draw in the last round at Barcelona.

Herrera has scored five goals in seven matches in all competitions for Granada.