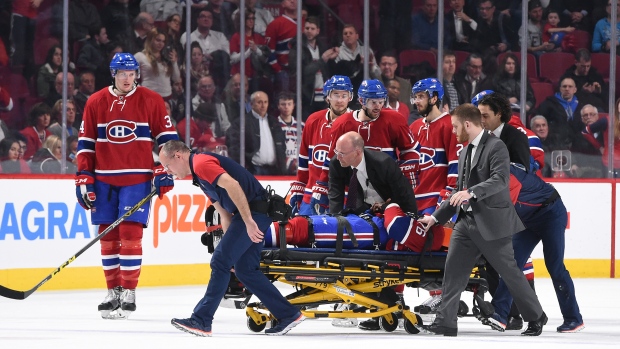 P.K. Subban is stretchered off the ice at the Bell Centre , Francois Lacasse/National Hockey League/Getty Images

MONTREAL - The sight of P.K. Subban lying motionless on the ice for several minutes cast a shadow on the Canadiens' victory.

Montreal's 3-2 win against the Buffalo Sabres on Thursday night was delayed late in the third period as Subban had to be taken off the ice on a stretcher.

Subban suffered a neck injury when teammate Alexei Emelin accidentally ran into him, knocking him on the side of the head with his back side while retrieving the puck in Montreal's corner.

The Canadiens' star defenceman spent eight minutes on the ice as the team's trainers and doctors tended to him. He was taken to the hospital for further testing and the team said he had normal movement in his extremities.

"It's scary to see that many trainers and doctors on the ice," said captain Max Pacioretty, who added Subban was communicating with him shortly after the incident. "Nobody knew exactly what happened. That was the scariest part for me. It looked like a nothing play.

"It was impossible to concentrate after that."

After the lengthy delay, Montreal (32-30-6) held on to the one-goal lead for its second consecutive victory.

Both teams, however, agreed the game became a side note after Subban's injury.

"It sucked the wind out of both teams," said Montreal's Torrey Mitchell, who scored the game winner in the third period. "When you see a guy go down like that, and the stretcher comes out, it takes the life out of you. We're just praying that Subby is okay right now."

Added Sabres coach Dan Bylsma: "You're trying to win a hockey game but you almost felt like you don't want to keep playing at that point and time. The game's an after-thought."

Subban has played 273 consecutive regular-season games for the Canadiens — the team's longest active streak. He last missed a game on Jan. 30, 2013. That streak will likely be broken on Saturday when Montreal plays Minnesota.

Everything was looking good for Montreal before Subban's injury.

The red-hot Alex Galchenyuk scored twice and now leads the Canadiens with 25 goals this season.

Playing in his third consecutive game as Montreal's first-line centre, Galchenyuk beat Robin Lehner from point-blank range after a nifty pass from Pacioretty behind the net at 9:09 of the second period.

The 22-year-old added his second of the game at 19:16 of the second. With Montreal on the power play, Galchenyuk was left all alone in front of goal for the easy one-timer to put Montreal up 2-1.

"We knew he was on fire and unfortunately we were unable to stop him," said Bylsma. "It was a quick out to the front of the net and Alex is all alone, all by himself, standing in front of our goalie. For a guy that's that hot…"

Galchenyuk, who recorded his third consecutive two-goal game and team-leading seventh of the season, has 11 goals in his last eight games. According to Elias Sports, Galchenyuk is the first Habs player with 5 multi-goal efforts in an eight-game span since Jean Beliveau in 1959.

After former Canadiens captain Brian Gionta tied things up at 2-2 at 5:10 of the third period, Mitchell scored the winner for Montreal at 13:21.

The winger managed to control a bouncing puck to beat Lehner, who stopped 31-of-34 shots, through traffic.

The loss was Buffalo's (27-33-9) first against an Atlantic-Division opponent since Oct. 17.

The Canadiens jumped into 11th in the Eastern Conference with the win. They are 7-0-1 in their last eight home games.

Mike Condon made 36 saves for his 17th win of the season, best among rookie goaltenders.

Notes: Nicolas Deslauriers also scored for the Sabres. … Montreal got its first power-play goal in seven games. … The Canadiens play the Sabres again next Wednesday in Buffalo. … Prior to puck drop, Montreal presented the Jean Beliveau trophy to Subban for his community involvement.