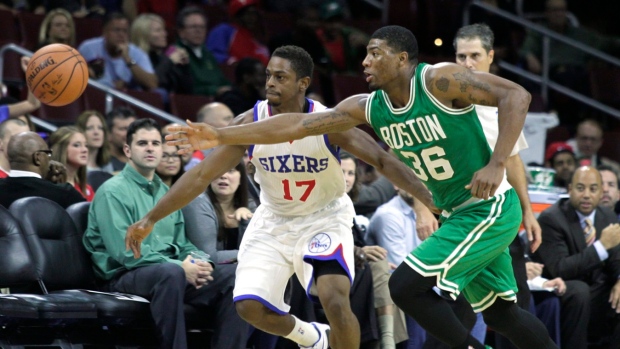 PHILADELPHIA - Jared Sullinger scored 21 points and Avery Bradley added 20 — all in the first half — to help the Boston Celtics beat the Philadelphia 76ers 111-91 in an exhibition game Thursday night.

Jeff Green, playing in his second preseason game after missing the first four because of a calf strain, had 18 points. The Celtics (3-3) shot 47.2 per cent from the floor and made 15 of 37 3-point attempts.

Tony Wroten and Elliot Williams each had 17 points for Philadelphia (1-4).

Philadelphia coach Brett Brown missed the game to be with Joel Embiid after the rookie centre's younger brother, Arthur, died in Africa earlier in the day. General manager Sam Hinkie and forward Luc Mbah a Moute, like Embiid a native of Cameroon, joined Brown at Embiid's home in Philadelphia.

Philadelphia centre Nerlens Noel also missed the game with an upper respiratory infection. Michael Carter-Williams, the rookie of the year last season, has yet to play after undergoing off-season shoulder surgery.

Boston's Rajon Rondo is sidelined by a broken finger.