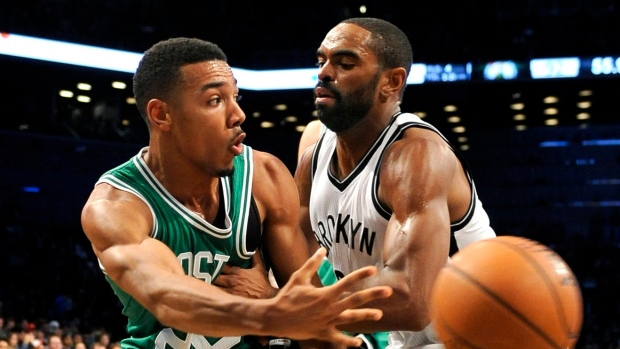 NEW YORK, N.Y. - Jared Sullinger took a glance at the game clock and thought something must be wrong. With fewer than six minutes left in the first quarter, he was still in the game.

There was a good reason he hadn't been subbed out yet, though.

In an experimental 44-minute preseason game, Sullinger had 21 points and 19 rebounds to help the Boston Celtics beat the Brooklyn Nets 95-90 on Sunday.

Backup point guard Jarrett Jack and reserve centre Jerome Jordan each had 17 points for the Nets (2-1).

The idea of a shortened game arose during the NBA coaches' off-season meeting as a way to analyze and compare the flow of the game with that of the league-standard 48 minutes.

"You noticed it a little bit when you're subbing at the start of quarters, but I thought the flow with the one less timeout was actually a little bit better in the second and fourth," Celtics coach Brad Stevens said. "I didn't notice it other than that."

While an average game takes 2 hours, 15 minutes, the game Saturday took 1 hour, 58 minutes. Instead of the customary 12-minute quarters, Sunday's game featured four 11-minute periods along with a reduction of mandatory timeouts from three to two during the second and fourth quarters.

The opening quarter was played in 19 minutes, the second in 29 minutes, and the third and fourth in 25 minutes each.

"I'm looking at the clock and it's 7 or 6 (minutes remaining) on the clock and I have to get myself back because only 5 minutes have gone off if it says 6 on the clock," Stevens said. "That's a little bit different, but I had it mapped out so I kind of knew what I was going to do."

Brooklyn power forward Kevin Garnett sat out against his former team because of a stomach virus.

Playing their first game since returning from a trip to China, the Nets shot 5 of 19 from the floor in the third period.

"The third quarter seemed like we ran out of gas and the China trip really caught up with us," coach Lionel Hollins said. "The energy started dropping. We started taking bad shots and turning the ball over."

Brooklyn point guard Deron Williams, who played 25 minutes but was rested for the entire fourth quarter, couldn't really pinpoint the effect the shortened game had after it was completed in under 2 hours.

"It's really hard to tell a minute a quarter (and) 4 minutes a game. When you're out there in real time, you're not really thinking about it," said Williams, who played just more than nine minutes in the second quarter and a little less than nine in the third.

Nets: Brooklyn centre Brook Lopez missed his first game after the team announced Thursday he would be sidelined 10-14 days due to a right mid-foot sprain he sustained last Wednesday. All-Star forward Joe Johnson noticed Lopez's absence on the court. "He draws so much attention. Other guys have to step out," Johnson said. ... Mason Plumlee started at centre for Lopez, unsure if he will play when the Nets open the season Oct. 29 in Boston. Jordan's contribution off the bench was a bright spot, including 13 points in the fourth quarter. "I've had him before and I'm pulling for him, but he's got to earn it," Hollins said. "He made a step in the right direction tonight. He did what we asked."

Celtics: Just like many of the players on both teams, Green didn't notice much difference with the 11-minute quarters. "When you are playing you don't really think about it too much," he said.

Nets: Maybe the 44-minute game will help the Nets on the second of a back-to-back. Brooklyn hosts the Philadelphia 76ers at Barclays Center on Monday night.

Celtics: Boston is back in action at home Wednesday, closing out its preseason schedule against the Nets.