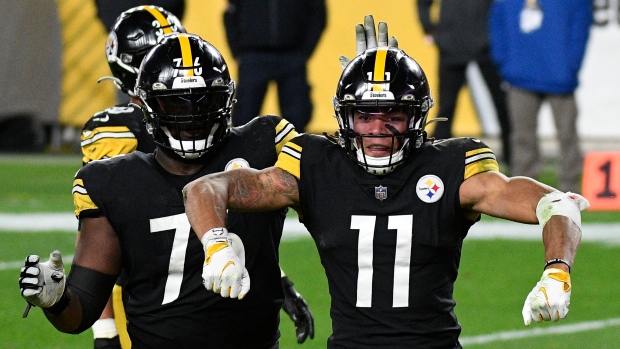 An AFC heavyweight tilt caps off the NFL Sunday Week 14 slate, as the Pittsburgh Steelers face the Buffalo Bills on TSN.

The 11-1 Steelers are fresh off their first defeat of the season at the hands of the Washington Football Team, while the 9-3 Bills beat up the San Francisco 49ers in prime time last week.

#Bills v #Steelers will match teams with a total record of 20-4.

The .833 combined winning percentage is the highest for a December/January regular season game in the history of @SNFonNBC#Billsmafia pic.twitter.com/4GksOdoofz

This game actually opened up Pittsburgh -1, but moved all the way to Buffalo -2.5 in less than 24 hours.

The exact opposite situation happened to Buffalo last week leading up to their tilt with the Niners, when they opened as a short favourite before closing as a 2.5-point underdog.

The line movement prior to this contest is predicated almost entirely on recency bias in my opinion.

The Bills looked like world beaters on Monday night in Week 13.

Meanwhile, the Steelers appeared sluggish and committed way too many unforced errors. Josh Allen was unstoppable versus San Francisco, throwing for 375 yards and four touchdowns, finishing with a 139.1 passer rating.

A big reason for his outstanding performance was the fact that he was kept clean almost the entire game.

He was pressured on just four of 40 drop backs, which gave him time to completely shred the Niners' secondary.

You know who won’t let him sit back and pick them apart?

They have Pro Football Focus’ number one coverage grade, and only the Los Angeles Rams allow fewer passing yards per game.

🚨🚨 Just a reminder that the highest graded defense is still the Pittsburgh Steelers #HereWeGo pic.twitter.com/tzX9lhivkO

While it’s true the Steelers haven’t faced a ton of elite quarterback competition, it should be noted that Allen’s completion percentage drops from 78.5 per cent when kept clean to 51.8 per cent under pressure.

Allen’s average yards per attempt dips from 8.5 when clean to 6.8 when under pressure.

Thriving as an Underdog

Let’s not forget that Pittsburgh is 11-1 and currently owns the AFC’s top seed. If not for seven drops, most of which happened in key situations, and a questionable 4th down play call in the final few minutes against Washington, the Steelers could easily be 12-0.

Now they’re getting points? Almost seems too good to be true. Yes, they’re down a couple key starters on defence, most notably Bud Dupree, but James Conner is expected to return, which will dramatically improve their run game.

The #Steelers have activated RB James Conner from the COVID list

Conner has missed the past two games due to COVID, and in his absence Pittsburgh averaged just 2.6 yards per carry. The Bills' biggest weakness on defence is against the run, and the Steelers would be wise to try and exploit that.

Also working in Pittsburgh’s favour is Mike Tomlin’s incredible record against the spread as an underdog.

Under Tomlin’s watch, the Steelers are 17-5 ATS as a road underdog versus winning teams during his tenure, including a 2-0 mark this season.

Pittsburgh is 8-4 ATS this season, and has allowed just one team to exceed 24 points against them.

Buffalo is the flavour of the month and while everyone else is jumping on the bandwagon, now is the perfect time to jump off.

Give me the Steelers plus the points, with a lean towards the under as well.

Just four Pittsburgh games have exceeded 48 total points in 2020 and none since Week 8.