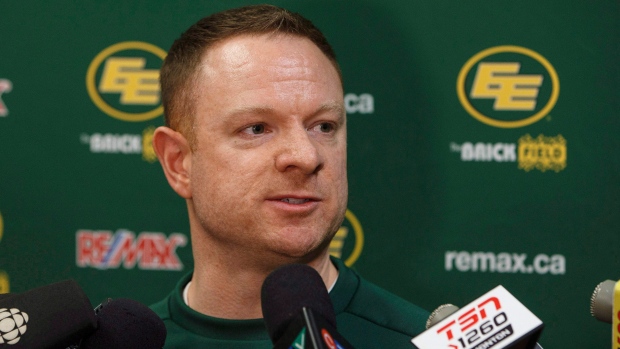 Early last winter, Edmonton Eskimos general manager Brock Sunderland was racking up the frequent flyer miles between Edmonton and Seattle, pulling out all the stops to try to keep his franchise quarterback in the fold.

Much of the CFL world had already concluded that Mike Reilly was bound for B.C. via free agency because he wanted to play close to his Seattle home, but Sunderland hadn’t given up.

Sunderland had wanted to extend Reilly’s contract since the previous off-season, but the quarterback resisted, often citing uncertainty around the expiring collective agreement.

But by February it was clear Reilly was going to make a decision once the free agent market opened, allowing him to weigh offers from other teams against staying in Edmonton.

“I had to plan for four different scenarios because I had no clue what the quarterback scenario was going to be and that’s how you build your franchise,” Sunderland said. “That was unique … it was challenging to say the least.”

The youngest general manager in pro football was already under the gun after his team missed the playoffs last season despite Reilly remaining healthy for the entire year.

Sunderland had said publicly the Eskimos were willing to match any offer for Reilly, so it was hard to argue he hadn’t done all he could to keep the quarterback. But there was no doubt about the pressure he was under to deliver Reilly’s replacement if he walked out the door.

And there were about to be a lot of moving parts on the quarterback market.

“The pending free agents out there – Trevor Harris, Jonathan Jennings, Bo Levi Mitchell – we had to account for all of them and say, ‘This may happen,’ Sunderland said. “Going into it, business is business and [Reilly] had an opportunity to make a choice. That’s why we had all the scenarios ready to go and were very organized and detailed in our part.”

Being under the gun in a football front office is exactly what Sunderland was seeking when he did a 180-degree turn on his professional career back in 2004 at age 24, quitting a sales job with Johnson & Johnson to start pitching himself to CFL teams as a scout willing to work for a few hundred dollars a month.

He’d grown up in Montana, the son of former NFL scout Marv Sunderland, who had a 40-year career working for the Patriots, Jets, Giants and Titans. Sunderland had a natural love for the game and was provided opportunities to scout alongside his father and visit NFL training camps.

It taught him not only a lot about what goes on behind the scenes in professional football, but also the realities that come with the job.

“When you grow up and your home and all the clothes on your back depend on wins and losses on Sundays, it’s a different view. It’s not a hobby to take us away from the real world,” he said. “For me, it was always wins and losses meant whether your mortgage was paid and whether there was food on the table. When there was down seasons with the Jets, those conversations were had.

“Growing up I lived through a few general manager changes with the New York Jets, so I was always very aware of the business side of it. But more than that, I just love the game.”

That love, however, waned during an injury-plagued college football career at the University of Montana, which sent him in another direction.

“I had six knee surgeries in college and was really, really bitter at football,” Sunderland said. “I didn’t watch it for a year – didn’t want to be around it, couldn’t watch it. It was just too painful.”

His first job after graduating was as a mortgage broker in Kentucky, before moving to a sales position with Johnson & Johnson back in Montana a year later.

It was then that he had one of those lightning-bolt moments, where he was suddenly struck with clarity about what he wanted to do with his life. And it wasn’t too late to try and catch it.

“I remember it very vividly. I was in Riverton, N.J., for a big training seminar with Johnson & Johnson,” Sunderland said. “It brought back a lot of memories being in the Northeast and they were taking everyone into New York City for a big night out, a big dinner and a Broadway show. There was football on the TV and I was like, ‘I’d rather watch football.’ The love came back, not gradually but instantly. From that moment I was kind of thinking, ‘What am I doing?’ I have a great job, with a great company and the money is good and everything, but this is not my passion. It was pretty instantaneous.”

Sunderland quit his job and starting calling CFL teams. Montreal hired him at a salary of $400 per month to scout pro and college players in the U.S. So Sunderland moved in with his college roommate in Montana and started getting to work.

Even back then, he knew his ambitions lay beyond scouting, to eventually become a decision maker, the guy who sits on the hot seat.

“It probably comes across crazy but one of the first games I scouted for Montreal was at the University of Montana and I was talking with a scout who was with the Bills at the time, just talking about career ambitions and everything,” Sunderland said. “He was saying, ‘I like what I’m doing in this role. I don’t ever want to be a decision maker,’ and immediately I said, ‘I do. I absolutely want to be a general manager.’ That was always the long-term goal.”

From Montreal, he was hired as a scout by the New York Jets, where he spent the Eric Mangini and Rex Ryan years. He returned to the CFL as assistant GM when Ottawa returned to the league as an expansion franchise in 2014, before he landed the Edmonton job in the late off-season of 2017.

​Sunderland says he understood where the Eskimos stood on the league’s historic pecking order long before he ever got to the CFL.

“I grew up in Montana, not far from here, and got Eskimo games on TV,” he said. “Some of my earliest football memories are watching Gizmo Williams do backflips. When I had the opportunity to interview here it gave me shivers because I understood the magnitude of what this team is, what it stands for and the history. I tell our organization and players this all the time.”

So much of that Eskimo legacy has been built on the shoulders of some of the league’s all-time great quarterbacks, like Tom Wilkinson, Warren Moon, Ricky Ray and, most recently, Reilly.

The franchise’s history wasn’t lost on Sunderland in early February when it looked like Reilly might be about to walk out the door.

Sunderland knew that the sooner he learned about Reilly’s decision, the better off the organization would be. So he moved up the timetable, taking the unusual step of allowing Reilly to test the open market two weeks early, hoping that he would inform the Eskimos of his decision before the start of free agency.

“He basically told us, ‘I’m not going to make a decision until I know what all the options are.’” Sunderland said. “I think it was a much better scenario for us to know than to be sitting there at noon on Feb. 12 saying, ‘What are we doing?’ Look at all the guys we would have missed on.”

By the night before the opening of free agency, Reilly had agreed to a four-year deal with B.C. worth almost $3 million, making him the league’s highest-paid player.

Sunderland immediately turned his attention to Harris, who he knew from his days as the assistant GM of the Redblacks, believing his relationship with the quarterback gave him an advantage over other possible suitors.

“I think it was huge,” Sunderland said. “Everything in life is a people business, so when the moment hit and Trevor was out there and I called him, it was as if we hadn’t missed a beat. …Really, once I spoke with Trevor, he kind of put his LeBron James hat on and did a lot of recruiting for us.”

That included helping Edmonton land Greg Ellingson, one of Harris’ top targets in Ottawa, and his left tackle, Sir Vincent Rogers. Those three players were key pieces of one of the CFL’s biggest free-agent hauls in years.

Sunderland had weathered the storm, so much so that the disappointment of Reilly’s departure was at least partially mitigated by excitement over the new additions. His moves will ultimately be judged by the Eskimos’ results but, at least for now, he had passed the test of managing one of the most difficult challenges in sports.