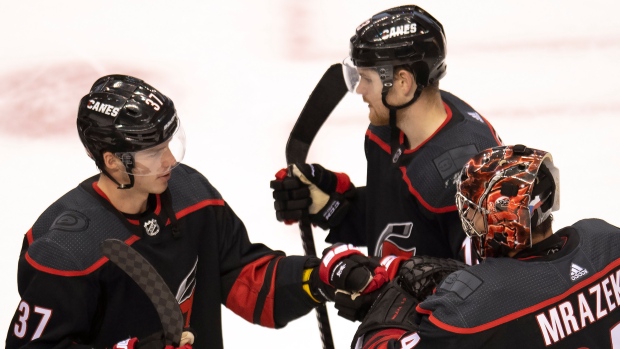 TORONTO — Andrei Svechnikov kept on the attack, both in skating with a physical edge and continuing to fire pucks at the net.

Now he has a franchise first and the Carolina Hurricanes are a win away from a sweep.

The 20-year-old scored three times for the first post-season hat trick in franchise history and the Hurricanes beat the New York Rangers 4-1 on Monday, securing a 2-0 lead in the Stanley Cup qualifier series.

Svechnikov beat Henrik Lundqvist for the game's first goal less than 5 minutes into the game. He followed with a power-play one-timer early in the second off a feed from Sami Vatanen, then buried a third at 14:02 of the third off a feed from Sebastian Aho — who assisted all three Svechnikov goals.

“I think he’ll get a few more (hat tricks) before his time’s over in his career,” Carolina coach Rod Brind’Amour said. “He’s a gamer, too. This guy is one of those players in this break that worked on this game, he wanted to get better. I think you’re seeing that.”

The 6-foot-2 Svechnikov, the No. 2 pick in the 2018 draft, had an assist in Saturday’s Game 1 victory then followed by delivering a game-high six hits in this one.

Svechnikov's first career hat trick is the first in the franchise's 144-game post-season history, including the Hartford Whalers. He became only the eighth player in NHL history age 20 or younger to tally a post-season hat trick, the last being Nashville's Filip Forsberg in April 2015.

With no fans to throw hats onto the ice in Toronto for Svechnikov's hat trick, the Hurricanes tweeted a photo that they had put several in his locker at PNC Arena back in Raleigh, North Carolina.

“He’s the whole package,” Rangers coach David Quinn said. “You’re talking about a lot of skill, physical, quick. There’s really not a lot he can’t do, and that’s why he was the second pick overall.”

Petr Mrazek added 23 saves for the Hurricanes, including big glove stops on Brett Howden and Mika Zibanejad in the first period. The one on Zibanejad, a 41-goal scorer in the regular season, came with the Rangers chasing a 2-1 lead late in the period.

The Rangers had swept the regular-season series, and the Hurricanes rarely led in any of those four meetings. But the Hurricanes have yet to trail in two games in Toronto and now have a chance to sweep the best-of-5 series.

“We’ve got to reset our minds and get focused on winning one hockey game,” Rangers defenceman Marc Staal said. “That’s all you can do at this point.”

Artemi Panarin scored for the Rangers, beating Mrazek in the closing seconds of a 5-on-3 power play in the first. Lundqvist had 30 saves, but lost for the second time in the post-season after going 3-0 against Carolina in the regular season.

NOTES: The Rangers had five power-play goals in the regular-season games, but have gone 1 for 11 with the man advantage in the post-season meetings. ... New York played without winger Jesper Fast. He left early Saturday after a hard hit from Carolina’s Brady Skjei — traded from the Rangers in February — and Quinn ruled him out Sunday. ... Rookie goaltender Igor Shesterkin (10-2) didn't play for the Rangers. Quinn had been uncertain Sunday on Shesterkin's status after he was unavailable for Game 1. Quinn said the Rangers are undecided on their goaltender plans for Game 3. ... Carolina defenceman Dougie Hamilton didn't play Monday after missing Game 1 and multiple recent practices.

Game 3 is Tuesday night in Toronto.