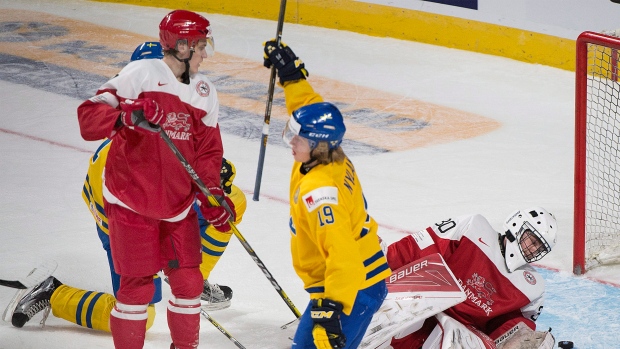 The 16-year-old had a goal and an assist in limited ice time as Sweden routed Denmark 6-1 in the tournament opener before an announced crowd of 4,518 at the Bell Centre on Monday afternoon.

"I just did my best and I had luck," said Dahlin, the Trollhatten, Sweden native who is seen as a potential first overall pick in the 2018 NHL draft. "Of course I'm nervous, but I need to play my game so I just go out and have fun."

Alexander Nylander scored twice while Carl Grundstrom, Joel Eriksson Ek and Jonathan Dahlen also scored for Sweden, one of the tournament favourites who are seeking a first world under-20 gold since 2012 in Calgary and Edmonton.

Dahlin, a defenceman in Sweden's top league, has been compared by some to Ottawa Senators star Erik Karlsson. He was used sparingly by coach Tomas Monten until getting regular ice time in the third period, but managed to make an impression against last year's quarter-finalists.

When he played, it was mainly with one of the top two lines so he could use is attacking skills.

"I hope he can grow, as the other players, but this is his first game and playing in the world juniors as a 16-year-old is a pretty big thing, so we wanted to give him an easy start," said Monten. "He showed he can play.

"We know he can be an asset for us in the offensive part of the game for sure. He's best on the offensive blue line and we wanted to start him off with some offensive zone faceoffs. Then he scored off one. That helped his game. He showed that maybe we should play him more next time."

Nikolaj Krag scored with 2:07 remaining for Denmark on a screened shot from the left circle to spoil Felix Sandstrom's shutout bid.

"We've got a really good team this year but I can't promise anything," Denmark's Christian Mieritz said of his team's chances in the tournament. "We have to give everything, every single shift, to get into the quarter-finals."

The Danes led 7-2 in shots through nine minutes but Sweden's attempts came on breakaways by Grundstrom and Tim Soderlund, both stopped by Lasse Petersen.

Nylander, drafted eighth overall by Buffalo in June, showed his class as he picked up a puck from Filip Ahl, made a move in the slot and slid it past Petersen at 10:11.

Monten put Dahlin on with the first line near the end and it produced his first point of the tournament. Ahl and Eriksson Ek won a puck battle and got it to Calgary Flames prospect Olivier Kylington, who slipped it across to Dalhlin on the right point for a wrist shot. The rebound went to Eriksson Ek to shoot into an open side at 18:24.

"It's the first time I've played with him, but he's a really good player," said Kylington, who was a hot prospect at 16 himself before going 60th overall in 2015 to the Flames. "I see some similarities to me in him when I was his age.

"He has a lot of confidence and that's good. He makes good decisions on the ice for someone that young. I'm impressed. But you need to take it day by day because it's a long tournament."

Toronto Maple Leafs prospect Grundstrom cruised into the Danish zone, cut across the slot and fed Dahlin at the side of the net 4:30 into the second frame. Grandstrom stole the puck from Oliver Larsen during a Denmark power play and went in alone to score shorthanded at 6:26.

Dahlin took a pass from Gabriel Carlsson, avoided a check and threaded a high wrist shot through traffic and under the crossbar at 13:12.

Nylander redirected a David Bernhardt shot out of the air at 18:22.

Monten was glad to get the points but wants his team quicker and sharper next time out.

"We had a rough start,"he said. "Denmark was a lot better than us in the first period.

"But we have a good group. We can make a run for it. I don't think we're there yet. We have to adapt and get a bit more speed into our game."