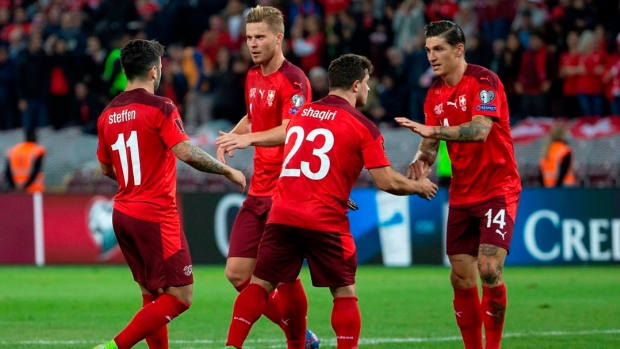 Goals from Steven Zuber and substitute Christian Fassnacht arrived in stoppage time at the end of each half, and both came after the Irish were reduced to 10 men.

Both goals came on fast breaks through an overrun Irish defense, yet were poor reward for Switzerland’s 25 attempts, seven on target, in a Europe Group C where Italy’s superior goal difference could yet be decisive.

Northern Ireland was undermanned from the 37th minute when defender Jamal Lewis was shown a second yellow card for taking too long to deliver a throw-in.

The win lifted the Swiss six points clear of the Irish in second place with three rounds of games left.

Switzerland is three points behind Italy and can draw level on Tuesday by winning at last-placed Lithuania, which got its first points by beating Bulgaria 3-1 on Saturday.

Italy is hosting the Nations League Finals — playing Belgium in a third-place game on Sunday — and returns to World Cup action against the Swiss next month.

Group C should be shaped by that Nov. 12 game in Rome. Italy has a goal difference six better than Switzerland and victory in their clash could all but seal the European champion’s place at the World Cup in Qatar.

Only group winners advance direct to Qatar, and runners-up enter a 12-team playoffs in March where three places at the finals tournament are on offer.

If goal difference does become key, the Swiss could reflect on so many missed chances on Saturday and an earlier 1-0 home win against Lithuania. Italy won 5-0 when it hosted Lithuania.

Switzerland and Northern Ireland drew 0-0 last month in Belfast and their four meetings in World Cup qualification games in the past four years have produced just three goals, all for the Swiss.

Switzerland thought it led in the fourth minute when Denis Zakaria rifled a first-time shot from 25 meters low into the corner of the net.

After a video review lasting 1 minute, 45 seconds by the Slovenian match officials, the goal was disallowed for offside. It was either for Xherdan Shaqiri blocking the view of goalkeeper Bailey Peacock-Farrell or a marginal call against full back Kevin Mbabu receiving a long pass out of defense to begin the attack.