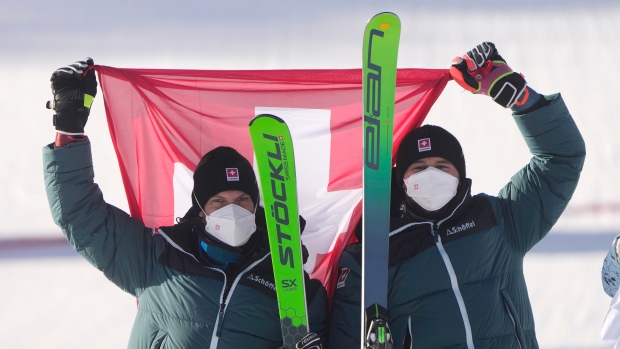 Ryan Regez led a 1-2 finish by Switzerland in the Olympic skicross final at Genting Snow Park.

Regez grabbed the lead early and never relinquished it along a course filled with bumps, jumps and rolling terrain. He raised his arms in triumph shortly after crossing the finish line.

As a kid, Regez always thought his future was in Alpine skiing, more specifically the downhill. When that didn’t pan out, he started an apprenticeship as a structural draftsman before discovering skicross.

It paid off in gold.

In the small final, Italian skicross racer Simone Deromedis won the heat with a little bit of flair. He was coming off the last jump and did the splits before crossing the finish line.

Canada's Brady Leman, the gold medalist from PyeongChang in 2018, placed second in the small final to finish sixth.