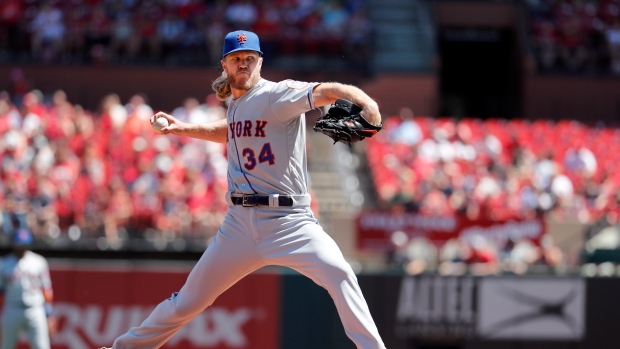 ST. LOUIS — Noah Syndergaard has found his health, and even a little bit of luck at the plate, but he's still off to a vexing start to the season.

Paul Goldschmidt drove in two runs and Syndergaard hit a home run with Dexter Fowler's help, but he struggled on the mound as the St. Louis Cardinals beat the New York Mets 6-4 on Sunday.

"My frustration's pretty high right now," Syndergaard said. "It would have been a great win today, but I let the team down."

Syndergaard (1-2) allowed six runs, four earned, on eight hits in five innings, but his most memorable play came while batting in the fourth. He hit a deep flyball to centre that Fowler leaped for on the warning track even though it was well below the fence. The ball deflected off Fowler's glove and over the wall for Syndergaard's fifth career homer and first since Aug. 16, 2016, at Arizona.

It was one of four homers on the day for the Mets, but that wasn't enough for Syndergaard, who has allowed at least five runs in his last two starts after not having given up five in a game since April 30, 2017, at Washington.

"He got mad at me when I took him out, which is great. It's not like he's shying away," Mets manager Mickey Callaway said. "He wants to go out there and compete and guys have bad stretches. This is probably the worst stretch he's had in his major league career when he's been healthy, so he'll bounce back from it."

Dakota Hudson (1-1) allowed three runs on five hits in five innings, striking out five, for his first career victory as a starter. He went 4-1 in 26 appearances, all in relief, as a rookie last season.

"It's big, getting my confidence going a little bit, getting everything kind of together," Hudson said. "But now I can say, hey, I'm a starter, I've gotten a win as a starter and kind of gotten my feet under me a little bit."

Jordan Hicks pitched a scoreless ninth for his fifth save in six chances. His last fastball measured 104.2 mph, the hardest in baseball this season. Hicks reached 105.1 mph last year, tied with Yankees closer Aroldis Chapman for the fastest pitch ever.

Robinson Cano homered for the Mets but left in the seventh after he was hit in the right hand by a pitch from Andrew Miller. Third base umpire Paul Emmel ruled that Cano swung before the ball hit his hand and called the pitch a strike.

"He started his swing," Emmel told a pool reporter. "Pitch hit his hands, followed through with his swing, the ball actually went into fair territory. Bruce (Dreckman), the home-plate umpire, didn't see the end of the swing so he called a hit batsman and was giving him first base. During the injury, then Bruce and I communicated which we're supposed to do. So appeal on the check swing, so he went through with his swing."

Callaway was ejected for arguing the call. The ejection was the third of his career. X-rays on Cano's hand were negative.

"I was shocked, to be honest," Callaway said about the call. "I was trying to figure out what we're going to do the rest of the game, who's going to pinch run for Robby, and they mosey on down and say that he swung."

Kolten Wong's RBI single in the second tied the game at 1-1, and he advanced to second after Brandon Nimmo's throw to the plate wasn't cut off. Hudson reached on an error to load the bases, and Goldschmidt singled two batters later to make it 3-1.

The Cardinals went ahead 5-1 on Molina's RBI groundout and Fowler's run-scoring double in the fourth.

"It's a good offence," Cardinals manager Mike Shildt said. "Syndergaard made some really tough pitches first inning, and we didn't get sideways about it, kept the approach, had a great approach. Guys were really locked in and stayed to the middle of the field with a couple big two-out hits."

Mets: INF Todd Frazier (left oblique strain) went 0 for 2 in a rehabilitation appearance at Syracuse and may be activated before Monday's game against Philadelphia.

Mets: LHP Steven Matz (1-1, 4.96 ERA) starts against the Philadelphia Phillies on Monday as New York begins a 10-game homestand. Matz allowed eight runs without recording an out in his previous start, at Philadelphia on April 16.