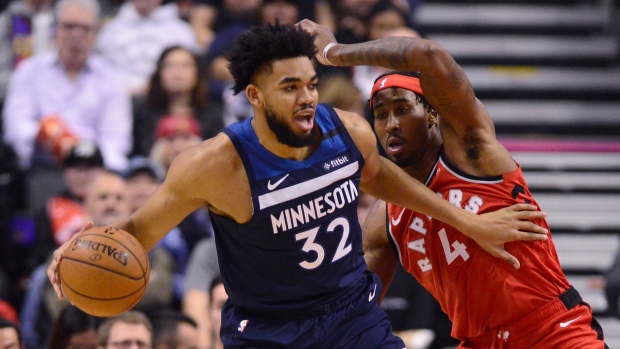 MINNEAPOLIS — Minnesota Timberwolves centre Karl-Anthony Towns will sit out for at least two more weeks because of an injured left wrist that the team announced Friday is broken.

Towns first had an X-ray after hurting his wrist Jan. 25 against Oklahoma City, coach Ryan Saunders said. Towns played through discomfort in the next six games, posting 20-plus points and 10-plus rebounds in five of those, but he was ruled out of Minnesota's last game before the All-Star break with the injury. Further evaluation by multiple medical specialists revealed the fracture, the Timberwolves said.

Towns will be re-evaluated in two weeks and his playing status reassessed, meaning his absence will total at least 10 games. Towns missed 15 games earlier this season with a left knee injury. He played in all 82 games in each of his first three seasons and 77 games last season.

“Karl’s done everything to play through any type of pain, and he’s put the team first," Saunders said. “You can’t say enough positive things about the way he’s done that. We want to make sure we take care of his body, too."

The Timberwolves have the fourth-worst record in the NBA entering their game Friday against Boston. Saunders said the standings wouldn't influence the team's decision on when to bring Towns back.

“When he’s healthy enough, we’ll be able to make those decisions, but make no mistake, we’re a group that is competing,” Saunders said.