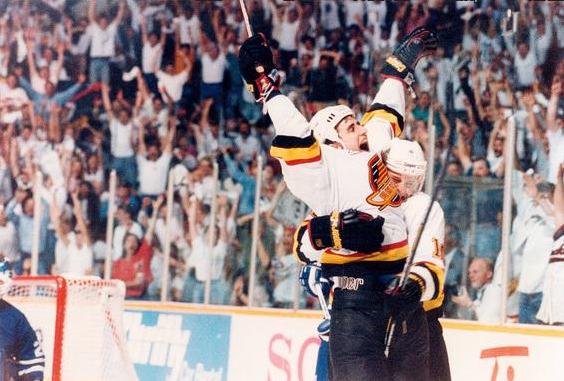 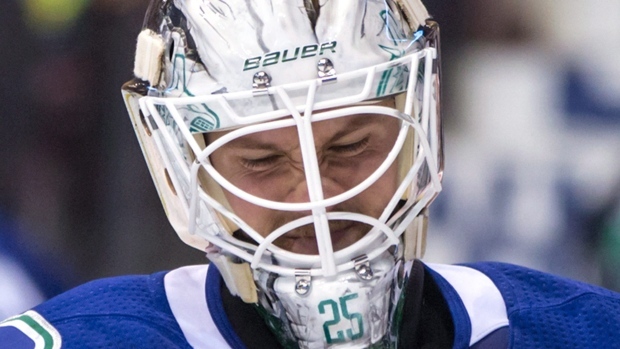 1) The Canucks were game on Saturday night, but the better team ended up winning. As they have all season, the Canucks played the Flames tough. However, the Canucks simply aren't good enough to overcome the mistakes they made on each of the Calgary goals. Guillaume Brisebois turned the puck over after the Canucks had won a face-off deep in their own zone on the 1-0 goal. Luke Schenn handed the puck away in the neutral zone and then ended up screening Jacob Markstrom on the Flames 2-0 goal. And after Brock Boeser had scored a power play goal early in the third to give the Canucks hope, Jake Virtanen opted not to finish a check on Mark Giordano who held the puck in at the Vancouver blueline and set up Andrew Mangiapane for the 3-1 dagger. Mistakes happen. But good teams also capitalize on those miscues and that's what Calgary did to the Canucks on Saturday night.

2) The Canucks top scorers continue to produce. Boeser scored for a second straight game giving him 25 goals on the season and three power play goals in his past six games and four goals overall in his last seven outings. With the goal, Boeser extended his personal point streak to nine games (4+6=10). Saturday's goal was set up by Elias Pettersson who is now on a five game point streak (1+5=6). So that is encouraging. As is the fact, the once ice cold power play is suddenly red hot striking for the sixth time in six games and going 6/18 (33.3%) over that span. The Canucks top end held its own against Calgary's best scorers. The difference in the game was lower in the line-up as the Flames got a pair of goals from a fourth line that is coming on and captain Mark Giordano was terrific figuring in all three Calgary goals -- opening the scoring and then adding a pair of primary assists to give him 72 points on the season. That is more than the top three Canuck defenders combined (Edler 29, Hutton & Stecher 20 apiece).

3) The Canucks received all kinds of help on the out of town scoreboard Saturday, but ultimately they were unable to help themselves. After Chicago, Minnesota, Dallas all lost in regulation time and Arizona and Edmonton settled for single points, the Canucks had a glorious chance to make up ground on five other teams in the Wild Card chase. When Boeser scored to get the Canucks on the board and give them life at 2-1, it had the feel of many other games this season where the Canucks completed the comeback and at the very least forced overtime. But at 2-1, the Canucks really didn't do much to generate much in the way of threats to tie the game. And while they outshot the Flames 13-9 in the final period, the Canucks had just one high-danger scoring chance over the final 20 minutes according to naturalstattrick.com. With just seven games remaining, the Canucks are further from a playoff spot than they were when the day began. That's because Colorado beat Chicago to leap over both Minnesota and Arizona. The Canucks head to Sunday six points back of the Avs, but need to gain seven points on them since Colorado holds the tie-breaker. Plus there is that traffic jam sandwiched between the Avalanche and Canucks. In other words, the playoff dream is dead now -- if it wasn't already.

4) The Canucks need more from Josh Leivo. He's playing in a prime spot along side Elias Pettersson and Brock Boeser and also getting quality time on the first unit power play. The big winger has now gone eight games since scoring his last goal (against Toronto on March 6th) and has just 2+2=4 in his last 19 games. It was last Sunday in Dallas, that Travis Green came armed with statistics to support his case that Nikolay Goldobin wasn't doing enough to stay in the league. The coach then cited Goldobin's 2+2=4 in his past 23 games. Leivo has been a solid addition to the Canucks and should be viewed as part of what the team is trying to put together moving forward. But if Goldobin's production is unacceptable, then Leivo's is certainly open to scrutiny, too. He is strong on puck retrievals and has shown an ability to use his size as an effective net front presence. He has a quick release and heavy shot and has shown it at times since arriving from Toronto. But when it comes to a bottom line, there hasn't been much of one of late. On Saturday against Calgary, he managed just one shot on goal and one other attempt.

5) I'm not here to suggest that it's time to take Leivo out of the line-up. But I do expect Travis Green to make changes for tomorrow night's game against Columbus. He opted not to make any switches other than in goal last Monday in Chicago after the team had played in Dallas the night before. And those 18 skaters rewarded the coach's faith by beating the Blackhawks in overtime. Now, the Canucks are coming off a loss in which not enough players pulled their weight or made an impact. With three healthy forward options, Green has to look at injecting fresh legs into a line-up that will have played seven games in 10 nights tomorrow including a pair of back to backs. That's a lot to ask of players. So why not insert Nikolay Goldobin, Ryan Spooner and Sven Baertschi and look at sitting any of Tim Schaller, Loui Eriksson, Tyler Motte or Markus Granlund? It's almost a certainty that Thatcher Demko will get the start in goal -- his fourth straight on the back end of team back to backs. But the changes ought to go much deeper than that. With their effort on Saturday, not enough players earned the right to suit up again on Sunday night.