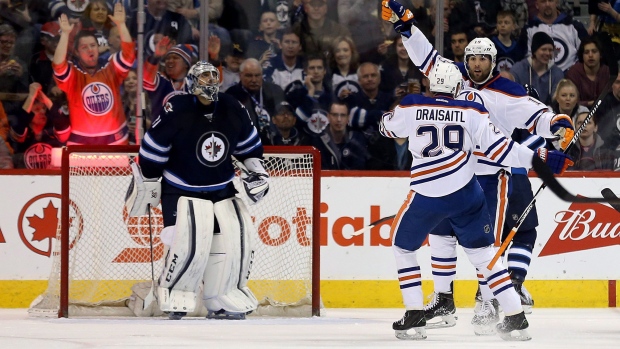 WINNIPEG - For Patrick Maroon and the Edmonton Oilers, getting back to the basics has helped fuel their recent string of success.

Maroon, who opened the scoring in Sunday night's 2-1 win over the Winnipeg Jets, said playing a "meat and potatoes kind of game" guided his team to three wins on their recent four-game road trip.

"We've been harping on that. We got to continue that because it's been working for us," Maroon said. "We played really good even though we gave up 40 shots. We got pucks deep and we grinded them down low."

Lauri Korpikoski's go-ahead goal late in the second period proved to the be the game winner and Cam Talbot made 39 saves for the Oilers (26-35-7), including a sprawling glove save midway through the third period to retain the lead and earn his 16th win of the season.

"When a goalie gets on a roll, sometimes the puck seems a little bigger and when you're not seeing the puck well, you can struggle," Talbot said. "Luckily for me, it's going in the right direction right now and I'll try to keep it going as long as I can."

Winnipeg (27-33-5) got its lone goal from Mark Scheifele, who continued his torrid scoring pace with his 21st. Ondrej Pavelec allowed two goals on 31 shots in the loss.

"We had some really good chances to score but our mentality needs to be to create more traffic," said Jets forward Adam Lowry. "Our defence did a great job tonight getting pucks to the net. It's on the forwards to get those second and third opportunities."

The Oilers moved out of the basement in the Western Conference ahead of Calgary and are tied with the Jets with 59 points.

Taylor Hall, working behind the goal line in Winnipeg's zone, found Maroon on Pavelec's doorstep and Maroon fired home his sixth of the season for the 1-0 lead at 5:25.

"We tried to adopt that scrappy, hard and tenacious style heading into Los Angeles (two weeks ago) and guys bought into it," said Oilers head coach Todd McLellan.

"It's not always pretty and we do get outshot at times but we're finding ways to win with what we've got and the guys are proud of that."

The lead was short-lived, however, as Scheifele tied it up 1-1 with his ninth goal in his last nine games 51 seconds after Maroon scored.

Blake Wheeler, who streaked down the right side and found Scheifele sitting alone in the slot for sixth goal in the last three games, set up the goal.

The Oilers scored the eventual winner before the period was through.

Andrej Sekera made a slick move to funnel down toward the Winnipeg goal and found Korpikoski, who on one knee jammed home a loose puck in the slot for the 2-1 lead at 16:20.

Scheifele nearly tied the game with seconds left but his blistering wrist shot hit the crossbar.

"I hate the posts," Scheifele said. "I had a pretty good angle at it. I thought it was definitely going in. It's a pretty heartbreaking sound to hear."