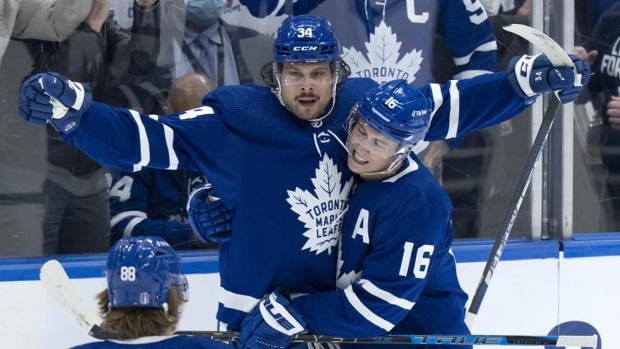 Our five-part talent tiers series concluded Wednesday after grading goaltending across the 32 National Hockey League teams. Today, we summarize the results across the positional groups, with a focus on the positives and the areas of concern for the seven Canadian teams.

As a housekeeping matter, if you missed any part of the series, the positional group pieces are linked below.

Let’s run through the aggregated results. We will take another run at the tiers at the halfway point of the regular season, with a couple of tweaks – notably, consolidation of the left wing and right wing positions into a broader ‘wing’ category to avoid position interchangeability issues. 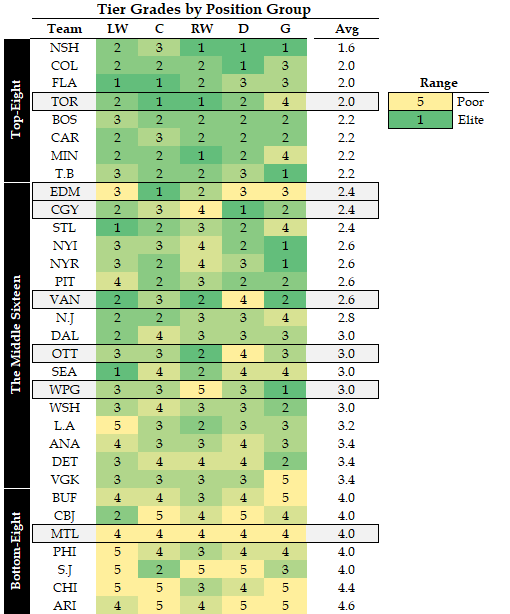 The Canadian teams were generally well represented in the talent tiers – the Toronto Maple Leafs were the highest-graded team of the seven, but the Edmonton Oilers and Calgary Flames were also inside of the top 10 – Edmonton through the absolute strength of the team at the centre position; Calgary, for what they can do defensively.

Notably, three other teams finished in the playoff contention window, the Vancouver Canucks (No. 15), the Ottawa Senators (No. 18), and Winnipeg Jets (No. 20). Across these teams, it was generally one core weakness that drove their overall grade towards the middle of the pack. Bringing up the rear is a rebuilding Montreal Canadiens team (No. 28).

In reverse order, let’s start with Montreal and work our way up.

What We Liked: Martin St. Louis and the rest of the Canadiens organization need this season to evaluate the core parts of the roster and decide which players will still be in stow when the team is ready to contend. If there is an area to be bullish with this group, it is down the middle of the ice. Nick Suzuki is a bona fide top-six centre already. Christian Dvorak is more than serviceable, and he is under team control for three more seasons. Restricted free agent Kirby Dach is an interesting reclamation project if you can call him one – we haven’t seen much production from Dach at the NHL level, but he’s also 21 years old and spent his first three seasons with Chicago. Enough said.

Cause For Concern: This is a franchise in the throes of a serious rebuild and to say the talent is thin across the lineup would be an understatement – the Canadiens graded Tier 4 (underperform) across all five categories, and in a couple of instances came close to slipping into Tier 5. The most generous of the grades was on the blueline, where I expect newly acquired Mike Matheson to do some heavy lifting. Matheson was great for Florida and Pittsburgh in previous stops, but he’s also joining a thin group down three key contributors from last year – Jeff Petry, Brett Kulak, and Alex Romanov.

What we Liked: We don’t like Connor Hellebuyck, we love Connor Hellebuyck. And for as long as Winnipeg has Hellebuyck in net, they will always be a goaltender heater or two away from qualifying for the postseason. If there’s a Mount Rushmore of active NHL goaltenders, he is on it. The only question is if he’s Thomas Jefferson or Abraham Lincoln. Winnipeg was one of five Tier 1 teams in net.

Cause for Concern: Winnipeg’s depth chart at right wing is dire, no matter how you draw the lines up. They sorely need former first-round pick Cole Perfetti to explode in his rookie season (Perfetti did have a cup of coffee with the Jets in 2020-21, with seven points in 18 games).

What we Liked: There is plenty to like, maybe even love, on one of the league’s busiest teams this off-season. But the two additions up front in Alex DeBrincat and Claude Giroux were pivotal; DeBrincat gives Ottawa some serious scoring juice inside of the top six, and Giroux providing some playmaking on the other side of the ice. Giroux also gives Ottawa a nice hedge against any sort of regression from the likes of Drake Batherson or Mathieu Joseph, two young players, and allows the Senators to dress a capable third line.

Cause for Concern: This is a playoff-calibre lineup with a draft lottery blueline. You cannot have Travis Hamonic, Nikita Zaitsev, and Nick Holden playing full-time minutes on a team with postseason expectations. The Jakob Chychrun trade rumours will continue until Chychrun is traded elsewhere or Ottawa finds another option.

What we Liked: Just look at the grades for the forwards in Vancouver. It’s a group of quality skaters who can play multiple positions up top, but more importantly it’s a collection of skilled attackers who can play with pace and create their own offence. If you just looked at the forward composition across all 32 teams, the tiers would have Vancouver eighth overall, tied with teams like the Boston Bruins and Carolina Hurricanes. Elias Pettersson, J.T. Miller, Conor Garland, Bo Horvat, Brock Boeser – there is plenty of firepower here, and more on the way.

Cause for Concern: The problem is these forwards have a whale of a time generating sustained offence compared to those in Boston or Carolina – it’s a curious dichotomy between an obviously skilled group and one that’s not been very successful at finding the back of the net, just 17th in all situations scoring over the past two seasons. I agree with The Athletic’s Thomas Drance on a key point: This beleaguered, one-man-band defence that Vancouver has strung together doesn’t just struggle to protect Thatcher Demko in net, they are ineffective at transitioning the puck and force the forwards to play a lot deeper than they would probably like in the defensive zone.

What we Liked: The Flames have Darryl Sutter as a head coach, Vezina Trophy runner-up Jacob Markstrom in net, and a Tier 1 blueline that can dress three quality pairings when fully healthy. I know there is a lot of consternation about what the Flames have done this summer, losing Johnny Gaudreau to the Columbus Blue Jackets at no charge, then the forced trade of winger Matthew Tkachuk. But the backbone of what made this team tough to beat last year – conceding just 2.4 goals against per game, second to only Carolina – is still in place, and in a weaker Pacific Division, I still expect the Flames to qualify for the playoffs.

Cause for Concern: The right wing situation isn’t dire, but the trio of Tyler Toffoli, Blake Coleman and Dillon Dube is going to have to carry more of the load this time around. I’m also curious to see what Sutter thinks about the combinations. If Coleman skates with the likes of Andrew Mangiapane and Mikael Backlund (which was a fantastic two-way trio last year), then it seems inevitable Toffoli will see real time with gifted playmaker Jonathan Huberdeau.

What we Liked: They have two of hockey’s four best centres in Connor McDavid and Leon Draisaitl, which remains the most comical positional advantage any team carries in the NHL. But I mentioned it in my centres piece and will again here: The Oilers are likely a Tier 1 team at centre regardless of who they dress further down the lineup, but Ryan McLeod and Derek Ryan are perfect pivots for a bottom six that’s finally seen a talent influx in recent years. Plus, their emergence allows for a player like Ryan Nugent-Hopkins to flex out onto the wing as needed. The Oilers are a bit less top-heavy each season, and that’s a good thing.

Cause for Concern: The Oilers may be the second-highest graded Canadian team, but they are probably the team with the fewest question marks. Still, I think their big signing of Jack Campbell – his five-year, $25-million dollar deal opens this season – will be closely watched. For all of Mike Smith’s flaws and sometimes bizarre puck-handling gaffes, he was effective for Edmonton two years in a row, stopping nearly 92 per cent of shots faced. Campbell, meanwhile, is coming off a disappointing 49-game season with Toronto. Campbell was eight goals worse than expected, which was good for 51st in the NHL amongst qualified goaltenders, sandwiched between Buffalo’s Craig Anderson and Philadelphia’s Martin Jones. That doesn’t track with Campbell’s broader career trajectory, so the hope is his miscues from a year ago were an outlier to the downside. We will see how he pans out in Edmonton.

What we Liked: I said it in the defencemen piece, but I will reiterate it word for word here – Kyle Dubas’ masterclass has been on the blueline, where the Maple Leafs can now run three credible pairings, including a depth pairing anchored by Mark Giordano. “Kyle Dubas doesn’t get enough credit for what he’s done with the defensive group, turning it from a laughingstock in years past to a reliable group. (If you hate Toronto, you’ll want to come back around for the goalie tiers.) They have three deep and capable pairings, and this roster doesn’t even include restricted free agent Rasmus Sandin, who will need a new deal before the season starts. Sandin and Timothy Liljegren both would seem to feature in this lineup full time next year, so I’d keep an eye on Justin Holl, who may be the odd man out.”

Cause for Concern: I don’t think it’s an understatement to posit this gamble in net, between a roller coaster ride in Matt Murray and a goaltender with very little track record of success in Ilya Samsonov, could not only sink this team’s Stanley Cup hopes but act as the impetus behind serious organizational change. It is that risky. Over the past three seasons, here is where Murray and Samsonov sit by goals saved versus expected, minimum 1,000 shots faced: Murray, 70th of 81, most comparable to 39-year-old Brian Elliott, and Samsonov, 55th of 81, most comparable to Vitek Vanecek and Aaron Dell. The glass-half-full version of this story is Murray finally found his game towards the end of last season with Ottawa, and Samsonov is still exceptionally young, likely with untapped upside. But again, this is risky.

Hope you enjoyed the series!