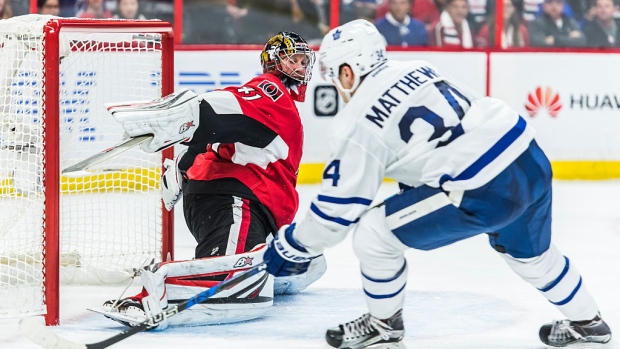 All National Hockey League teams are challenged with the question of how best to allocate salary in a hard cap environment. For the 2018-19 season, that means teams must spend at least $58.8 million (the cap floor) on player payroll, but no more than $79.8 million (the cap ceiling).

The allocation question is a fascinating one because teams have different visions on how best to construct a Stanley Cup-calibre roster. Some organizations consistently run top-heavy payrolls that see superstars eat into huge portions of the available cap space. Other organizations, perhaps borne out of the necessity of not having superstar players available, prefer flatter spending across the board. Some teams will carve out large pieces of their cap space for their forward group – others, the same, but for defencemen or goaltending.

Now that it’s mid-August and most restricted free agent arbitration cases have resolved, we have a general sense of what each team’s cap position will be entering the 2018-19 season. As is the case every year, there’s a pretty significant divide in player payroll. Contending teams like St. Louis, Pittsburgh, and Washington have $1 million or less in cap space to work with. More fiscally conservative teams like New Jersey and Carolina have nearly $20 million in space. Then there are teams like Toronto that are flush with cap space (about $14 million today), but know full well that much of that will be utilized to retain future free agents like Auston Matthews, Mitch Marner, Jake Gardiner, and so on.

With this off-season wrapped up, I wanted to take a look at how teams decided to their cap space by position. The table below shows positional spending for every team in the league under the $79.8 million cap ceiling. It also shows each team in comparison to the league average, which as of today sits as follows: $42 million for forwards, $22 million for defencemen, $7 million for goaltenders, and about $9 million in unallocated cap space. 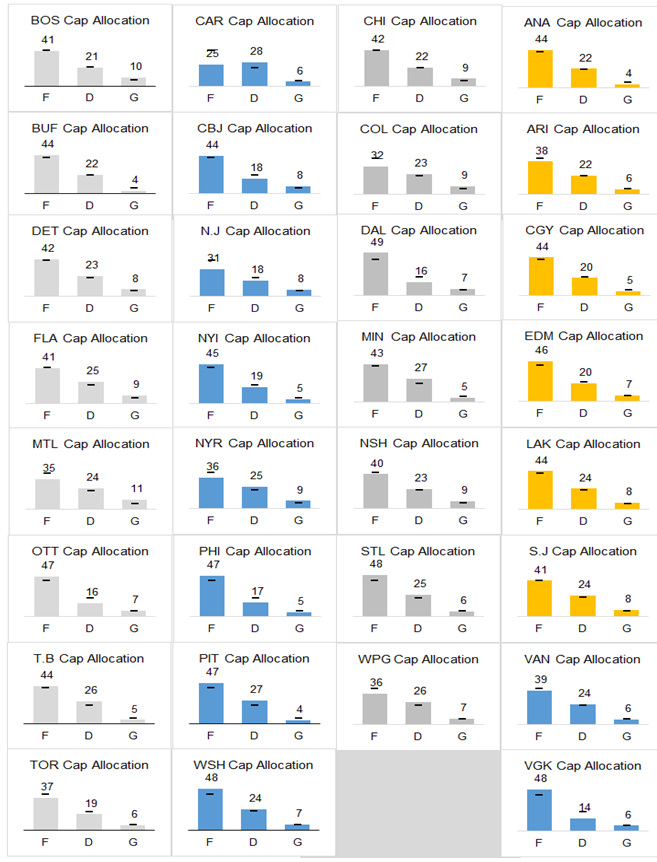 A few thoughts, in no particular order:

- Perhaps the most fascinating cap situation involves the Carolina Hurricanes. Obviously they are in a full-blown rebuild, keyed by new ownership and management groups. Part of that transition has created a funky cap situation for this season – one that sees their defensive group ($28 million) paid more than their forward group ($25 million). Their blueline, as of today, is actually the highest-paid group in the league. It’s one of the big reasons why Justin Faulk’s name has frequently been on the trade block – he’s a valuable right-shot defenceman who has been played out of his position by the growth of guys like Jaccob Slavin and Brett Pesce, plus the acquisitions of top-four types like Dougie Hamilton and Calvin de Haan. On the other side of the equation, Carolina has only one forward paid more than $5 million a year – that’s captain Jordan Staal, who is signed through 2022-23.

- The Dallas Stars are the only team spending more money on their forward group than the Vegas Golden Knights. Yes, David Clarkson’s contract – though he’s on injured reserve – still impacts the cap, but a lot of their cap growth came at the cost of being a Stanley Cup finalist last season. Jonathan Marchessault, William Karlsson and Tomas Tatar all commanded big raises and the team strategically pursued playmaker Paul Stastny during the off-season. Despite not having an obvious superstar with a heavily burdensome deal on the books, it’s worth noting that Vegas’ top-six will alone command $30 million, or 38 per cent of the cap. The team still has plenty of cap space available – thanks in part to an inexpensive blueline, though Shea Theodore is still up for an extension – but it’s certainly a different financial position than the one they were in a year ago.

- I mentioned it earlier, but the Maple Leafs are in a quirky position. They have a ton of cap space, but that should be short-lived due to the sheer number of upcoming restricted and unrestricted roster players in 2019-20. Still, that does make Toronto prime for rentals at the trade deadline. Cap space in 2018-19 is a non-issue and the Maple Leafs will be in as strong a position as any team in the league to squeeze any positional player onto their roster in February. A luxury that, say, division rival and fellow Stanley Cup contender Tampa Bay may not have.

- The reverse is true for the Ottawa Senators. Ottawa is actually carrying $73 million of cap into the 2018-19 season, but an impressive amount of that is tied up in expiring contracts. They stand to shave $35 million in cap next off-season, which seems like a major victory for an organization that appears ready to rebuild with a budget-friendly roster. The only issue, of course, is a lot of the money coming off of the books is because their best players are reaching expiry on their current deals. Erik Karlsson, Mark Stone, and Matt Duchene – arguably the team’s three most talented skaters – all are set to hit unrestricted free agency next summer. The only long-term deal left on the books is tied up with Bobby Ryan, who will post a $7.2 million hit through 2021-22.