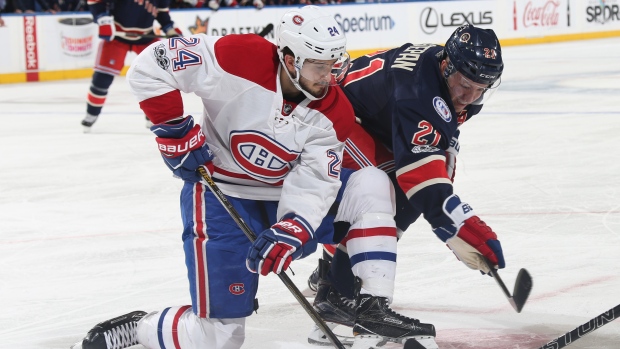 Last week, we discussed whether or not regular-season success against a given opponent was repeatable during the postseason. The short answer was yes: Teams who outscored a given opponent during the regular season went on to beat that same opponent in the playoffs about 65 per cent of the time.

The genesis of that post was the discussion around the Montreal Canadiens’ potential playoff matchups, and whether or not it was in the team’s best interest to win the division. Doing so would mean drawing the New York Rangers, a team that has won more games and accumulated more points than the Habs during the regular season. But, the Canadiens have also beaten up on the Rangers this season, and the stats – at least descriptively – seem to suggest that such an advantage matters a fair bit in the playoffs.

It dawned on me though that there are an awful lot of interesting matchups – ones you’d want to see if you are a fan, or perhaps one you’d want to avoid – outside of Canadiens/Rangers. So what I’ve done below is rolled up the head-to-head performance, by conference, of every conceivable playoff matchup based on goal and shot differentials for the 2016-17 season.

As you might have expected, there are a few head-to-heads that have appeared strikingly one-sided.

What you want to see here is a team that both outscored and outshot their opponent – a strong indicator that not only did the team win the majority of the games, but that they generally outplayed their opponent on that night.

One of the most noticeable teams in these buckets is the aforementioned Rangers. We talked about their head-to-head against the Canadiens maybe being an unfavourable draw, but look at how they have performed against the rest of the Metropolitan Division. They haven’t outscored a single team there all season, and a couple of the matchups – the Penguins are the most obvious – seem brutally tough. On the other hand, in a relative sense, they have clearly played better in matchups against the Atlantic Division’s Senators and Maple Leafs. If you’re head coach Alain Vigneault, do you trade a marginally tougher first round one for an easier round two? I think the answer is yes.

The Boston Bruins are by far the biggest X-Factor here. We’ve talked about them a lot this year but percentage-wise, they’ve gotten next to nothing in the shooting department or save percentage department. On the other hand, they mercilessly have outshot teams under both of their head coaches. If they fix one of the two and are still getting 55 per cent or so of the shots, well, look out.

Eyeballing both metrics, I’ve created a quick summary of ideal teams to draw/ideal teams to avoid. Below, you’ll see a “Play” indicated if a team both outshot and outscored their opponent over the season. You’ll see an “Avoid” if the reverse is true. 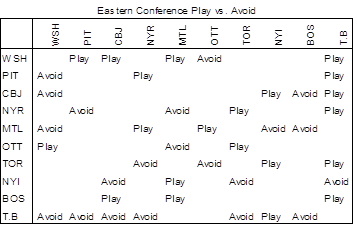 On to the Western Conference (I’m including Los Angeles because they aren’t technically dead and, well, I’m in a good mood.)

On the goal side, my eyes are immediately drawn to the Battle of Alberta. For as much as I have fawned over the Flames this season, it’s kind of hard to ignore the fact that they have posted some ugly head-to-head goal-differentials with their Alberta neighbour – primarily driven by the fact that they conceded seven goals twice in the season series. While the Flames did get a big chunk of the shot share against the Oilers, a large piece of that is surely because Calgary was chasing so many of those games from behind.

Another interesting thing to note here is on the St. Louis side. The Blues have really had an up-and-down regular season – they fired their coach midway through the season, primarily because their goaltenders couldn’t stop a shot over a 40-game stretch. I don’t think anyone excuses the Blues for the quality of last season's team, but they do have some reasonable success this season against a couple of the conference's heavyweights in Chicago and San Jose. Of course, the other side of that is they’ve been hammered by divisional rivals like Minnesota and Nashville

And again, here’s the play versus avoid table for the West, same rules applying as above: 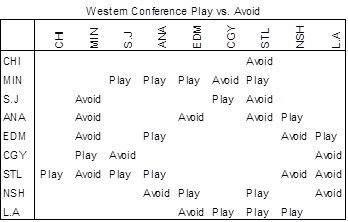 Hopefully you all are as excited about the next two weeks – and the associated playoff matchup jockeying – as I am. There are certainly some series that look more and more likely by the day, and it’ll be fascinating to see how they play out.