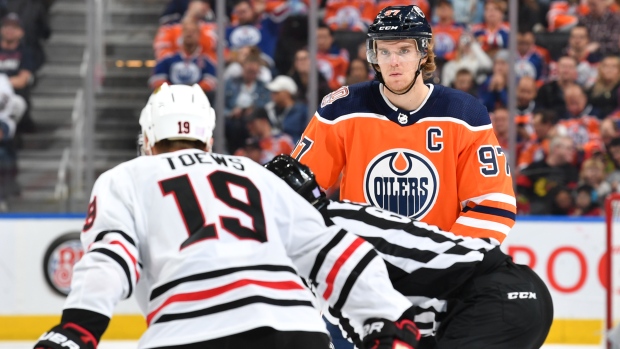 Today we look at a third Western Conference matchup, one featuring the fifth-seeded Edmonton Oilers against the No. 12 Chicago Blackhawks. 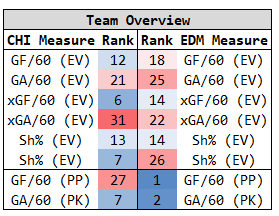 When we talk about teams in the upper echelon of the NHL standings – the teams that were surefire bets to make the postseason at the time the regular season stopped – we generally see a common theme of strong even-strength play and high-end goaltending. But for every rule there is an exception, and that certainly applies to the 2019-20 Edmonton Oilers.

The Oilers were arguably the league’s most fascinating team this year. Between Connor McDavid (97 points in 64 games) and Leon Draisaitl (110 points in 71 games), the Oilers house two of the league’s most electric offensive weapons. Draisaitl is a certain Hart finalist and perhaps the favourite to win it, depending on how you feel about New York Rangers forward Artemi Panarin and his contributions on a team that was more likely than not to miss the playoffs.

Their penalty kill was just as fantastic – the goaltending tandem of Mikko Koskinen and Mike Smith tandem held opponents to just 9.3 per cent shooting, the lowest rate in the league.

So, what held Edmonton back this season? Defence, defence, defence – particularly at even strength. Teams scored on Edmonton’s first line just as efficiently; Draisaitl ended the season seven goals in the positive at even strength, McDavid just five. More than half of the roster was underwater, with depth players like Josh Archibald (-16), Jujhar Khaira (-19), and Riley Sheahan (-20) getting crushed most of the year. Some of this is the nature of playing such a tempo style of hockey, but the reality is their defensive lapses probably cost them the divisional race against Vegas.

But if Edmonton’s defence was lacklustre, there isn’t an appropriate word to apply to Chicago. The Blackhawks have been nightmarishly bad on the defensive side of the ice for a few years now, with their veteran core showing real signs of aging and degradation.

The Blackhawks finished last in expected goals against at even strength, 29th in all situations. Without Robin Lehner and Corey Crawford bailing this team out on a regular basis over the regular season, they would have been comfortably in the lottery draws.

Just look at where the shots came from when Chicago was defending the run of play: 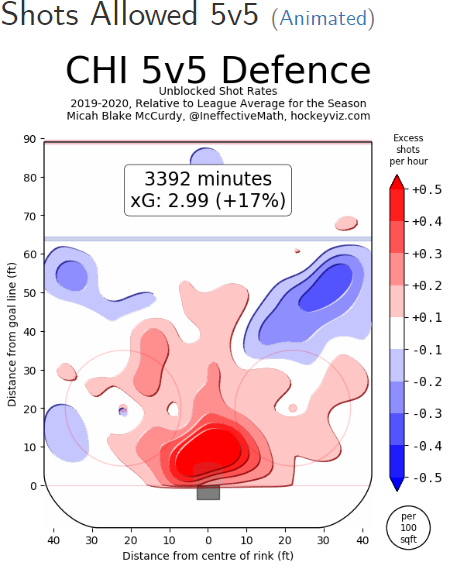 While this team remains a defensive disaster, they still are quite efficient attacking – Patrick Kane (84 points in 70 games) picked up right where he left off last season, and players like Dominik Kubalik and Alex DeBrincat have developed into very capable secondary scorers.

In summary: don’t expect either defence to look good in this series. The offensive weaponry is too impressive for both sides, and the defensive zone play is, well, the opposite. 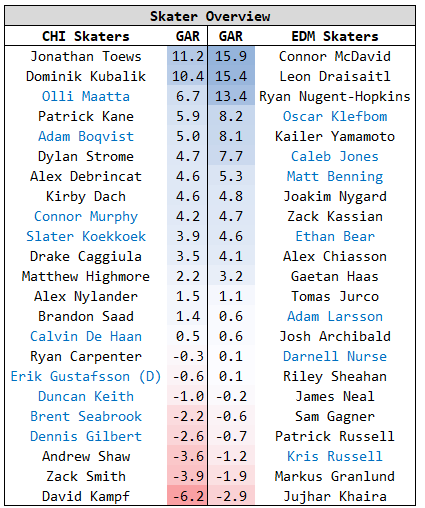 Two names that I want to bring attention to: Chicago’s Jonathan Toews and Edmonton’s Ryan Nugent-Hopkins.

Toews has been long regarded as one of the league’s premier two-way forwards, but in recent times he has lost some of the competency in his supporting cast and the numbers have cratered in the process. If you look at goal differentials with Toews on the ice for Chicago over the years, you can see quite the downward trend: 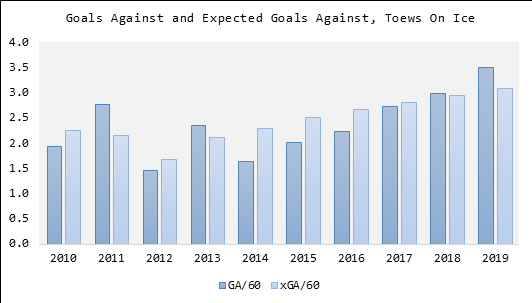 Putting this all on Toews’ shoulders would be completely unfair – he’s aged 10 years in the process and used to have wingers like Marian Hossa on his hip and defenders like Duncan Keith and Brent Seabrook in their playing primes. Regardless, it is quite hard to win games on a regular basis when you are bleeding goals, and the expected goal numbers only emphasize that this is a skater problem, not a goaltending one.

But at the end of the day, it’s all about net goals. If you are going to struggle defensively, you better fill it in offensively. The Blackhawks did precisely that with Toews on the ice, scoring a whopping 3.8 goals per 60 minutes at even strength this year. Head coach Jeremy Colliton put his better offensive weapons – the aforementioned Kubalik and Kane, as well as winger Brandon Saad – on Toews’ hip, and it paid dividends. It was quite an atypical season from Toews in that sense, but one that helped Chicago stay afloat in the standings.

Speaking of strong performances, it would be remiss to not mention Nugent-Hopkins. Perhaps the most important development for the Oilers this season was a decision by new head coach Dave Tippett to blend him into a bigger offensive role, armed with Draisaitl and a very intriguing second-year pro in Kailer Yamamoto.

In the 25 games we saw this grouping, the trio outscored their opponents 28-8 (+20). And while Draisaitl understandably gets most of the praise for his finishing work, it should not be lost that Nugent-Hopkins was an extremely capable eraser in the neutral and defensive zones – the type of defensive eraser that Draisaitl still probably needs at this point in his career.

Lehner (91.8 per cent stop rate) was sent to the Vegas Golden Knights in a deadline deal, netting the team a valuable second-round pick. At the time, the move was a no-brainer: Chicago’s playoff chances were infinitesimal, Crawford was playing well enough to hold the Chicago net for the remainder of the regular season, and Lehner (one of the better goalies in the entire NHL over the past few seasons) was a very valuable trade commodity.

With zero competition and a solid season from Crawford, Colliton’s goalie decision is quite easy. But it would have been interesting to see if Colliton would have went with the Swede if he was still on the roster.

Edmonton has a similarly easy decision, but for different reasons. Koskinen outplayed Smith over the course of the season; one could argue that the Smith gambit may have cost the Oilers the top spot in the divisional race, with a 90.2 save percentage (comfortably below league averages) in 39 games.

Even adjustments for shot quality do not help Smith’s cause. The math there suggests that teams scored about seven more goals on Smith than they should have based on shot locations, angles, and distances. Compare that to Koskinen, who saved more than five goals above expectations against a similar shot profile. Smith may be the veteran presence, but that presence belongs on the bench for this series.

Barring injury or a radical coaching decision, we should expect Crawford versus Koskinen here.

You can look at some of the other play-in teams and see ways that the Blackhawks can pull off an upset. Not here. Edmonton is too fast, too skilled and too dangerous offensively for such a porous Chicago team.

Assuming the Oilers make the right decision in starting Koskinen over Smith, I don’t give the Blackhawks much of a chance, unless Crawford – who is certainly capable – goes on a five-game heater.

The second round will get very dicey for the Oilers, depending on their opponent. But they should cruise here. The pick is Edmonton in four.