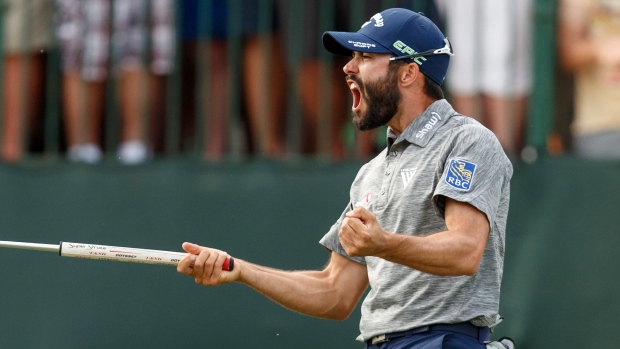 Adam Hadwin is heading back to the Presidents Cup and this time, he’d like to be on the winning side.

On Wednesday evening, the Abbottsford, B.C., product was named to the International team by captain Ernie Els as one of four picks, joining Jason Day, Sungjae Im and Joaquin Niemann.

“I wasn’t quite sure it was going to happen, to be honest,” said Hadwin. “There were a lot of players playing really well these last few weeks and I truly felt Ernie’s decision could have gone either way.”

It will be Hadwin’s second trip to the team competition, having posted an 0-2-1 record two years ago at Liberty National when the Internationals lost to the Americans.

In making the pick, Els praised Hadwin’s complete game, saying the Canadian had few weaknesses throughout the bag.

“I love his game,” Els said in a conference call announcing the pick. “He's just very solid all around. There's not really any weakness there.”

But clearly, the International captain is hoping Hadwin’s putter will shine when his side takes on the U.S. squad in Melbourne, Australia starting Dec. 12. All four of Els’ picks are known as solid putters and he’s hoping they can not only putt well but do it in pressure situations.

“I think it’s something I’ve proven I can do over the last few years,” said Hadwin. “It certainly has been a strong point to my game.”

What he’s done with his clubs was just one reason why Els added him to the team. Clearly, the Canadian’s attitude off the course was also a key factor, especially on a squad that has the youngest average age in the event’s history and six first-time players.

“I really feel that I’ve embraced the team atmosphere of the event and I think he took note of that and my willingness to play any kind of role that he might need,” stated Hadwin.

The 32-year-old’s game also received praise from fellow Canadian Mike Weir, who will serve as one of Els’ Captain’s Assistants. Hadwin joins Weir as the only Canadian players to play on more than one International team.

“He’s shown some really solid play recently and he knows Royal Melbourne, having played a couple of World Cups down there,” said Weir, who played in five Presidents Cups.

While the news was good for Hadwin, it was not the same for another Canadian, Corey Conners, who was a strong contender for a captain’s pick.

Els said phoning to give him the news was the most difficult call he had to make but he added that the Listowel, Ont., native was gracious in accepting the news.

“Obviously quite disappointed to not have been selected as I worked very hard trying to make the team,” Conners said, “and it was a big goal for me. I feel like my game has been very consistent this year and I will keep trying to improve so I can be a part of teams in the future.”

This will be the 13th edition of the biennial competition. The Americans have won all but two of those, losing in 1988 and tying the 2003 event.

Hadwin knows it will be a tall task to topple the very deep U.S. team that is captained by Tiger Woods, who will announce his final four team members on Thursday morning.

“On the course, I think we need to use the fans to our advantage down there,” he said. “Off the course I think we just need to come together a little better than we have in previous years. That’s difficult with an international team with a lot of different personalities, a lot of different cultures, even food. It’s a lot different than what the Americans have to deal with. So if we can figure out that and come together a little better, and win that first session, I think we’ll set ourselves up for success this year.”

During the run-up to his selection, there were times when Hadwin appeared to be a lock to make the team and then others when it seemed as if he might fall just short.

He started the 2019-20 season with a runner-up finish at the Safeway Open and followed that with a tie for fourth at the Shriners Hospitals for Children Open. In both tournaments, Hadwin led the field in Greens in Regulation, a rare achievement. But during the Asian swing, Hadwin finished tied for 41st and tied for 46th in two starts while other contenders for the team, including Conners, posted strong performances. It seemed as if the Canadian would be the odd man out.

But Els, who relied in large part on analytics to make his final selections, praised Hadwin’s great putting as a significant factor in adding him to the team. The 32-year-old was 22nd in Putting Average on the PGA Tour last season, the best of any International player.