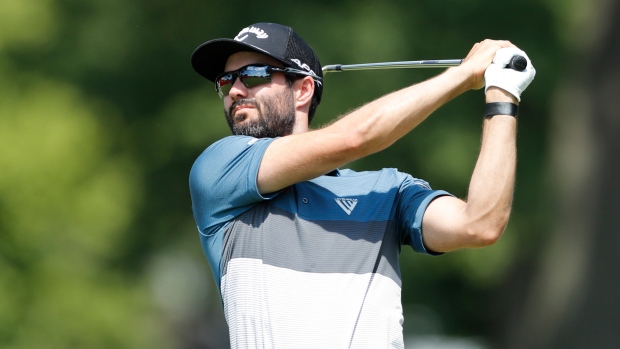 It’s hard to imagine a round of nine-under 62 is still three off a personal best, but Adam Hadwin will take it.

Hadwin made seven birdies and an eagle in the third round of the Shriners Hospital for Children Open to rocket up the leaderboard. The Abbotsford, B.C.-product went from making the cut on the number to leading the tournament when he tapped in on 18.

“I rolled a couple nice ones in there to start,” he said. “Got a nice little roll there in the middle of the back nine, too. Certainly a course where you can make plenty of birdies, and we'll see where it finishes at the end of the day.”

Hadwin had every part of his game working. He missed just one fairway and landed on 16 of 18 greens at TPC Summerlin in Las Vegas, Nev. Most of his approaches were close, with five of his birdies coming shots that landed inside six feet.

He also reached the green on the 560-yard par-5 16th hole in two and drained 22-foot putt for eagle.

“Typically these desert courses, whoever putts the best is going to win, and I was able to do that today,” stated Hadwin.

He shot his round of 59 at the Career Builder Challenge at La Quinta Country Club in La Quinta, Calif., in 2017, also a desert course known for low scores.

Now he will try for another low one on Sunday to see if he can earn his second PGA Tour title.

“Nice little Saturday moving day,” he stated, “and hopefully have a chance tomorrow.”

In recent months, Hadwin has been frustrated by his inability to get into contention. He’s had just one top-10 finish since last October although he’s only missed two cuts in that same span.

This week, his family is traveling with him for the first time. Wife Jessica has brought their daughter Maddox, born in January, to watch her father play. It appears to have brought some good luck to his game.