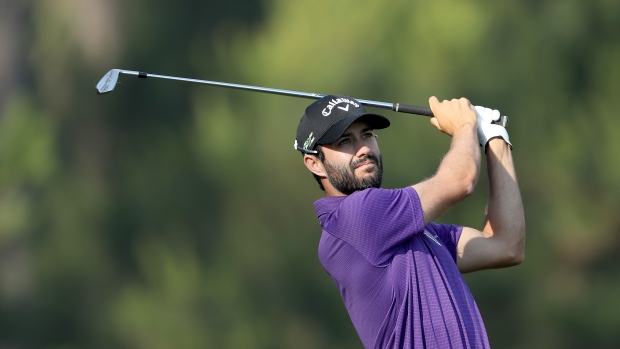 After three mediocre rounds to start the Shriners Hospital for Children Open, Adam Hadwin finally got his game clicking on Sunday, posting a sizzling bogey-free 63.

So how good was it?

“Today was about a pure as it gets,” gushed the Canadian to reporters after walking off the 18th at TPC Summerlin in Las Vegas, Nev.

The round equalled the lowest of the day and pushed the Canadian into a tie for fourth, his second straight top-five finish. But perhaps more important, it also goosed his chances of becoming a captain’s pick for the International Team for the Presidents Cup. Ernie Els will add four golfers to his squad on Nov. 4 and Hadwin would dearly like to be one of those.

The Abbotsford, B.C., product continued the tremendous ball-striking he’s exhibited this year, missing just one fairway and landing on 15 of the 18 greens. The difference, he said, was seeing the ball fly on the intended line, something that has evaded Hadwin from time to time over his career. With a hot putter that rolled in more than 111 feet of putts, the whole package was quite tidy.

“Some of the best I’ve hit it in years now,” he stated, “so to put two good weeks back to back, made some nice putts today. Basically hit almost every line off the tee and into the green.”

The solid back-to-back weeks have earned Hadwin $719,000 and 300 FedEx Cup points, both about a third of what he collected all of last season. It also moved him to 45th in the Official World Golf Ranking and makes him eligible for the World Golf Championships-HSBC Champions event in Shanghai, China. Adding that lucrative, no-cut tournament means he’ll likely pass on a previously planned stop in South Korea and play next in Japan starting Oct. 24.

It gives Hadwin two more events in which to stake his claim to a second Presidents Cup, something that’s been on his radar basically since the last one ended in New Jersey two years ago.

“That was definitely the goal to start the year,” he stated. “I wanted to make a good impression anyway, and, hey, I’m here, Ernie.”

Els is expected to name Jason Day with one of his four selections, and it’s thought that Chilean golfer Joaquin Niemann, who won the season’s first event at The Greenbrier, will also get a nod. That leaves two spots open.

Aside from Day, Hadwin is the highest ranked International-eligible player not already on the team. South Korean golfers Sungjae Im and Ben An, Jazz Janewattananond of Thailand, and South African golfers Justin Harding and Erik Van Rooyen are all thought to be in the running, as is Canada’s Corey Conners. He played the first two stops on the new calendar finishing in a tie for 13th at the Safeway Open. Conners didn’t play in Las Vegas and isn’t listed in the field for this week’s stop in Houston.

There are still numerous starts on different tours around the world before Els will round out his squad. No doubt he’ll also hear from Mike Weir, one of his assistant captains, who has said he’ll lobby for any Canadian in the running.

Hadwin knows that while there are only a few weeks left until the team is announced, there is still plenty of time for any golfer to make his case.

“It's nice to start the year here with two good events,” he stated. “Obviously we still got three or four weeks until he has to make a decision, but I feel like I’ve put myself in good spot right now.”

Even if he doesn’t end up being a selection to this team, Hadwin’s play means he’s a good bet for another squad – Canada’s Olympic team that will head to Tokyo, Japan in July.

It’s going to be a busy year for Hadwin and if he continues to play as he has in the early going, likely a very successful one too.