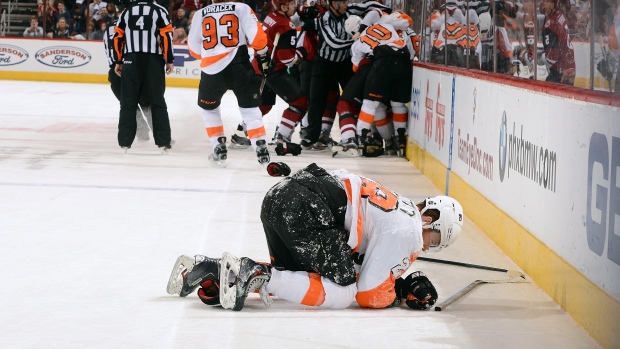 PHILADELPHIA — Less than 48 hours after cameras appeared to capture him unconscious on the ice after his head bounced off the boards, Flyers captain Claude Giroux said he will be in the lineup against the Winnipeg Jets on Monday night.

Giroux did not participate in the Flyers’ optional morning skate.

“I think there wasn’t even a question of me playing tonight or not,” Giroux said. “I feel fine. It wasn’t a fun incident, but I’m lucky that I felt pretty good. I was a little shaken up. But I think I gained the rest and I feel pretty good. I wanted to finish the game, but it was safe to make sure I got off there.”

Giroux was pushed from behind by Martin Hanzal with 2:15 remaining in the Flyers’ 2-1 loss in Arizona on Saturday night. His head awkwardly hit the boards and Hanzal hinted that it was a retaliatory hit for a Radko Gudas elbow which woozied Coyotes captain Shane Doan and knocked him out of the game earlier in the period.

Cameras captured Giroux's eyes closed as he laid on the ice, apparently unconscious. Giroux told reporters on Saturday that he was examined by a doctor post-game.

When asked if he lost consciousness, Giroux did not directly answer the question.

“Uh, I was fine,” Giroux said. “I was a little shaken up. But Jimmy (McCrossin, the Flyers’ director of sports medicine) did a good job to make sure I got off there and make sure I’m OK.”

According to the American Academy of Neurology, any loss of consciousness for any length of time is considered an automatic Grade III concussion, the most severe on the scale.

On Monday, Giroux linked his three-game absence last month (February 20-25) to a concussion for the first time.

Flyers coach Dave Hakstol said he was relieved to see Giroux was ready to play. Giroux leads the Flyers in scoring with 62 points in 71 games; his team is trying to keep pace with the Detroit Red Wings for the final Eastern Conference playoff spot in the penultimate week of the regular season.

“You want to have your best players available,” Hakstol said. “It’s nice to know he’s good to go.”

Giroux said the decision to play was a group decision between himself and the team’s medical staff. He said a conversation with current Flyers assistant coach Ian Laperriere, a former teammate who missed an entire season due to post-concussion syndrome, did give him pause.

Ottawa Senators forward Clarke MacArthur divulged in a Sunday story in the Ottawa Citizen that he attempted to hide his injury from the team’s medical staff in order to keep playing. He hasn’t played since the fourth game of the regular season - and was officially ruled out for the remainder of the year on Monday.

“It’s really something that you have to think of,” Giroux said. “Obviously, your health is the most important thing. Having ‘Lappy’ as a coach, he talks to me a lot about it. When I had my concussion, he was helping me a lot. It’s good to talk to other players like that.”