Does Lundqvist have enough in the tank to help another team?

To say the New York Rangers made a difficult organizational decision this week would be quite an understatement.

The team – ripe with goaltending prospects and eager to create cap flexibility – decided to buy out the remainder of goaltender Henrik Lundqvist’s contract, signalling the end for the King on Broadway.

The Rangers weren’t expecting a Hall of Fame career from the Swedish netminder. Taken 205th overall in the 2000 NHL Draft, Lundqvist would go on to play more than 1,000 games for the Blueshirts and be recognized annually as one of the league’s most indomitable goaltenders.

Though he would rack up considerable hardware over his 15-season career in New York (highlighted by his Vezina Trophy in 2012), Lundqvist was unable to find his way to the Stanley Cup.

We assume the elusiveness of a championship will incentivize the 38-year-old Swede to consider a short-term deal with a real contender this summer. Lundqvist is the ultimate competitor, and even with eroding performance over time, he is still a very serviceable option in net.

While the Rangers appear to have one of the brightest futures in the league, that’s a rather recent development. For long stretches of Lundqvist’s career, it felt like he was carrying an average roster to great heights. The team qualified for every postseason except one from 2005-06 to 2016-17, mostly because they had a goaltending advantage against almost every opponent in the league.

Lundqvist is also one of the best test cases we have for the importance of using more advanced statistical measures to quantify a player’s contributions.

I often point to former Detroit Red Wings star Pavel Datsyuk or Boston Bruins centre Patrice Bergeron as the two earliest examples of players we have better defined through modern NHL data. Datsyuk and Bergeron were always great offensive players, but they were also two of the best defensive forwards in recent history, and quantifying that gave us stronger understanding of their immense value.

That’s true for goaltenders, too. For many years, we used raw save percentage for directional understanding of a goaltender’s contributions to team defensive performance. But save percentage is a statistic that’s heavily impacted by team play and doesn’t take into account the quality of shots faced.

While Lundqvist’s save percentage has always been fantastic, it grossly understates just how many goals he stole from the opposition over the years.

- Goals Saved Above Average (“GSAA”): Measures how many goals were saved/lost relative to a league average goaltender by save percentage in a given season.

- Goals Saved Above Expected (“GSAx”): Measures how many goals saved above/below what was expected based on the shot quality faced. 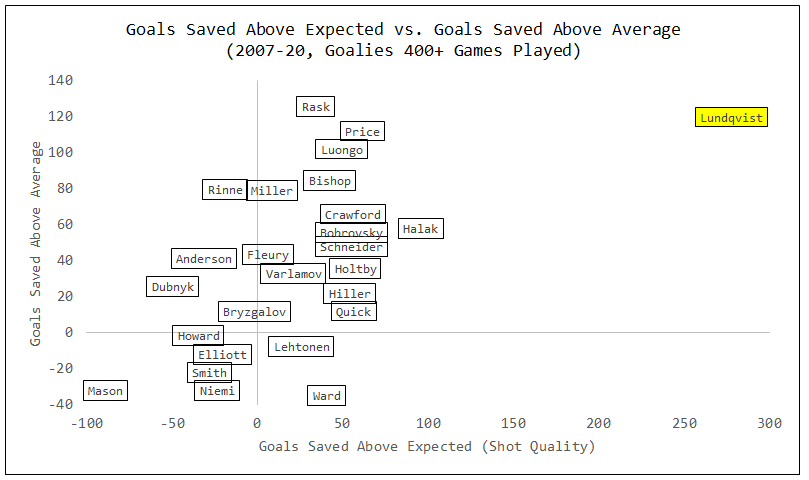 When it comes to unadjusted stop rates, Lundqvist has been as good as anyone not named Tuukka Rask. By carrying a career 91.8 per cent save percentage from 2007-20, Lundqvist was 120 goals better than his peers – a ridiculous measure by any standards.

But this is where adjustments matter. Lundqvist never played behind the Boston defence. Heck, he didn’t even get to play behind the defence that Montreal deployed in front of Carey Price, or Vancouver in front of Roberto Luongo. Despite playing roughly the same amount of games, Lundqvist was able to erase a whopping 278 goals from the ledger over his 15-year career. The next closest? Boston’s Jaroslav Halak, who has been 95 goals better than expectations, known best for perhaps the single greatest goaltending performance this century.

One of my favourite examples of the unique workload Lundqvist faced is the 2009-10 season, where Lundqvist finished sixth in Vezina Trophy voting – almost certainly because the Rangers just missed qualifying for the postseason. It wasn’t because of their goaltender, who faced one of the most burdensome shot profiles we have ever seen (via HockeyViz): 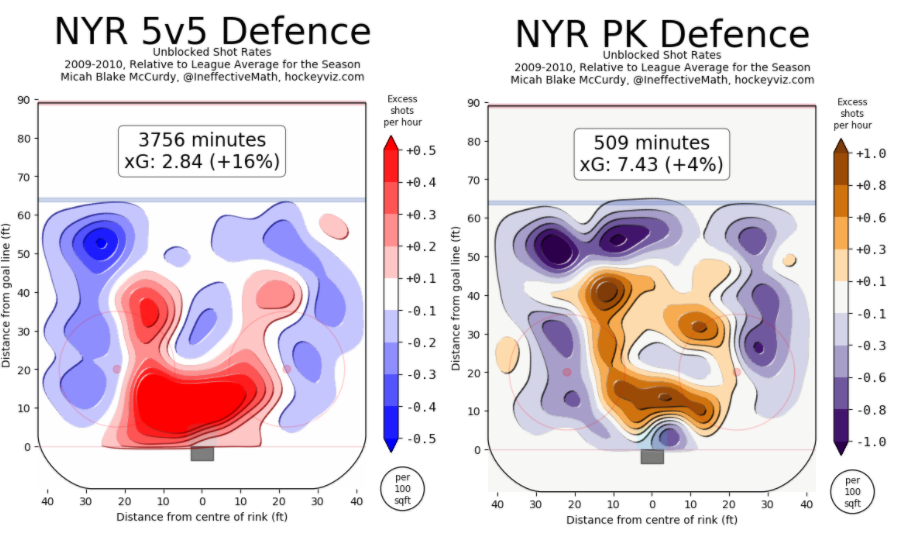 The Rangers gave up 4,402 shot attempts that season – the highest number in the league. By plotting those shots out, we know the lion’s share of those attempts at even strength or on the penalty kill were on Lundqvist’s doorstep, the area of the ice where shooting percentages consistently sit in the double digits. Lundqvist still managed to post a 92.1 save percentage and erase a whopping 53 goals, relative to expectations.

There is no doubting that Lundqvist is one of the best to ever do it. The team accomplishments never manifested, but that said a lot more about the state of the Rangers during his tenure than it did about Lundqvist’s play. The Rangers will now turn to the highly capable Alexandar Georgiev and Igor Shestyorkin to own the crease going forward.

As for Lundqvist? It is already a Hall of Fame career. The only thing needed to ice that cake is hoisting the Stanley Cup. We will get to see this fall if Lundqvist is interested in the chase, and if so, which of the Cup contenders are ready to bring in the veteran goalie.