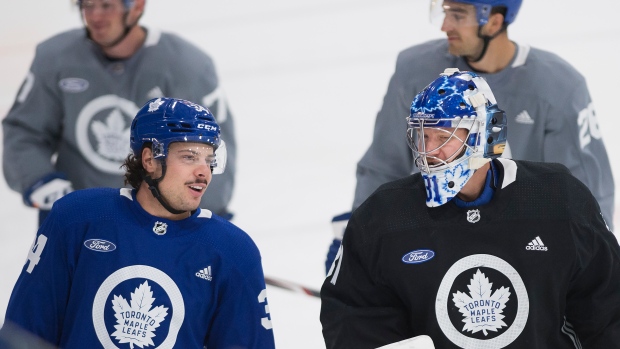 TORONTO — The undermanned Maple Leafs got both Auston Matthews (wrist) and Frederik Andersen (lower body) back at practice on Sunday in Edmonton, a positive sign they could return from injury during Toronto’s current five-game road trip.

But the Leafs also showed in Saturday’s dominant 4-0 win over the Oilers that even without those players in the lineup, they can still find ways to win. And that remains the expectation ahead of Monday’s second of three meetings with Edmonton this week, for which Matthews and Andersen are still game-time decisions.

“We're being real here: We had a great game, and it was good, but the puck is going to drop again tomorrow night,” said head coach Sheldon Keefe on a Zoom call following Sunday’s practice. “The scoreboard is going to be back to zeros and you've got to be able to do it again. We didn't come here just to get one win, so we've got to continue to refocus and get better as we get through this road trip.”

Matthews was sidelined for Saturday’s contest after re-aggravating a hand injury that forced him out of Toronto’s previous meeting against Edmonton on Jan. 22. He was limited in Sunday’s practice and did not skate on a regular line or participate in all the reps, but Keefe would not rule him out as a possibility for Monday.

Andersen hasn’t played for Toronto in nearly a week, missing their last three games with a lower-body problem that surfaced following the Leafs’ 5-2 victory over Montreal on Feb. 20. Michael Hutchinson stepped in for two tilts against Calgary last week, going 1-1-0, and then Jack Campbell returned from his own lower-body injury to backstop Toronto to its first shutout of the season in Saturday’s win.

Campbell was also absent from Sunday’s practice, something Keefe chalked up to managing the goaltender post-injury. But Campbell did look a little shaken up following a collision late in Saturday’s game with Oilers’ forward Tyler Ennis, and Keefe was not prepared on Sunday to name a starter for Monday.

“Between Campbell and Fred and their situations, we've got a lot of things to sort through here that I don't suspect will get sorted out until tomorrow,” Keefe said. “It's not looking [like Andersen will be available] if we're being honest, but with his injury, basically where we're at here now is just waiting for him to be comfortable. Today, he was on the ice for the better part of an hour, and took lots of shots, so we're essentially just waiting for him to feel comfortable.”

However the Leafs’ lineup pans out, they’re anticipating a serious pushback from Edmonton’s top players. Connor McDavid was held to one shot on goal and finished minus-three in Saturday’s loss, and Leon Draisaitl was also held at bay with three shots on goal.

It helped that for just the second time all season, Toronto didn’t take a single penalty in the game, giving the Oilers no opportunity to run wild with the extra man. And the Leafs managed to score on their lone power play opportunity, breaking out of their recent 0-for-11 funk.

The Leafs also got top performances from their best players, with both John Tavares and Mitch Marner producing two-point nights and William Nylander scoring his third goal in two games.  Having collected 32 points to date, Marner now sits just two points behind Draisaitl for third-most in the NHL. Despite being off the score sheet on Saturday, McDavid still paces all skaters with 40 points this season, and Keefe is sure Edmonton’s captain will be looking for more come Monday.

“I think we have to continue to have that level of commitment defensively when the puck changes hands,” Keefe said of shutting down the Oilers’ best. “I think we did our part yesterday, but sometimes your best players are going to have an off night. Those guys have had a lot of nights where they've been on and you've got to manage that as best you can as a team. We're expecting them to be more like themselves tomorrow, and we've got to be prepared to be even better.”

Learning to adapt on the fly has become a big part of this season for the Leafs, especially in navigating all their recent injuries. Along with Campbell, Andersen and Matthews all dealing with issues, Joe Thornton, Jake Muzzin and Zach Hyman have all missed time in the last week and Wayne Simmonds remains out with a broken wrist.

On some occasions - like Saturday’s win over the second place team in the North Division - Toronto has stepped up and proven its mettle in the face of those hardships. At other times - like last week’s 3-0 loss to Calgary - the Leafs admitted to poorly handling adversity. Keefe believes his group is more suited to being the former though.

“I think [winning without Matthews and Andersen] certainly should do a lot for us, and I think some of that confidence was earned even earlier in the season,” Keefe claimed. “It wasn't the first time we've played without Auston and not the first time we played against the Oilers without Auston. We know that Edmonton's going to have that push and there's certainly things that we can continue to do better throughout the game and we talked about some of those things here before practice, and then got on the ice and and worked at them.”​