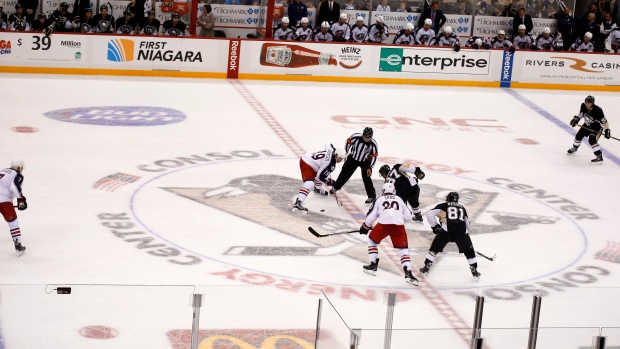 With an expansion update chewing up only 10 or 15 minutes of the NHL's four-hour Board of Governors meeting on Tuesday, there was plenty of time for other business.

Hockey operations executive Colin Campbell provided the league's 30 governors with the latest statistics on 3-on-3 overtime.

Commissioner Gary Bettman relayed Campbell's notes to the media: of the 44 preseason games sent to overtime with a tied score, 33 games (75 per cent) produced a goal via 3-on-3 play. Bettman said the average was "pretty much what we expected." Detroit GM Ken Holland said in June the league targeted a 70 per cent success rate as a benchmark.

More interesting was the average time it took to produce a goal: 2:49.

Even though 3-on-3 was implemented with the idea of ending more games, was there any concern amongst the governors that they were ending too fast?

"Not at all," Bettman said. "I think people are pleased with the early returns. But we'll see how it unfolds in the regular season and what coaching strategies are employed to effectuate or deal with it, depending on how you want to play it."

So far, strategies and player deployment have been all over the map. Teams have used three forwards, two defencemen and one forward, and two forwards and one defencemen all in the same five-minute overtime.

We even saw the first penalty shot goal produced by 3-on-3, with the Rangers' Keith Yandle beating Philadelphia's Steve Mason on Monday night at Madison Square Garden.

Bettman said he anticipates the 3-on-3 overtime rule change to be a permanent fixture.

"If it works the way we anticipate it will, I don't believe it's an experiment," Bettman said. "The AHL experimented with it last year. It looks like we're going to get, at least from the preseason, the same types of results they had."

COACH'S CHALLENGE: Bettman said the NHL is "not having difficulties" installing a video replay system in all 30 arenas that will allow the new coach's challenge to be implemented this season, despite the fact it is not up and running yet.

The coach's challenge is the one new facet of the game yet to be tested in the preseason. Each building requires a significant amount of wiring, hardware and software to install video monitors in the press box, timekeeper's box and both the home and visiting locker rooms so that all four monitors will have access to every camera feed in the building. The system also requires real-time access to the feeds so a video coach in the locker room may alert the head coach in the event a goal scored can be challenged.

For the first time, coaches will be able to challenge goal calls on the ice, but only for goaltender interference or if he believes the scoring play entered the zone offside.

"It's not ready for the preseason," Bettman said of the system. "But it will be ready for next week."

PROJECTING THE DOLLAR: The board also listened to a presentation by CIBC bank's chief economist, Avery Schenfeld, on the fluctuating Canadian dollar.

"One of the things he said that's notable," Bettman said, "is when people come to predict the dollar, they make weathermen look good."

Bettman said the dollar is "not something people (at the NHL) are concerned about on a daily basis," though if an outside presenter was invited, it stands to reason at least a few people on the board must be concerned.

"It's the reality that we live with," Bettman said. "In my two decades-plus of doing this, I've seen the Canadian dollar lower (than it is now) and I've seen it above par. It's something we deal with and something we take account for."

The NHL reviewed 2015-16 revenue projections during the Board of Governors meeting, but Bettman would not give a public projection yet.

"We'll be over $4 billion, but at this stage, I'm not comfortable giving a public endorsement to a particular number," Bettman said. "Revenues are continuing to grow, even with the Canadian dollar soft."