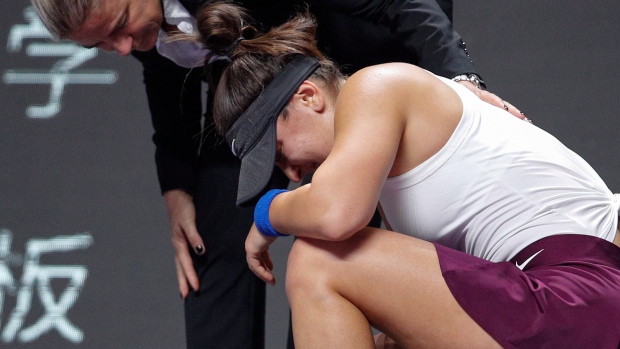 Bianca Andreescu is doubtful to play in the French Open, which starts Sept. 27, due to a foot injury.

"She's doing better," said coach Sylvain Bruneau. "It's a step-by-step approach. We're trying to be very smart and careful with it and it’s getting there. I think it's going to be too tight for the clay-court season although the decision has not been made."

Andreescu suffered a stress fracture in her foot as a junior player and it seems like this latest injury may be similar although Bruneau didn't want to go into specifics.

"It's something that's been recurring and I think we're dealing with it now the right way so time will tell and hopefully it's not going to happen again,"  said Bruneau, who guided Andreescu to titles at Indian Wells, Toronto and the US Open last year. "We've been focusing right now on the fitness part and she's really, really in good shape."

Bruneau added that Andreescu has also done some light hitting.

Andreescu, who turned 20 in June, has been forced to deal with a string of injuries already in her young career. A shoulder issue forced the Mississauga, Ont., native to miss all but one match in the clay and grass seasons last year and then a knee injury sustained in October kept her sidelined through the start of 2020. Andreescu was nearing a return when the tour was suspended due to the COVID-19 pandemic in March.

"Very frustrating, for sure," admitted Bruneau, "but she's in a good place, she's in a very good place right now. She's working really hard on what she can do and she's mentally in a good place after struggling with not being in New York ... she's a positive girl by nature and she's got some good people around her. We'll try to put things in perspective."

The foot injury prevented Andreescu, currently No. 6 in the world, from defending her title at the US Open.

The calendar after Roland Garros is unclear at this point, but Bruneau is hopeful that Andreescu will get back into competition in 2020.

"We're open-minded after the clay-court season," he said. "I've heard a lot of options and a lot of discussions about what's going on, so the calendar will be pushed and there will be tournaments later on in the year that we're definitely going to be considering. I mean, last time she played was last year so that’s a long stretch without competing. Personally, I would prefer that before the Australian Open [in January 2021] she's able to get a few tournaments in if she can so we'll see what they come up with."

Andreescu proved last year that she can emerge from a long layoff and have success. She didn't play a tune-up event prior to her magical run in Toronto.

"She's very unique and special in that way," said Heidi El Tabakh, Canada's Fed Cup captain. "She really believes in herself. It's definitely going to be a disadvantage going into a slam if she doesn't play a warm-up, she's not really match tough, but knowing her, she’s a champion and I think she'll be just fine."