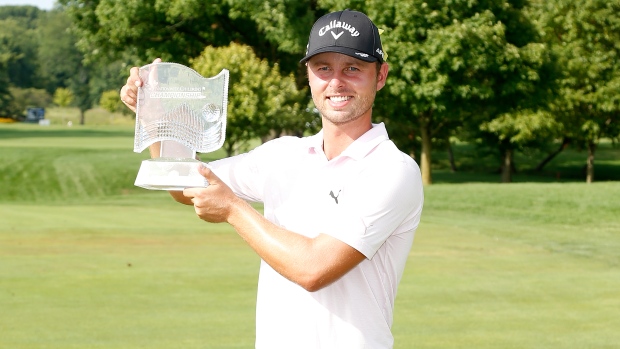 If this is the end of Adam Svensson’s time on the Korn Ferry Tour, he’s going out in style. In the tour’s penultimate event in what has been a long and drawn out season, the Surrey, B.C., product logged a four-under 67 that was good enough for a two-shot victory at the Nationwide Children’s Hospital Championship.

It was his second win of the campaign and although he already had his PGA Tour status locked up for next year, it put him in position to finish first overall at next week’s final tournament, the Korn Ferry Tour Championship.

“I’m pretty pumped,” said Svensson about moving up to next season’s PGA Tour. “It’s been two years on the Korn Ferry Tour. It’s been great but I’m ready to take my game to the next level and get out there and play.”

The victory pushed him to third in the standings. The higher a golfer finishes on the Korn Ferry points list, the better his priority status on next year’s PGA Tour. There is also one very large prize awaiting. The player who finishes first overall gets a full exemption and that is now the goal for Svensson in what he hopes might be his last start on the triple A circuit.

Svensson jumped off to a fast start with birdies on the second, third and fourth holes. He added two more on seven and nine for a front-nine 31.

But on the back, his torrid pace slowed and a bogey on 13 dropped his lead to one over Stephan Jaeger. But he drew on his previous victory this year and when he started to lose steam, he tried to keep his pace smooth and even.

“I just said to myself, if I par in, I have a good chance,” he stated. “If he does birdie, go to a playoff or something like that. But I knew they were tough holes, so I just had to make pars and just get in.”

It’s been a long and drawn out campaign for Korn Ferry Tour golfers. Due to the pandemic the 2020 and 2021 seasons were combined into a super schedule. Svensson will play his 40th tournament next week.

It will be the second spin on the PGA Tour for the 27-year-old from Surrey, B.C. He played the top circuit in 2019, but missed the cut in 14 of 25 starts with his best finish a tie for 15th. He finished 167th on the FedEx Cup standings and was relegated back to the Korn Ferry Tour where he has played for the elongated 2020-2021 campaign.

This time around, he’s better prepared for playing the PGA Tour.

“I’m a lot more mature,” said Svensson. “I do things correctly now. I give it 100 per cent, practicing more. I would say maturing as a player and just that mentality change is going to benefit me.”

He added that his putting and chipping has improved significantly in the last two year and that’s given him more confidence.

“You know, nothing’s certain but on paper, looks like I’m playing pretty good,” Svensson said of playing up a level next season, “so if I just keep doing that, we’ll see where it goes.”

Svensson will be joined on next year’s PGA Tour by Taylor Pendrith, who also earned enough points during the season to guarantee his spot.

Another 25 exemptions are up for grabs for players outside the top 25 on the Korn Ferry Tour’s regular season and those from the PGA Tour who ended up 126-200 on the PGA Tour’s FedEx Cup. Michael Gligic, who came out of the latter group, and Stuart Macdonald, who in the former, both have chances to get on the PGA Tour at the final stop of the three-event playoffs, the Korn Ferry Tour Championship. Gligic sits in 20th spot while Macdonald is 30th. The top 25 in that group will advance.