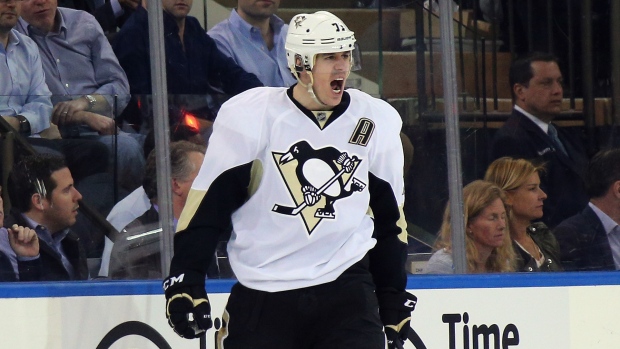 TAMPA, Fla. — Tuesday will mark 22 years to the day that Mark Messier predicted his New York Rangers would force a Game 7 against the New Jersey Devils in the Eastern Conference final.

It became known as “The Guarantee,” a bold choice of words rarely replicated since May 24, 1994.

The next day, Messier was splashed on the back pages of the New York Post and New York Daily News with headlines of “We’ll Win Tonight” and “Mess Sez We’ll Win.”

Sports writers have been longing in the two decades since to write the next “guarantee.”

On Monday, Penguins forward Evgeni Malkin was billed as making such a claim, even though he didn’t nearly go as far out on the ledge as Messier.

“I believe my team. I believe myself,” Malkin told reporters before boarding the Penguins’ flight to Tampa Bay, as transcribed by the NHL. “And we can get it back at Pittsburgh for sure.”

Same round. Same deficit. But not the same thing.

Malkin came across as confident, or maybe even defiant, but it certainly did not sound like a guarantee. It should also be pointed out that unlike Messier, English is Malkin’s second language.

Tampa Bay Lightning coach Jon Cooper laughed it off on Monday when told that Malkin “guaranteed” a victory in Game 6 to send the series back to the Steel City.

“What's he supposed to say in that situation? ‘We’re done? We're just going down as a formality?’” Cooper asked. “Of course they're going to say they're going to win, and they should. They're a good team, a good, confident group. But we feel the same way.

“Look, you've got to win four, and we're a little closer to four than they are, but you've still got to get four, and that's all our group is thinking about is let's just get that fourth one.”

Cooper is confident because the Lightning were in this exact position last year against the Rangers, holding a 3-2 lead in the Eastern Conference final, before they were pumped in Game 6. He said the Lightning know how to respond now.

“You can’t sit here and dictate or guarantee what the result’s going to be, but our mindset going into the game has to be a heck of a lot different,” Cooper said. “We had our tails between our legs and went back for Game 7 and really had to regroup to pull that one out. That has to be the way we are this time.”

In the same breath, Malkin has been with the Penguins long enough to draw on the experience of the 2009 Stanley Cup final, when Pittsburgh rallied back from a 3-2 deficit to win two straight to take the Cup in Detroit.

The only difference was there was no “guarantee” then.