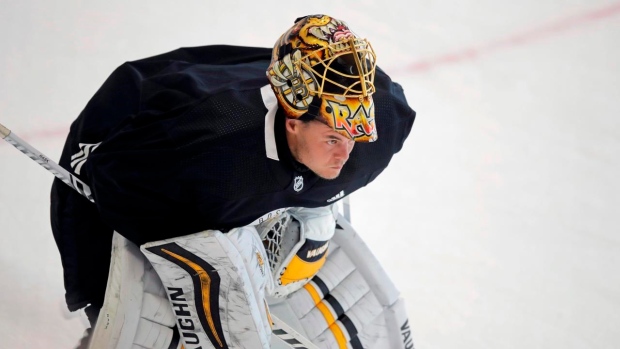 Boston Bruins players and coaches learned that Tuukka Rask was opting out of the Stanley Cup playoffs and returning home for family reasons only a few hours before Game 3 of their series against the Carolina Hurricanes.

"We found out shortly before departure of the bus," said captain Zdeno Chara. "Obviously, our first concern is the health and safety of his family, that’s the most important thing we're all kind of thinking about and we support Tuukka's decision. There's nothing more important than your family."

"It is a bit of a shocker at first," admitted head coach Bruce Cassidy. "You know, it's your starting goaltender that's a terrific goaltender."

The absence of Rask, who helped the team reach Game 7 of the Stanley Cup Final last year and was nominated for the Vezina Trophy this season, didn't faze the veteran Bruins, who beat the Hurricanes 3-1 to seize a 2-1 lead in the series. Jaroslav Halak made 29 saves.

"The message, 'We're not going to change the way we play no matter who's in net,'" said Cassidy. "We've proven that with Jaro here for the last two years. We know he's a capable goaltender ... It wasn't going to be the end of the world to have Jaro in there. I mean, we wish Tuukka well with his family, but we're here to take care of business."

While the news was jarring, it wasn't entirely unexpected. Rask was candid in a media session following Game 2 on Thursday night when he called the atmosphere without fans "dull" and compared it to an exhibition game. And Bruins management knew Rask, a father of three girls including a newborn, had reservations about leaving home.

"He had been trying to battle through it," said general manager Don Sweeney. "During the course of the time up here it's been increasingly more and more difficult for Tuukka to mentally stay where he needs to be and ultimately he made the decision that he felt he had to be in a different place ... I think we all understand that these are trying times for everybody."

"I don’t judge anyone that's making that decision," said Patrice Bergeron, who also has three kids at home. "It's not easy. Thank God for technology and FaceTime and having the support of your teammates, that goes a long way."

Cassidy had a couple conversations with Rask during training camp about his situation and mindset.

"He made the decision to come so I assumed everything was good at home, but you know deep down that there may be a possibility [he leaves]. But you can’t dwell on that," Cassidy said. "We have a team to get ready. I know it sounds cold, but the professional part of it is we have to get a team ready to play for the Stanley Cup and then still be there for Tuukka for whatever he needs."

Sweeney said the team looks forward to having Rask back for next season.

#NHLBruins GM Don Sweeney announces that Tuukka Rask has opted out of the NHL's Return to Play to return home and be with his family and explains that he wasn't entirely caught off guard by the decision and the team fully supports him: https://t.co/b9NurOS35M#TSNHockey pic.twitter.com/3ueLwfv260

Halak hasn't been the starter for a playoff team since 2015 when he posted a .926 save percentage with the Islanders in a seven-game loss to the Washington Capitals.

"He's a proven goalie," observed Chara, a fellow Slovak who has played with Halak at international events. "He's shown a number of times that he can handle these situations."

"Jaro is a popular guy and they know his abilities," said Cassidy. "Now, it could be his turn to have a nice run. Maybe this is Jaro's year.​"​

Halak authored a magical run in the playoffs back in 2010 when he helped the underdog Montreal Canadiens reach the Eastern Conference final. Overall, he has a sparkling .923 save percentage in 32 NHL playoff appearances. Halak also posted a .941 save percentage in helping Team Europe reach the final at the 2016 World Cup, which was played in Toronto.

Halak said he had no idea the Rask decision was coming, but the 35-year-old was sharp early in the first period as the Hurricanes outshot the Bruins 15-7. It was his first game since Aug. 2.

"It's really hot out there," Halak observed, "having those shots in the beginning helped me get into the game, but at the same time it's just really humid. We're all in the same situation so no complaints. We found a way today, that's the bottom line."

The only hiccup for Halak came in the third period when he gifted a goal to Nino Niederreiter with a brutal giveaway. The goal brought the Hurricanes, who had been scuffling, within one goal at 2-1.

"Right away on the bench Brad Marchand stands up, 'Hey, that's not going to hurt us. We're fine. We're playing well,'" said Cassidy. "And the whole bench was like that. There was no collective letdown. We knew we were playing our game from the second period on. The first period we bent, but didn't break."

Boston was playing a second straight game without leading goal scorer David Pastrnak, who watched from the stands. The Bruins haven't scored a five-on-five goal with the top-line winger out of the lineup and Anders Bjork, who was whistled for three penalties on Saturday, failed to make an impact while skating alongside Bergeron and Marchand.

But, as Halak noted, Boston continues to find a way.

"We had different guys stepping up today," said Chara. "It's up to all of us to raise our game and be there for each other. We have to go through different adversities throughout the playoffs, that's just a part of it, and we faced [more] today."

INSTANT ANALYSIS: @jamiemclennan29 on Tuukka Rask’s decision to be with his family and the #NHLBruins going forward in the #StanleyCup playoffs with Jaroslav Halak - https://t.co/Gq4Uk6RyMO#TSNHockey pic.twitter.com/VK5vnvsePr

The Hurricanes are facing big-time adversity after Andrei Svechnikov left the game following an awkward collision with Chara in the third period. His right leg twisted underneath him and Svechnikov didn't put any weight on it as he left the ice.

"Right now, it's tough," said coach Rod Brind'Amour, "because you see a kid go down and that injury looks really bad so that's all that's going through my head. I hate it for him. You know, that's it, I can't really comment on anything else, to be honest with you."

The 20-year-old Russian had a goal and an assist in the Game 2 win over Boston and is second on the Hurricanes in playoff scoring with seven points in six games.

Svechnikov is hurting after getting tangled with Chara, gets helped off the ice #LetsGoCanes pic.twitter.com/ZgyBhm4mYK

The injury made Saturday's loss all the more painful.

"We let off the gas a little and that team's too good," said Brind’Amour. "If you give them an inch they're taking a mile and then they got their game going and we never got to our game the rest of the game. I mean, it was a miracle we were still in it toward the end."

Carolina's power play was a big problem on Saturday going 1/5 and surrendering a shorthanded goal. The one goal came on the Halak giveaway. What's wrong on the man advantage?

"Well, you wouldn't have enough time," Brind’Amour said. "We were just sluggish. We actually had a good one in the first period and hit the post. Our entries haven't been crisp enough and, again, you're facing one of the best teams for a reason and if you're not sharp it's going to look like that. The power play today kind of epitomized our game. We were just sluggish and not first to anything and not quite doing anything right so you add all those things up and it was lucky we were hanging around at the end of the game."

Alex Ovechkin was asked what happened when he missed a wide open net during a third period power play on Friday night. The Capitals captain, who scored 48 goals to tie with Pastrnak for the league lead in the regular season, mustered a weak smile.

"It was bad pass by Kuzy," Ovechkin said glancing at Evgeny Kuznetsov who stared ahead while seated at the post-game podium. "No, I just missed the net. S--t happens."

Even the greatest goal scorers miss every so often, but that was a big miss. The Capitals trailed 3-2 at the time and the stingy Islanders know how to lock things down. Sure enough, Washington couldn't apply much pressure the rest of the way falling into an 0-2 hole in the series.

"We know we all have to play better, it starts with me," said Ovechkin, who scored both Capitals goals on Friday.

"He had a strong game," coach Todd Reirden said. "We need more players like him who are playing to their top level."

The Capitals finished second in goals per game in the regular season (3.42), but have managed to put only four pucks in the net through two games against the Islanders.

"We've been in this situation," said Ovechkin referencing an 0-2 deficit the team faced in the first round of the 2018 playoffs against Columbus. "We know how to fight and how to play. I believe in this group and we all believe in each other. There's no panicking. We know our strength and what we have to do to bounce back."

The Capitals are very familiar with the tactics employed by Islanders coach Barry Trotz, who guided Washington to the Stanley Cup in 2018.

"We know the system," said Ovechkin. "We watched the video and we all know how to play against those kind of teams. We have to play better. We have plenty of skill and character in the locker room. It's not over yet."

But adjustments must be made to generate more offence.

"It starts off [with] putting the puck behind the opposition defence for a full game," Reirden said. "We've done it in both the first period of Game 1 and 2 and we're just not able to do it for 60 minutes. We lose momentum through penalties and other things. It's important we do that for 60 minutes and are able to impose our will on the opposition. If you don't do that then you'll spend a lot of time on the perimeter so, for us and how our team is built, that’s what we have to get to, putting pucks in places where our team can get in and have an effect on the forecheck and from there we can break them down, because they won't be in structure and we'll be able to get to the interior a little bit more."

"Everyone was on the ice today including Nick at the end there and we'll see how everyone's doing tomorrow morning," Reirden said.