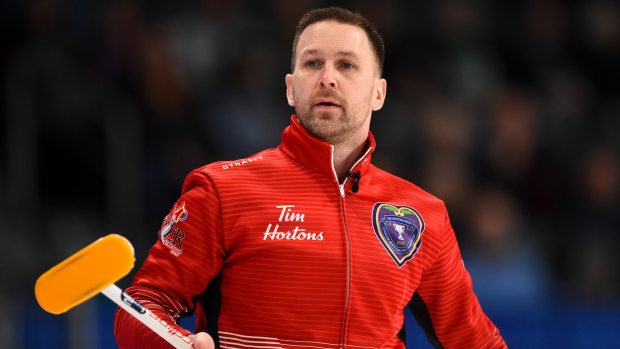 Brad Gushue has had some significant achievements over the past few weeks.

First, he skipped his Newfoundland and Labrador team to its third Tim Hortons Brier title in four years. Not long after that, he completed a major Lego project of a merry-go-round, snapping together more than 10,000 pieces.

The self-confessed Lego junkie has gone from the ice to isolation in a short period of time. One of the fallouts of that transition caused by the COVID-19 pandemic was the cancellation of the LGT World Curling Championships in Glasgow, Scotland.

“We got word right after we won the Brier that it may get cancelled,” said Gushue. “A week later [the World Curling Federation] made the announcement to at least postpone it.”

A short time after that, Gushue received news from Curling Canada that the world championship would be cancelled. That brought the curling season to an abrupt end for the Newfoundland and Labrador team that also includes Mark Nichols, Brett Gallant and Geoff Walker.

“We were all disappointed, but we understand the situation,” added Gushue. “Obviously people’s lives are far more important than playing a curling event.”

The men’s world championship was just one of a handful of global events to be cancelled. The women’s, mixed doubles and senior championships were also scratched, not to mention end-of-season events on the World Curling Tour.

The impact of that is still being felt on many levels, but for Gushue, a bigger concern may be what happens next year.

“I worry about what’s going to happen to some of the smaller, non-televised events,” he stated. “Those rely a lot on small-to-medium-sized businesses to fund the purses, those $5,000 and $10,000 sponsorships.”

There are very few curlers who make their living full-time on the pebbled sheets and for many, a drop in the number of events offering cash prizes means less opportunity to survive as a curler.

At the level below the very top teams, players might earn up to 50 per cent of their income in prize money so smaller purses or fewer events would be significant.

While that won’t affect Gushue that much, he is feeling the effects of the shutdown in other ways. He is the co-owner of three Orangetheory Fitness franchises with a fourth about to open. All of them have been shuttered and are earning zero revenue, straining the resources of the partners.

“It’s definitely a challenge,” he admitted. “We’ve been closed for a month and we’re not sure when we’ll be able to open again.”

Even when he is able to get up and running, he won’t be out of the woods. The economy in Newfoundland and Labrador was in a tough spot prior to the pandemic with the drop in oil prices, a major engine in the province.

Then there was the hit local business took in January from the ‘Snowmageddon’ storm that led to a state of emergency and a week-long shutdown of most of the province.

If that wasn’t enough, there are now fears of a food shortage. On Monday, shipping firm Oceanex Inc., which delivers as much as half the island’s food supply, said it is facing huge financial strains caused by the pandemic and may not be able to continue operating at its current level.

“It’s a pretty tough situation right now,” admitted Gushue. “The level of anxiety is quite high.

“It puts missing out on the worlds into perspective.”

The skip is trying to stay optimistic through all of this, sending a message to curling fans and all Canadians to stay at home and abide by the self-isolation instructions.

“Stay at home and turn on Netflix or Crave, enjoy the rest and we can get back to work as quick as possible.”