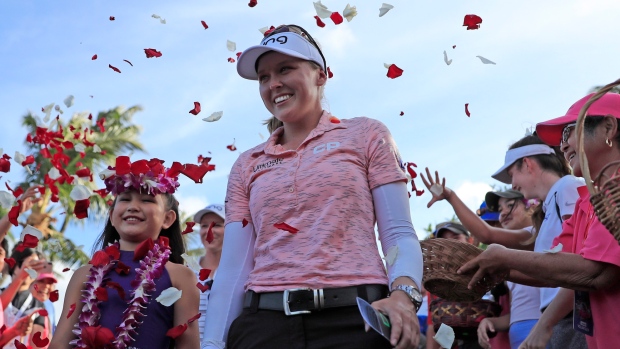 Brooke Henderson may only be 22, but she’s already become a full-fledged Canadian snowbird.

After finishing up her 2019 season in late November, the Smiths Falls, Ont., product did what many retirees from north of the 49th do when the temperatures dip and headed to Florida.

“I actually stayed right there for about a month, I guess, just really enjoyed the warm weather,” said Henderson of her winter home in Naples, Fla. “Then we went home to Canada, both my sister and I, for around two weeks, saw tons of family and friends. It was like minus 30 for a couple days when we went home, and then lots of snow. It was definitely a unique experience, but it was fun.”

Henderson spoke at a press conference this week as she gets her new season underway at the Diamond Resorts Tournament of Champions, in Lake Buena Vista, Fla. The event features a celebrity pro-am format and the Canadian golfer will be playing along baseball stars John Smoltz and Josh Donaldson in the first round.

While it’s a full LPGA Tour event, there’s also a lot of fun and laughs that help kick off the season, one in which the Canadian golfer hopes to continue her excellent play of the previous campaigns.

Although she’s won nine times in her career – twice in each of the last four years – Henderson is starting just her fifth full year on the LPGA Tour. She’s certainly accomplished a lot, but she still has her focus on more achievements.

“We were really happy with how everything went,” said Henderson of her 2019 campaign. “I felt like I improved in a lot of places, which was good. I think a key thing for me is scoring average and keeping it below 70, which I did last year. Again, this year that's another big goal. I feel like, if I can do that, I'll put myself in contention and hopefully win twice and keep my record alive since 2016, I guess, which would be really fun.”

If there was a downside to an otherwise stellar year, it was in the majors. Henderson’s best finish in the five biggest events on the calendar was 17th, which she did at both the ANA Inspiration and the Evian Championship. It was the first time in six years that she failed to post a top-10 in any major. Understandably, that’s near the top of her list of goals for this year.

There may be one victory that would top a major and that’s an Olympic medal. Henderson will represent Canada for a second time when the golf competition is held at the Tokyo Games starting July 30.

“[It] was a lot of fun for Alena [Sharp] and I to go and represent Canada,” said Henderson, of the 2016 Games. “To be with the best athletes in the world and watching them compete and train and stay in the Olympic Village with them was really cool. I think this year I'm excited for all 34 events on the LPGA Tour, and the Olympics is just another one. It will definitely be fun to go and represent Canada again.”

Henderson is once again planning a heavy schedule. Last year she teed it up in 27 tournaments, the fewest in the last four years but still seventh most on the LPGA Tour. She’ll try to fit in her very few weeks off so they allow her to rest ahead of majors.

A year older, a year more experienced and fully rested after a brief winter break in the sunshine, Henderson is ready to go in 2020.