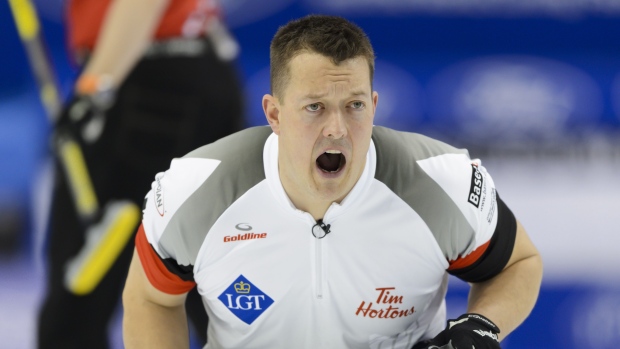 During most of last year, at the start of curling games, the best players in the world engaged in two curling traditions. One was old: the handshake. The other was new: checking out the other guy’s broom.

One was a friendly gesture, embracing the positive side of the roaring game. The other? Not so much.

It was a year of contentious, sometimes raucous, moments as broom technology superseded shot-making skills, turning important games into jokes. The new brooms allowed sweepers to guide shots – even those poorly thrown – to their intended targets as if they were on a leash. Wide, narrow, light, heavy. . . it didn’t matter thanks to the Frankenbrooms. While there was an early season agreement between the teams not to use the brooms with highly abrasive material, some chose to ignore that, setting up some tense encounters.

“There was a lot of name-calling and accusations and from some guys that you wouldn’t expect it from,” said Brad Gushue, the Olympic champion who was one of the first to figure out and take advantage of the then-legal broom technology. “There was some stuff said among some guys, that you’re probably not going to forget it.”

These brooms effectively etched score lines in the ice on which the rock would travel. Sweepers could guide stones to almost any spot on the sheet. It meant throwers could be less accurate – heck, they didn’t even have to throw the correct handle.

As well, heavy shots could be slowed by dropping snow ploughed up from the ice underneath the path.

As a result, shooting percentages in big events soared. Five skips in last year’s Tim Hortons Brier shot over 88 per cent for the week. In the past five Briers combined, only two skips posted percentages over 88.

Results became so good by elite teams that games were often decided on a single shot. During one Grand Slam contest last year, Norway’s Thomas Ulsrud was scored at a perfect 100 per cent and lost to Gushue who came in a 99 per cent.

“It’s a tough sport and that’s kind of what I love about it,” said Gushue. “Last year it became a lot easier.”

After a season of craziness, cooler heads have prevailed. In May, the World Curling Federation held a sweeping summit in Kemptville, Ont., which brought together players, manufacturers, governing bodies and research experts all hoping to come up with a solution.

“You don’t want any team having an advantage base on their equipment,” stated Ben Hebert, a Canadian, world and Olympic champion and one of those involved in the testing. “I don’t think anyone wanted that. Curling was due for something like this to happen – we didn’t have any regulations. Everybody was on board to get rid of it. It wasn’t a tough sell.”

Over four days, rocks were thrown, swept and measured by elite male and female players with more than 50 different broom heads from every major manufacturer tested.

The entire project was overseen by the National Research Council of Canada, using scientific methods and lots of high-tech measuring equipment.

After a few long days of testing, the result has been a standardization of the material used on brush heads as well as a few new rules to restrict how sweepers use the brooms.

Starting this season, all broom heads will use one material, which comes from the same source and be one colour – hello Mustard Yellow (believe it or not, colour played a part in how much effect sweepers could have on a rock. Darker colours meant more control). As well, there will be no inserts or foil allowed between the material and the head. Players can no longer change heads during a game either. It will be one brush head per contest.

Additionally, curlers can no longer exchange brooms during the game – it’s one broom for one sweeper. And, the sweeping motion may not drop anything on the path of the rock – the anti-snowploughing rule.

Oh, and just in case you were thinking of breaking out the corn brooms? Sorry, they’ve been banned along with any hair brushes although both can still be used in the delivery.

The WCF recommendations were passed at last week’s World Curling Congress in Stockholm, Sweden, and have since been adopted by Curling Canada and just about every other provincial and regional curling body (although some have small differences which may need to be tidied up). In most cases, they’re hoping for self-regulation but there are stiff provisions in place for those who break the rule: a sweeper using a non-approved broom will be suspended for the remainder of the competition and he or she cannot be replaced (meaning his or her team will play out the event as a threesome), and his or her team will also forfeit that game. A second violation means a one-year ban for the sweeper.

“I think for the circumstances we had, we came up with as good a solution as we could,” said Gushue, who was also among the curlers at the summit. “Is it perfect? Probably not, but I think it’s going to solve 99 per cent of the problems.”

One side benefit of the new rules is that you’re more than likely to see teams go back to using two sweepers on every rock.

For manufacturers, however, the news isn’t all good. While all were on board with the changes and praised the WCF for its openness in the process, some feel it possibly goes too far, especially since it won’t just affect the elite curlers, but those who play for fun.

“This new WCF approved design is not for everyone,” said Scott Taylor, head of Balance Plus. “It’s not for seniors or younger people, older people. They’re going to be out there and sweeping and they’re not going to get the results they’ve been used to the last little while for distance.”

Balance Plus had a broom head known as the EQ, which had a foil insert that helped carry rocks farther. It was developed out of the Own the Podium program and used by the Canadian teams at the Vancouver Olympics. It also proved especially beneficial for recreational curlers. But it doesn’t conform with the new standardization and as a result, it can make the game more difficult for those playing just for fun. That’s not something curling wants right now as it tries to staunch the dropping participation numbers.

One other factor could be cost. The new standardized material wears out quicker than previously used ones so the heads will need to be replaced more frequently.

There will, of course, be fine-tuning needed for the best curlers in the game too.

“There will be a few more misses and some adjustments,” stated Hebert. “ [It’s] going to benefit the better sweepers who have pressure and speed, rather than just who can put lines in the ice.”

Gushue agreed, adding that the regulations will let the best players once again be the best.

“I think on average the shooting percentages will drop by at least five per cent and maybe more,” he added. “The brushes corrected a lot of mistakes. The top guys, not so much because they were throwing it close any way. But you’ll see probably a little more separation between the top 20 teams in the world.”

In two World Curling Tour stops held in Oakville the last two weekends, the results of the new rules are already having an impact. There were enough misses to keep games interesting and no one was eyeing his or her opponent’s brooms.

“Sweeping’s not a big part of the discussion any more, which is nice,” said Taylor.