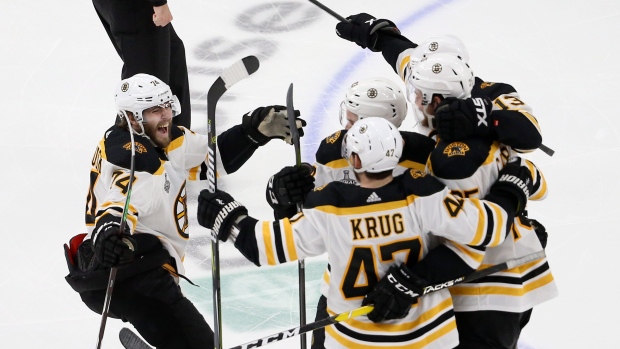 ST. LOUIS — There are five photos the Boston Bruins brought with them to the Gateway City, the same five pictures that hang in their dressing room at TD Garden.

In one placed adjacent to his stall, Tuukka Rask is taking a Stanley Cup shower, drenched in champagne.

In another nearby, Patrice Bergeron is gripping a bottle of Veuve Clicquot with the grin of a lifetime, while Brad Marchand sips from the font of Lord Stanley next to him. 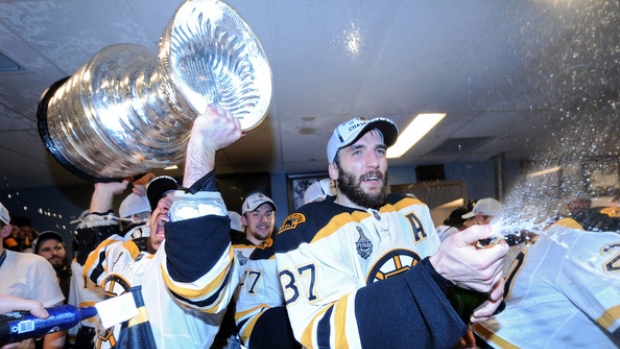 For the five veterans remaining from 2011, there is no better reminder. For the newcomers and kids along for the ride, a chance to be in indelible photos like those are the ultimate motivator to climb the mountain.

“I think every day it’s a reminder of what we’re playing for,” Bergeron said. “It’s just to remember how much it means to make it happen.”

In case they needed another one, Bergeron provided a reminder with a moving pre-game message to the Bruins on Sunday night.

Then Marchand and Rask went out and slammed Stanley’s case shut, sending the Bruins back to Boston with a chance to take more memories.

It will be Seventh Heaven in Beantown on Wednesday for the 17th time in NHL history. One game, winner take all for hockey’s ultimate prize.

Marchand quieted a revved up Blues crowd - one ready to blow off 52 years worth of steam - with an early power play goal and Rask was nearly flawless in a 28-save performance as the Bruins forced Game 7 with a 5-1 victory at Enterprise Center.

Wednesday will mark the first Game 7 in the Final since 2011, when the Bruins also turned around a 3-2 series deficit against the Vancouver Canucks.

These Bruins appear unflappable because they’ve done it before. They have five players left from a decade ago; 13 teams in the Eastern Conference have a combined six players remaining on their original team over that time span.

The next time anyone tells you experience is overrated, remind them that the last team to win the Stanley Cup without a previous winner on the roster is the 1989 Calgary Flames.

Case in point: Charlie McAvoy admitted his nerves were all over the place before Bergeron addressed the team before the game. He said “just the thought of it being over” was “terrifying.”

“Man, I'm going through this and this is my first Stanley Cup and it's just a lot,” McAvoy said. “I’ll just be honest with you. The emotions, like, crap, it's a lot. This is your dream to win this thing and when your backs are against the wall and you know they're one away, it hurts a little bit. But I got a different perspective when our guys stepped up and just talked.”

He said Bergeron calmed everyone down. When he speaks, you listen, Jake DeBrusk said.

"We are in a situation that is everyone's childhood's dream here and we must realize it," Bergeron said of his speech​.

“It was exactly what we needed,” McAvoy explained. “We were all a little kid once and we all wanted this bad. And I think it was just an element of savouring this moment and not letting it end tonight.”

Rask wouldn’t let it. After a rather average Final round, he saved his best for when the Bruins' backs were against the wall. He staved off an early St. Louis onslaught, while the Blues mauled the Bruins on the forecheck early. He was a perfect 12-for-12 on shorthanded shots faced as the Bruins killed off four opportunities - despite the Blues’ lethargic power play looking as threatening as it has at any point in the series.

Rask improved his save percentage to a staggering .973 in five elimination games this spring. The Bruins are a perfect 5-0, winning three times to save their own season (twice against Toronto) and twice to knock out Columbus and Carolina.

He may win the Conn Smythe Trophy no matter what happens on Wednesday.

“He was the best player on the ice tonight,” McAvoy said. “He's our best player, he has been all playoffs and all regular season. We know that when he plays like that, to the best of his ability, and when we do our jobs in front of him … he's going to be there. He's going to be in that zone.”

In my case I shall stay.

The Blues didn’t seem rattled with the Game 6 loss, or shaken that they squandered the opportunity to see St. Louis explode. After 52 years, what's three more days?

Maybe, just maybe, the Blues have the Bruins exactly where they want them. St. Louis is 9-3 on the road this spring and Jordan Binnington’s bounce back numbers are verging on the stuff of legend (12-2 this season with a .937 save percentage).

“Listen, if you told me four months ago we were going to be in the Finals in Game 7, I think I’d take it,” coach Craig Berube said. “We’ve been a good road team. We've won twice up there in this series, so we're a confident group.”

“We’re going to have to live a bit what St. Louis did today and have to deal with now you’re going home, the Stanley Cup’s in the building, someone’s winning it,” Cassidy said. “There is a danger there and I think that’s what [the veterans bring]. These guys have been there and are able to get that message out.”

The message is simple. As Fred Shero said, win one and walk together forever - in photographs and on the Stanley Cup.