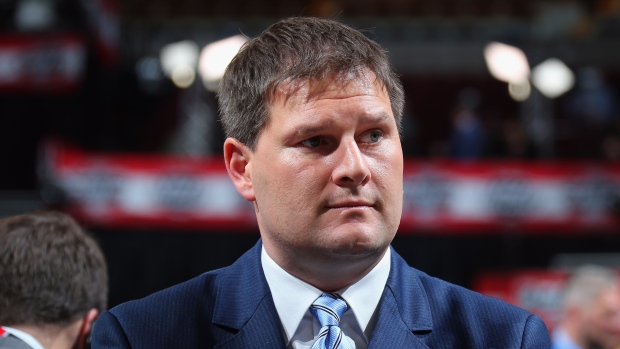 There is only one common thread that ties the last nine Buffalo Sabres seasons together: They’ve all been played under the watchful eyes and active hands of owners Terry and Kim Pegula.

Exactly three weeks after giving GM Jason Botterill a public vote of confidence on May 26, the Pegulas changed course and added to the turmoil on Tuesday, cleaning house in the hockey operations department.

Botterill was fired after three seasons, along with his top deputies in assistant general managers Steve Greeley and Randy Sexton.

Later Tuesday, the Sabres announced they fired Chris Taylor, the head coach of their American Hockey League affiliate, the Rochester Americans, as well as assistants Gord Dineen and Toby Petersen. In addition, the Sabres let go director of amateur scouting Ryan Jankowski and other members of the scouting staff.

One of the NHL’s most dysfunctional franchises over the past decade is starting over from the top down. Again.

The Sabres replaced Botterill with former NHLer Kevyn Adams, a Western New York native who has served the franchise as both GM of the team’s Harbor Center practice facility and, most recently, as senior vice-president of business administration.

Adams, 45, won a Stanley Cup with the Carolina Hurricanes in 2006 but has zero high-level hockey operations managerial experience. He became a certified player agent at the conclusion of his 540-game NHL career.

The question now is how much of a voice coach Ralph Krueger will have in the player personnel process.

Kim Pegula told the Associated Press on May 26 that the plan was to continue with Botterill at the helm, citing the importance of the continuity he provided entering an uncertain and extended off-season.

"This decision was made after many candid discussions with Jason during a full review of our hockey operations,” the Pegulas said in a statement on Tuesday. “We recognized we have philosophical differences regarding how best to put ourselves in a position to compete for a Stanley Cup. So, we decided to make this change.”

What changed over the last three weeks?

According to sources, the Pegulas held a series of meetings with Botterill over the ensuing weeks with a focus on restructuring the Sabres’ hockey operations department.

There were “philosophical differences” in that restructuring process. Sources said the Pegulas sought to shrink the staff, including cuts in scouting and management departments, in order to re-envision how it operated. Botterill was opposed to those changes, potentially viewing it as an unwelcome cost-cutting procedure.

"We're going to get leaner," Terry Pegula said in a conference call with reporters Tuesday. Pegula also declined to commit to hiring assistant GMs for Adams.

"When we were in detailed discussions with Jason and how we felt we needed to move forward effectively, efficiently and economically running this franchise, we felt there were too many differences in opinion," Pegula said.

Pegula Sports and Entertainment, the Sabres’ parent company, has pulled the purse strings in recent months. The Sabres’ management team, including Botterill, were forced to take temporary salary reductions – even though the non-playoff bound Sabres had just six home dates remaining at KeyBank Center. The Sabres also laid off 21 employees and furloughed 104 more in April, and have since fired additional staffers.

The Buffalo Bills organization, also owned by PSE, has not been impacted.

Financial information is not available on the privately-held company, but sources indicated that the Sabres have lost money virtually every year of Pegulas’ ownership, including significant losses of upwards of $30 million per season in some cases.

Forbes Magazine reported in December that the Sabres earned $1 million during the 2018-19 season before interest, taxes, depreciation, and amortization - while holding one of the league’s higher debt-to-value ratios at 20 per cent.

All of that could help explain why there has been a belt-tightening around Sabres operations.

For now, though, fans want to know how Adams plans to improve a franchise that has seemed to be stuck in rebuild mode for a decade. No one – from Pat Lafontaine’s ill-fated three-month tenure to Tim Murray to Botterill – has been able to find the right mix under the Pegulas.

Since taking ownership in Feb. 2011, Buffalo ranks last in points percentage at .440 with a 260-343-88 record. They have finished eighth in an eight-team division four times since the NHL realigned seven seasons ago.

That has all happened despite the fact that the Sabres have averaged the sixth-overall pick in the last nine drafts. They won the Draft Lottery in 2018 and selected Rasmus Dahlin, while picking Jack Eichel and Sam Reinhart at No. 2.

Murray was fired as GM in 2017, but remains on the Sabres’ payroll through June 30. Botterill inherited Murray’s mess, then struggled to surround his top-end young players with enough talent.

Botterill's biggest omission in three years at the helm was not producing a tangible return when trading unhappy centre Ryan O’Reilly, who won the Conn Smythe Trophy as playoffs MVP and Selke Trophy as top defensive forward while helping the St. Louis Blues to their first Stanley Cup in franchise history last season.

Botterill sent O’Reilly to St. Louis for Patrik Berglund, who played just 23 games before walking away from more than $10 million and leaving the NHL, as well as Vladimir Sobotka, prospect Tage Thompson, a conditional 2019 first-round pick (Ryan Johnson) and a 2021 second-round pick.

Botterill also seemed to be making some progress. He hired Krueger, who is well-respected and began to turn the ship around this season.

But the stench that has stewed along the Erie Canal always seemed bigger than Botterill, and it certainly predated him.​

Eichel hasn't sniffed the playoffs in his five NHL seasons, despite turning in an MVP-quality campaign last year. He was named Buffalo’s captain two seasons ago and voiced his frustration yet again after the season’s official conclusion last month.

Nine seasons in, they've gone exactly nowhere. And now the Pegulas have made an even bigger bet on a manager with little to no experience as they try to pick up the pieces once again.