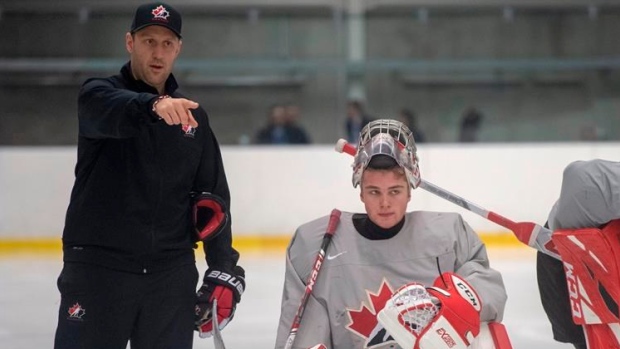 Following an emerging trend in the National Hockey League, the Calgary Flames announced the creation of a goaltending department on Wednesday.

As part of the new structure, current Flames goaltending coach Jordan Sigalet will oversee the goaltending development of all the organization’s goaltenders, including those in the minor leagues and prospects. Sigalet, a former Boston Bruins prospect, had spent the previous five seasons as the Flames’ goalie coach.

Jason Labarbera, who is currently in the Edmonton bubble as Team Canada’s goalie coach at the World Juniors, will become the Flames’ full-time goalie coach.

Labarbera, who suited up for 187 NHL games with the New York Rangers, Los Angeles Kings, Vancouver Canucks, Arizona Coyotes, Edmonton Oilers, and Anaheim Ducks during a 17-year pro career, had spent the past four seasons as the goalie coach of the Calgary Hitmen of the Western Hockey League, which shares the same ownership group as the Flames.

Thomas Speer will continue in his role as the​ AHL Stockton Heat’s goalie coach, while also working with Flames’ prospects at all levels.

“The goal and mission of this change is to provide us with the best process to identify, draft, develop, procure and coach goalies for the Calgary Flames,” said Flames general manager Brad Treliving in a statement announcing the new department. “We believe this structure and process will provide us with the best and deepest goaltending expertise throughout all parts of the organization.”

In recent years, National Hockey League teams have invested more resources into the development and coaching of their organizations’ goaltenders. In 2015, the Toronto Maple Leafs hired Brian Daccord, a former coach with the Boston Bruins and in the Deutsche Eishockey Liga in Germany, as the league’s first full-time goalie scout.

Current backup David Rittich is one of the only players the Flames have developed into a National Hockey League goalie over the past 15 years. Since 2005, the organization has used high draft picks on the likes of Leland Irving (26th overall in 2006; 13 NHL GP), Jon Gillies (75th overall in 2012; 12 NHL GP), Mason McDonald (34th overall in 2014; 0 NHL GP), and Tyler Parsons (54th overall in 2016; 0 NHL GP). Joni Ortio, a sixth-round pick in 2009, started 37 games for the Flames over parts of three seasons, winning 15 games with a 0.901 save percentage. Laurent Brossoit, picked in the sixth round in 2011, went on to start 68 games for the Edmonton Oilers and Winnipeg Jets, including 19 last season.

Flames prospect Dustin Wolf, drafted in the seventh round in 2019 and the 2020 CHL goalie of the year, is likely to see some action in Edmonton for the United States at the upcoming World Juniors.

For the Flames, the creation of the goaltending department comes in the aftermath of an off-season that saw them sign Jacob Markstrom to the richest-ever contract they’ve given a goaltender. Markstrom, a former Panthers prospect who finished fourth in Vezina voting last season with the Vancouver Canucks, will earn $36 million over the next six years.

The Flames hope that Markstrom and the new department will put an end to the franchise’s perpetual question mark between the pipes. Since Miikka Kiprusoff retired in 2013, the Flames have had 13 goalies start a game for them - and exactly one playoff series victory.

Last season, the Flames ranked 16th in the league in goals-against average (3.06) and five-on-five save percentage (0.918). In the NHL’s Return To Play, Flames netminders Cam Talbot and Rittich allowed a combined seven goals on 24 shots when the team was eliminated by the Dallas Stars in game six of the Western Conference quarter-finals.

"Priority was our goaltending,” Treliving said at the time of Markstrom’s signing. “There’s not a great deal of guys who can jump in there and play 50 to 60 games a year. When you have a horse who can go in there that much, it’s a special skill set.”