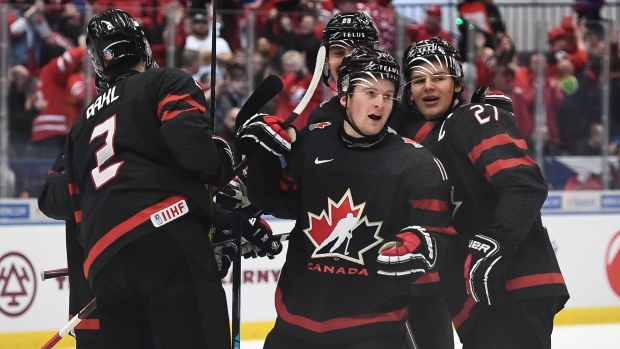 OSTRAVA, Czech Republic — Some 7,000 kilometres away, Noah Dobson was smiling in his Toronto hotel room as he prepared to face the Maple Leafs on Saturday night.

“I’ve been rooting for them the entire tournament,” Dobson said. “But especially today against the Finns after being in the dressing room last year and knowing what it felt like.”

Dobson felt it as much as anyone. One year ago, his stick exploded on a one-time attempt with a wide open net in overtime. He was that close to putting away the Finns in the quarterfinal in Vancouver. The puck was in Canada’s net seconds later.

Dobson, still just 19, was eligible to return this year but couldn’t be in the Czech Republic on Saturday because he’s making a living with the New York Islanders.

Saturday’s semifinal rout of Finland was the next best thing.

“I knew how motivated they would be to get the job done today,” Dobson said. “Now hopefully they go and win a gold medal.”

And since redemption has somehow become the theme of this World Junior Championship, Team Canada will be facing Russia, with a chance to avenge the most lopsided loss in the country’s history from the preliminary round on Dec. 28.

“It wasn’t our best game of the tournament, so we want to redeem ourselves for that,” Joe Veleno said. “It means a lot. The whole goal of this tournament is to play for that gold medal and it’s going to be real special.”

Semifinal Saturday played out exactly as no one expected. Team Canada blew the doors off the defending champion Finns, a stingy and smart squad that stifled Team USA’s firepower in the quarterfinals.

Canada scored three times before the contest was four minutes old, cruising to an easy 5-0 victory in front of more than 3,000 Canadian fans inside a sold out Ostravar Arena.

Players like Dobson were on the minds of Team Canada’s five returnees on Saturday.

“We did the best we could for him and all of Canada,” Veleno said. “We’re playing for all the Canadians out there.”

Meanwhile, Canada and Russia will square off for gold for the eighth time. Canada holds a 9-7 record all-time in the gold medal game since 1996, when the IIHF instituted the medal round format.

But Canada is 4-4 all-time against Russia with the tournament’s top prize on the line, winning the last meeting in 2015 in Toronto with Connor McDavid and Max Domi leading the way.

Their 2011 matchup in Buffalo - a memory Canadian fans would love to forget, with Canada blowing a three-goal, third period lead - went down as the worst loss for Canada at the World Juniors.

Eight days will have gone by since then and Team Canada has faced every piece of adversity head-on, including losing top pair defenceman Bowen Byram after warmup because of an illness. Jamie Drysdale stepped in seamlessly to the top unit, becoming just the fifth 17-year-old defenceman to score for Team Canada.

“The boys have dug in,” coach Dale Hunter said.

There may still be more to face. Dylan Cozens, McMichael and Byram are all battling a cold/flu bug that has made its way through the team.

Plus captain Barrett Hayton’s status is up in the air. He left the game midway through the third period after an apparent shoulder injury; the only positive sign was that he lingered on the bench for a while before ultimately leaving with the game well in-hand.

“He’s being evaluated,” Hunter said. “We don’t know for sure.”

With or without Hayton, Russia knows they will be facing a different opponent.

For one, Canada has a goaltender now. Joel Hofer entered for Nico Daws in that second period against Russia and hasn’t relinquished the post. He has stabilized Team Canada.

He’s a safe bet to be named the tournament’s top goaltender on Sunday. Even with those two periods of mop up duty, Hofer has a tournament-best .946 save percentage. The Portland Winterhawks product has allowed just two goals in his four starts, a ridiculous .979 mark.

“He’s calm and he controlled the rebounds really well, so that makes us all feel confident all game,” Dellandrea said.

There is a common thread that ties all Team Canada gold medals won overseas together. All eight times Canada has won gold in Europe, Canada’s No. 1 goaltender was named the No. 1 goaltender of the tournament.

Perhaps that is the omen Canada needs to stifle the Big Red Machine.

One loss avenged, one more to go.

"You know something, we've got to let games go. This is a new game," Hunter said. "That’s what we came here for. The gold medal. One game. Winner takes all. It can’t get any better than that.”