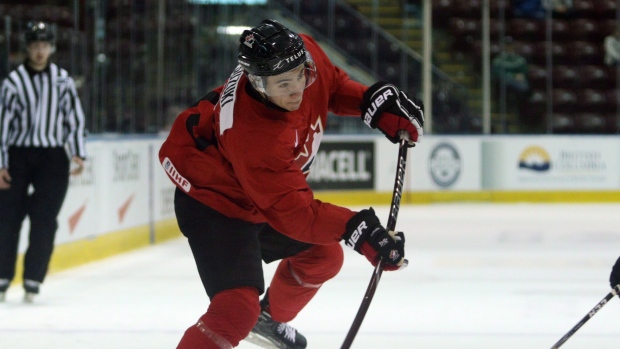 TSN reporter Mark Masters checks in daily with news and notes on Team Canada, who practiced on Sunday in Wurtele Arena at CFB Esquimalt.

If injured forwards Jaret-Anderson Dolan (wrist) and Gabriel Vilardi (back) are able to play at the World Juniors, then Team Canada will need to release one more player and a decision on who that will be has already been made.

"The person knows," head coach Tim Hunter revealed after practice. "The 11 guys know who they are and then we got the two injured guys and our extra forward so everyone knows who they are. We were transparent with the whole group so no one's kind of jittery thinking, 'Well, geez, have I really made the team?' The guys who made the team, made the team and they know it."

The fourth line at Sunday's practice featured Rimouski's Alexis Lafrenière, Drummondville's Joe Veleno and Hamilton's Mackenzie Entwistle. All three were considered to be on the bubble late in the selection camp. Lafrenière, 17, is the youngest player remaining.

The most likely odd-man out candidate, if JAD and Vilardi can both play, is Alexis Lafreniere, the youngest player currently with the team. https://t.co/Yl88ZKlgYi

Anderson-Dolan and Vilardi both practiced fully on Sunday, skating on a line with centre Nick Suzuki.

"Both guys wanted to take part and they wanted to get out and be part of all this and be on a line and be part of the group," said Hunter. "That's a great sign for them both mentally and physically."

The only player absent from the workout was Prince Albert winger Brett Leason, who blocked a shot off his hand in the third period of Friday's scrimmage against the uSports All-Stars and didn't return.

"Brett is still a little tender, so we just held him off and let that kind of settle before we put a little bit of a protector on things and then we can have him back in practice," Hunter explained.

Team Canada is scheduled to have two more practices before playing the first of three pre-tournament games on Wednesday against Team Switzerland.

With Alex Formenton ruled out with a knee injury, Maxime Comtois will be the only returning player on Team Canada's roster at this year's World Juniors.

"Alex was going to be a big part of our team," Comtois acknowledged. "Being the only returning guy here, it will be my job to lead this team on what it takes to win a gold medal. I’m not going to change because of that. I'll just try and show them how to perform by my actions on the ice and by the way I act off the ice and if they have any questions I'll be ready to answer at any time. I'm just going to be there for them."

"He has an innate ability to lead," observed Team Canada management group member Steve Staios. "And I don’t even think he really realizes it yet, but you can see the players gravitate to him. And the way he represents himself and the team through practice and even through the games here, he’s a true leader."

Comtois doesn't just have World Junior experience, he also played 10 games in the NHL this season with the Anaheim Ducks, where he was impressed by the leadership style of Ryan Getzlaf especially during a seven-game losing streak in late October.

"Always was the same," Comtois noted. "He had a tough game, whatever. He had a good game, whatever. He always was the same with the right attitude. He’s there for everyone, especially the rookies. We didn’t know what to expect and he was always there if we had questions. And sometimes it was just stupid questions and he was always there and that’s the main thing I learned."

Comtois is oozing with personality and the big left winger didn't shy away from the spotlight despite being a younger member of last year's gold-medal-winning squad.

"His play also dictates it as well," said Staios, "the way he kind of attacks the game and takes charge out there. Certainly through the room he has a presence, but also a calmness and a good way about him so there’s some natural abilities there."

"I have a little bit of the same personality as Getzlaf," Comtois said. "Just a funny guy who just tries to make everyone comfortable in a practice or in a tough situation when there’s a lot of pressure. I like to be in those shoes and it’s always been a part of me."

Canada wrapped up practice on Sunday with a fun shootout drill. Each player got a chance to take a breakaway against Michael DiPietro or Ian Scott while teammates had to skate to the far boards if they thought the guy would score or the near boards if they felt the shot would be stopped. Then if they picked wrong they had to skate back and forth between the boards as punishment. It's a drill Hunter picked up from one of his coaching mentors Ron Wilson.

And even the coaches took shots at the end.

What was going through Scott's mind as Hunter skated in on him?

"Whether I should let him score or not," the Maple Leafs prospect said with a chuckle. "So, yeah, I just kind of stood there to see what would happen. I think he put the puck into me so I was kind of lucky, didn't have to make a decision."

"Very, very, very well below average," Hunter said with a grin when asked to assess the performance of him and his staff. "But it was meant to have a little fun."

The drill ended when goalie consultant Fred Brathwaite beat DiPietro five-hole and was mobbed by the players, who had all picked him to score.

"Freddie came in with a lot of speed there," a deadpan DiPietro said. "Very deceptive shooter as we know and has a knack around the net and knows the weak spots to shoot. I'm just happy he didn't fall on the way in so he's nice and healthy and no broken bones."

"I'm not going to lie to you," said the 46-year-old Brathwaite. "I paid off Mikey before I went."

As for the other coaches?

"Oh, I have bragging rights," Brathwaite said. "They have the first round tonight for sure."

There were a lot of laughs, but there was a purpose to the proceedings beyond team building.

"We videotaped the guys so they'll learn what looks good and what doesn't look good and what works and what doesn't work," said Hunter. "We'll have a presentation for them about the shootout and every day we'll work on it and we'll slowly work towards a group of guys that are going to have success."

Hunter was an assistant coach on the staff of Dominque Ducharme two years ago when Team USA beat Team Canada in a shootout in the gold-medal game.

"All of Hockey Canada is looking at this very seriously," Hunter said. "You watch the U17 and there were some shootout mishaps there and some other events, our event with the silver medal. Not that we didn't work on it before, but we will now work on it a lot smarter and a lot more methodically and with more science behind it and more numbers and facts. We can go to the players and show them which moves work, why they work, what it takes to get a goalie to bite on certain things and we'll work with that through the tournament. If we get into a position where we need to go to a shootout we'll be prepared."

Lyle Mast is also on hand at the camp and Brathwaite noted the goalie guru has been studying the shootout and will be imparting some wisdom on DiPietro and Scott.

When Portland Winterhawks centre Cody Glass was a final cut at Canada's selection camp last year Hunter, then an assistant coach, had a simple message for him.

"He said, 'Just get stronger,'" Glass recalled, "and I really took that (to heart) going into the summer camp and training with Gary Roberts and that really helped me."

It was the first time Glass had worked with the former NHLer and renowned trainer.

"I feel like (I have) more muscle. That’s huge. Obviously, they have the meal plan for you there and they want you to eat the right things."

Glass receives monthly emails from Roberts and his staff regarding his diet.

"I’m still a teenager in junior hockey so I’ll have a couple desserts here and there (smile), but I feel like I’ve matured in that area as well."

The first pick in the history of the Vegas Golden Knights, Glass skated on a line with Max Pacioretty during a couple NHL pre-season games this fall.

"What sticks out about him is his hockey sense," Pacioretty said during a November interview. "Oftentimes when you’re talking about the big guy you’re talking about the big body and using it and hands and shooting, but he’s a little bit like Jumbo Joe (Thornton), I feel like, in the sense that his hockey sense is his best asset ... He has a really good knack for the game. He loves hockey, you could tell by how he talks and sees the game. Guys like that see the game a little bit different than everyone else and that’s why they have success."

That's high praise but Glass, a Winnipeg native, believes there's a better comparable for him in today's NHL.

"I’d say Mark Scheifele. I feel like everyone’s been comparing me to him and I’ve been watching him a lot since Winnipeg came back so I really enjoy watching his game. But (smiles) getting compared to Joe Thornton is not bad. He’s got more than 1,000 points so that’s not bad at all."

What does Glass admire about Scheifele?

"Just his work ethic. He plays a two-way game and I feel like the way he went through junior is kind of the same as me. He took it one year at a time and he got stronger and that’s what I’m looking forward to doing."

Glass is certainly trending up. After posting 54 points in 26 WHL games to start the season, he projects to be a top-line centre with Team Canada. He's been skating on a line with Comtois and Owen Tippett so far at camp.

"I think I matured a lot since last year," Glass said. "Obviously, didn’t know what to expect and was a little bit timid last year. I feel like I can be an impact player. That’s my mindset going into this."