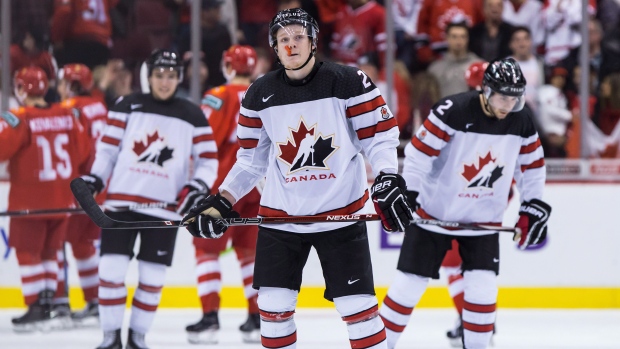 VANCOUVER — It was the maiiiiiiin event of the 2019 World Junior Championship preliminary round, as Maxime Comtois roared pre-game in his best Bruce Buffer voice.

Tensions were high. Emotions were charged. The stage was set for high-speed, high-skill, high-event hockey.

But when the puck dropped, Team Canada - by their own admission - got wrapped up in it all.

“I think maybe we bought a little bit too much into the hype,” Comtois said. “Maybe some guys weren’t aware of, you know, being loud in the stands in these types of games.”

“I think emotions might have gotten to us,” Cody Glass said. “I think we were yelling at the refs quite a bit, especially myself. I think the game was getting in our head a little bit.”

At the end of the night, the Russian Federation’s national anthem played in Vancouver.

The good news for Team Canada: “Now we know what to face,” Comtois said.

The bad news for Team Canada: “It’s going to get bigger and bigger. Tonight is like the last rehearsal for it. The next game you don’t have a gimme where you lose a game and still move on,” coach Tim Hunter said.

The gold medal cannot be won on New Year’s Eve, but it can certainly be lost. Because after the Russians punched first, knocked Comtois and Canada off their game, and skated off with a 2-1 win on Monday night, the road to gold has gotten significantly rockier now. They would’ve had to beat only two good teams to win gold. Now it’s three.

A cupcake in Slovakia - a team that has been outscored 12-4 in their three preliminary round losses - was waiting with a win. That treat is reserved for Group A winner Russia now.

Instead, Team Canada will face Finland in the quarterfinal knockout round on Wednesday night (6:30 p.m. ET on TSN 1/3/4/5 and 4K). The Finns beat Canada, 5-2, in a pre-tournament game on Dec. 23 in Victoria - their only loss prior to Monday.

What Team Canada is facing with a loss on Wednesday is history, potentially the worst showing ever on home soil. No Team Canada has failed to medal at home.

“I haven’t really paid attention that much: is Slovakia that much worse than the U.S. or Finland,” Hunter said, downplaying Canada’s opponent. “I’ve been busy watching our team and the teams we’re playing … I’m not worried about who we’re going to play. You can’t do that in this tournament, especially when you lose a game and don’t win your pool.”

Like his players, Hunter called the loss to the Russians “a lesson.”

“We get to learn a lesson. It’s a free lesson,” Hunter said. “We’re not eliminated.”

What stings for Team Canada is that Group A was there for the taking. The shots were 31-31, Hunter said the scoring chances were 11-10, also nearly even.

But Canada’s focus waned, as it had against Switzerland two games earlier. It didn’t bite them then, but it did against an equally-talented Russian team.

“I think we had mental lapses during the game,” defenceman Markus Phillips said. “I think that was on us. We’ve got to stick to the game plan and not take any minutes off.”

The glaring weakness came when Boston Bruins seventh-round pick Pavel Shen danced through Team Canada’s top line and top defensive pair to net the game-winner with nine minutes to play. Phillips said he “took the wrong angle on him.”

Russian goaltender Pyotr Kochetkov was sensational, stopping 30 of 31 shots, to stun the Canadians in front of a 17,500 sellout crowd on home soil. Shen’s goal marked the first time Team Canada trailed in the tournament

The entire night was a shock to the system for Team Canada - from the emotion, the volume of the crowd and the magnitude of the stage, to the strength of the opponent.

Hunter said Team Canada “stubbed its toe” against the United States outdoors in the preliminary round last year, and then rebounded for gold.

“I’m glad it happened in a round robin game than an elimination game,” Glass said, echoing the thoughts of an entire country. “We’re going to fix our mistakes.”