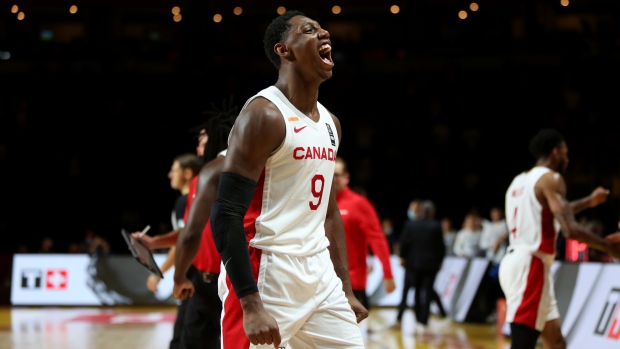 TORONTO – The ink had barely dried on the box score following the latest in a long line of disappointing defeats for the Canadian senior men’s basketball team as Nick Nurse sat in his office and began to diagnose the root of the problem.

Talent was not an issue. The roster included eight of the 13 NBA players that participated in last summer’s six-team qualifying tournament in Victoria, B.C. The program and its sponsors had invested considerable resources to host the event on home soil, so it wasn’t for a lack of opportunity either.

The team from Czech Republic that upset them in the semi-finals featured just one NBA player, veteran guard Tomas Satoransky. However, just like the Venezuelan club that knocked Canada out of the 2015 FIBA Americas tournament in similar fashion, they had the benefit of experience and chemistry.

Those who fail to learn from the past are destined to repeat it. For Nurse to lead Canada back to the Olympics, he knew it would require a significant shift in approach.

“We saw and learned a lot from Victoria,” said Nurse, the NBA champion head coach of the Toronto Raptors, who has also been at the helm of the Canadian national team since 2019. “The team that beat us had been together. I think they returned nine players from their fourth or fifth-place finish at the [2019 FIBA] World Cup, and I think we returned one. So, I think our guys understood we lost to a team that had been together for many years, probably more than anything else. I think we learned from that and I think our guys felt that.”

On Tuesday, Canada Basketball revealed a diverse and talented 14-man core roster for this summer’s qualifiers, as well as upcoming summers leading to the Paris 2024 Olympic Games.

But the biggest takeaway shouldn’t be all of the talent that’s on this list; Canada has put together loaded rosters before. The headline here is that all 14 of these players have committed to the program, and not just for the time being but for this entire Olympics cycle.

“We decided coming out of Victoria that we needed more continuity,” Nurse said at a joint press conference with Canada Basketball and the Canadian Elite Basketball League at the Raptors’ facility, OVO Athletic Centre, on Tuesday morning. “We’ve gotta be able to coach fast and coach quick and coach on the fly, and when they’ve been in the program and they’re coming back and they know what we’re doing, we can get more accomplished in our short windows and obviously put a better product on the floor. Just be able to compete with the chemistry and the continuity that some of the other countries have. We’re taking a page out of their books.”

This is something that the program has long strived for, but it’s always been easier in theory than in execution.

Outside of the USA, Canada is the most-represented country in the NBA with more than 20 players appearing in a game last season. However, the nation’s so-called ‘golden age of basketball’ has yet to bear fruit on the world stage. They’re slotted 18th in FIBA’s world rankings and their Olympics drought has now exceeded two decades. Their most recent setbacks, ahead of Tokyo 2020 and the Rio 2016 Games, were especially glaring considering the expectations, internally and otherwise.

But having this much high-end talent can be a double-edged sword. On one hand, the country’s pool of players has drastically expanded from where it was a decade ago. On the other, recruiting its best players has historically been a challenge. And that’s not just a Canadian problem.

NBA athletes put a lot into their day jobs, as they should given what’s at stake. There are a lot of good reasons for them to politely decline an invitation to play for their respective countries during the summer. Some are nursing injuries, recouping after a long and gruelling season, or just prefer to spend the off-season training on their own schedule. Some are between contracts and can’t get insured to play, or have personal obligations.

While Canada has had a few good turnouts in recent summers, there’s been very little continuity from one year to the next. To Nurse’s point, Joseph was the only holdover from the 2019 FIBA World Cup team that came up short in China and the one that couldn’t get the job done in Victoria a couple years later.

With the deepest of deep player pools, the U.S. has the luxury of piecing together all-star teams and figuring it out on the fly. Other countries with fewer or in some cases no NBA players have the advantage of building and maintaining a core group. With FIBA’s qualification format, brief training camps and the way the international game is generally played, that makes a huge difference and often trumps talent and athleticism, as Canada can attest to.

“They’ve got continuity, they’ve got veteran players, they’ve got guys who have played for years on the national team and they lean on that, they turn it into a system, a physical FIBA style of game,” Nurse said. “So that’s where we’re trying to close that gap with some continuity. That’s the lesson that we learned in Victoria that we all see very clearly.”

“We literally got in my room together and started talking about what we need to do going forward,” Nurse said. “We were able to discuss that with a lot of the guys there.”

Next came a big meeting with many of the country’s best players and their representatives at the NBA Summer League in Las Vegas. Nurse and Rowan Barrett, general manager and executive vice-president of the senior men’s program, made a couple pitches. They wanted to have regular communication with the players – with their NBA teams and their agents and their families, sure, but also with each of the players directly. They also wanted a three-year commitment from them.

What started as an ask turned into a requirement. Some players – including the most notable omission from the aforementioned core roster, Golden State Warriors star Andrew Wiggins – expressed interest in playing for the national team but couldn’t commit to being available each of the next three summers. Those players were told thanks but, at least for now, no thanks.

“If there happens to be a spot open in any particular summer, we have communicated to some of the players that there could be an opportunity for you to tryout,” said Barrett Sr. “But looking at the number of players on this list, if all those players are able to play and they’re all able-bodied and ready to go, there won’t be any more room.”

Fourteen players made the commitment, but before they can vie for medal contention at the Olympics, or even punch their tickets there for the first time since 2000, they’ve got to qualify for next summer’s FIBA World Cup. They’re off to a promising start, having won all four of their games during the winter windows under the guidance of Nurse’s assistant coaches with the Raptors and with the national club, Nate Bjorkgren and Nathaniel Mitchell.

Next up, they’ll host the Dominican Republic in Hamilton on Canada Day and, presumably, it’ll be our first opportunity to get a look at this revamped roster. An important caveat though: this 14-man group is not necessarily the team that will suit up on July 1, or in any of the qualification windows after that.

Technically, what they’ve committed to is attending the first three days of training camp each summer. From there, there could be guys that are hurt or opt out of playing for contractual or a variety of other reasons.

“If they’re injured they still have to show up for the training camp,” Nurse said. “If they don’t, [they’re out]. That’s the commitment. We felt like that’s what was fair. If you can’t play because you’re injured, you can’t play, but we still need you to be a part of the team. We’re trying to build chemistry and cohesion.”

This summer alone, you have to imagine that Murray will be spectator after missing all of last season recovering from a torn ACL. Dort, who’s been out since February with a shoulder injury, is also unlikely to play. Other things can come up, both personally and professionally, so the roster will remain fluid to some degree. That’s where having a deep, and growing, player pool comes in handy.

If and when there’s a spot available, Barrett and Nurse can pull from their winter core, which mostly consists of international pros. They could also put a call in to Wiggins, Chris Boucher, Tristan Thompson, or any of the other guys who wanted to play but couldn’t commit to the full Olympic cycle.

The talent is there. So are the vision and the infrastructure, led by Canada Basketball president and CEO Michael Bartlett and Mike Morreale, CEO of the CEBL, which launches its fourth season this week. However, if they’re finally going to fulfil their immense promise, they’re going to need their best players to do more than just show up. They’ll need those guys to play, and to build something together.

“If this team can get on the floor and stay together for a couple of summers you’re gonna see a really good team,” Nurse said. “I’m excited to be able to build. I want to coach it like a team, a little bit more of a professional setup where you’ve got the same guys over and over so you’re not going back to square one every time you see them. We need to be able to build and expand our menus on both sides of the ball. I don’t want to coach it like a D-League team; I’ve had enough of that, where every game you’ve got four new guys [coming] in.”

“You’ve still gotta lace ‘em up,” said Barrett Sr. “You’ve still gotta lace ‘em up in between the lines and play. Sometimes the teams that have been more talented have gone into FIBA games and lost. So for us, we’re trying to establish ourselves now on the world stage. We’re not coming in like dominators; we haven’t done anything yet. We need to win.”