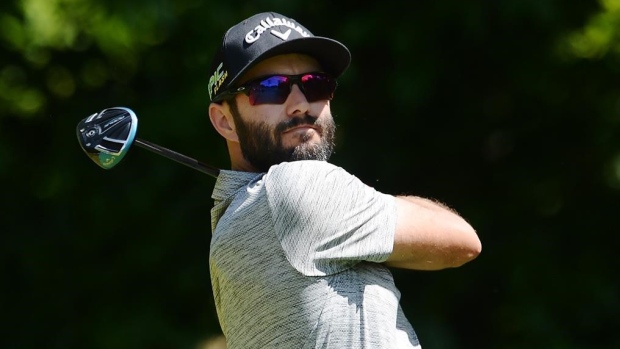 The depth of Canadian men’s golf has never been better.

This week, nine Canadians will tee it up at the Farmers Insurance Open, which is the most of any PGA Tour event held outside Canada.

Included are veterans such as Adam Hadwin and Nick Taylor, who have logged 198 and 204 starts on the PGA Tour respectively, as well as golfers like Max Sear, who will tee it up for the first time after wiggling through the difficult Monday qualifying.

“It hasn’t really sunk in yet,” said Sear, who had to first advance through a pre-qualifier a week earlier just to make it into the final qualifying. “I haven’t really had time to think about it.”

His welcome-to-the-PGA-Tour moment came when he pulled into the players’ parking lot on Tuesday morning and saw Jordan Spieth walk right in front of his car.

He then scrambled to register, find a caddie, and try to cram learning about two courses – the North and South at Torrey Pines – before his first round. This week’s tournament starts on Wednesday, which makes his job even tougher.

Sear, a left-hander from Toronto who now lives in Victoria, B.C., was joined by Jared du Toit of Kimberley, B.C., in getting through the Monday qualifying where four spots in the field are up for grabs.

“It’s pretty awesome to see so many Canadians in the field this week,” said Corey Conners, who is the highest-ranked Canadian in the world. “It’s fun to be a part of the growing number of elite Canadians making some noise in pro golf.”

There is no single reason why the Canadian men are so strong at the top level of the game right now but a number of factors have certainly contributed. The first is the build-up of Golf Canada’s development program of which all of the current PGA Tour members were a part. The top prospects are given access to instruction, training, sports psychology and international competition, which has given them experience and knowledge that used to take years to learn on their own.

The growth of PGA Tour Canada has also helped. It’s given young Canadian pros a place to start their professional careers.

“I give big credit to the national team program and PGA Tour Canada for allowing players to develop and compete against top players,” stated Conners.

Another factor was the success of Mike Weir, specifically his Masters win in 2003. The current Canadian crop can all remember where they were when Weir tapped in to win the Green Jacket. They can also point to that moment as one that proved to them making it to the top of the golf world was possible for a kid growing up in a land where golf courses are buried in snow half the year.

Sear grew up in Toronto where he lived across the street from the York Downs Golf Club. He recently moved to Victoria, B.C., with his parents where he plays out of the Royal Colwood Golf Club. He graduated from West Virginia University in 2019 before embarking on a professional career which started with a thud due to the pandemic. There weren’t many places to play.

Last year, he played on the truncated Canadian Tour with his best finish coming at the Prince Edward Island Open where he lost in a playoff.

This week is his first big step to where he hopes to end up.

Sear is realistic with his goals this week. He’s hoping to make the cut which would mean he wouldn’t have to play in any more pre-qualifying for the Monday qualifiers he plans to play on the West Coast and also in Florida when the tour moves to the East Coast.

But it’s hard not to be distracted when playing among the best players in the world.

“I’m hoping I can be focused on my game this week and not walk around with my jaw dropping open,” he said.