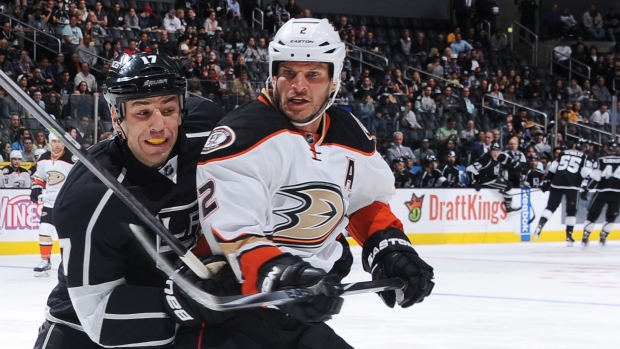 Vancouver, BC – The Vancouver Canucks will have their hands full Monday night at the Honda Center matching lines with the Anaheim Ducks and matching wits with former teammate Kevin Bieksa. The veteran defenceman with the short fuse and the sharp tongue was shipped to Southern California for a second round draft pick in the summer. While many of his former teammates have spoken to their friend since the deal went down, this will be the first time they've seen him.

Hardly a clean break, with Bieksa first rumoured to be headed to San Jose and then ultimately winding up in Anaheim, the move was one the Canucks felt they had to make in an effort to get younger on the blue line. While the rocky departure left the impression of friction between Bieksa's camp and the organization, the guys he went to battle with have only good things to say about a teammate who bled Canuck blue for a decade.

That includes Alex Burrows, whose relationship with Bieksa dates back to their time together as Canucks farmhands with the Manitoba Moose in 2004-05. Burrows admits it'll take some getting used to seeing a familiar face in different uniform.

"It'll be maybe a little weird seeing him in that jersey," Burrows said Sunday before the Canucks departed for a quick two game trip to Southern California. "I'm sure there will be a few smiles especially in the warm-up. Obviously I had so many good years with him not just on the ice but off the ice. He was a great friend and a better teammate. I'll try to get in a battle with him in front of the net or in the corner somewhere. But once the game starts going, you almost forget as a hockey player how good a friend you are with some guys. You just want to win. You want to win that puck. You want to win that battle. It'll be fun to play."

Kevin Bieksa spent his first 10 National Hockey League seasons in Vancouver playing 597 regular season games and another 71 in the playoffs. The 34-year-old was the Canucks top defenseman in 2007 and was also named the team's unsung hero that season. With his robust style and his refusal to back down from opponents, Bieksa became a favourite of the fans in Vancouver and was a big part of the most-successful seasons in franchise history culminating with his role in the Canucks run to the 2011 Stanley Cup Final.

Since then, like the team he played for, Bieksa's performance started to decline. At times last season it was tough to watch as he and his defense partner Luca Sbisa struggled. While there were definitely rough patches for the pair, Sbisa chooses to remember the positives he'll take from his season along-side Bieksa.

"He was a bit of a mentor for me when I first got here," Sbisa says after joining the Canucks from the Ducks as part of the Ryan Kesler deal the previous summer. "Obviously, I knew who he was and I knew what his status was on this team. He was a guy people looked up to and was a great leader on this team. He was a vocal guy and wasn't afraid to speak up, to speak his mind and tell the truth. He helped me a lot. I got to play with him and I think we had a good run. There were a couple of tough games, but overall it was good. It's sad to see guys like that go, but that's just the business side of hockey."

Based on Anaheim's season opener, the Ducks believe Kevin Bieksa still has some solid hockey in him. He played 24:26 – second on the team in ice-time – in the Ducks 2-0 loss in San Jose on Saturday. Last season under Willie Desjardins, Bieksa averaged 20:50 in 60 games.

Although the two spent just one season together in Vancouver, the man behind the Canucks bench included Bieksa in his leadership group and, at times, leaned on the rugged rearguard in his rookie season as an NHL head coach. And even though their time together was brief, it's clear Bieksa left an impression on Desjardins too.

"He's a real good person and he's a real heart and soul player," Desjardins says. "He plays hard and he'll play hard every night and he'll back his teammates. "You can't say enough good things about Kevin and he left his mark on the organization. It's not like as soon as he was out the door, we forgot about him. He's just a really quality person."

He just happens to be a good guy who now plays on another team. It's far too soon to know who won the June 30th trade that sent Kevin Bieksa to Anaheim. But for 60 minutes on Monday night, the Canucks have to find a way to put their long-standing friendships aside and do whatever it takes to get the best of their old buddy and his new hockey club.