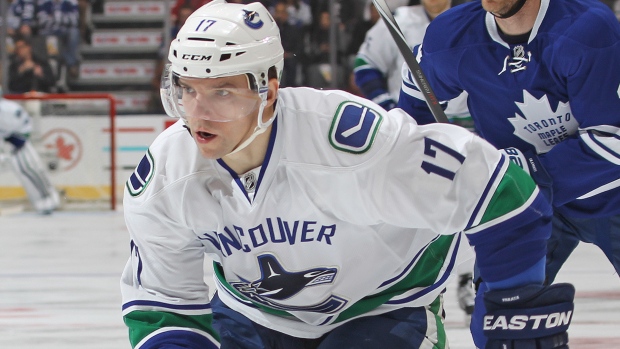 After hot starts to the season, both the Vancouver Canucks (3-2-2) and Detroit Red Wings (3-3-1) will try to put an end to losing streaks when they meet tonight at Rogers Arena. The Canucks bolted from the blocks with a 3-0-1 record, but have gone 0-2-1 in their past three and are 0-2-2 on home ice so far this season. The Wings won their first three games of the season, but have dropped four in a row (0-3-1) after a 3-2 overtime loss in Calgary last night.

Yannick Weber will replace Matt Bartkowski on the Canucks blueline and get a chance to work on the team's top power play unit. Derek Dorsett took part in an optional morning skate, but is questionable after missing practice Friday. If he can't play, Adam Cracknell will skate in his spot on a line with Jared McCann and Brandon Prust.

Canucks captain Henrik Sedin will play his 1100th NHL regular season game tonight. Fittingly, number 33 becomes the 33rd player in NHL history to reach the milestone with just one team. Sedin is coming off his first multi-point effort of the season with a goal and an assist in Thursday's 3-2 loss to Washington. Radim Vrbata scored his first of the season in that game.

Brandon Sutter has a share of the Canucks team scoring lead with 2+3=5 in seven games. His points, however, have come in two games – 1+1 on opening night in Calgary and 1+2 in a home game against St. Louis. Sutter went 13 & 2 in the face-off circle against Washington and is a big part of the Canucks sitting 2nd in the NHL on the draw at 53.8% behind only Carolina.

Daniel Sedin has registered 15 shots in the past three games and leads the Canucks with 32 on the season. Alex Burrows and Jannik Hansen both scored in their season debuts but have gone six games now without goals. Bo Horvat has gone five games without a point.

The Canucks have surrendered the first goal in five of their last six games and all four games on home ice so far this season.

Ryan Miller, the former Michigan State Spartan and East Lansing, Michigan native, will make his eighth straight start to the season for the Canucks. He faces his brother Drew tonight. Drew leads the head to head battle of the brothers with a 7-2 record posting one assist in nine career meetings.

The Wings are expected to go with Petr Mrazek in goal tonight after Jimmy Howard faced 40 shots in Calgary last night.  Mrazek has dropped two straight starts (at Montreal & at Edmonton) and his only victory of the season came two weeks ago tonight in Carolina.

Last night, Detroit got power play goals from Gustav Nyquist and Brendan Smith in their loss to the Flames. They also lost a pair of defensemen – Kyle Quincey and Mike Green were both shaken up in the game. Green is doubtful for tonight and Quincey (undisclosed) joins veterans Pavel Datsyuk (ankle), Johan Franzen (head) and Brad Richards (back) on the shelf. Alexey Marchenko has been recalled from the minors and Jakub Kindl, a healthy scratch last night, will likely draw in on defense tonight to cover the injuries.

Henrik Zetterberg comes into the night tied for third in NHL scoring with 2+8=10 while 19-year-old Dylan Larkin is just a point off the league rookie scoring lead with 2+5=7 in the first seven games of his career.

Landon Ferraro picked up the Wings first fighting major of the season last night when he dropped the gloves with reigning Lady Byng winner Jiri Hudler – the brief tussle was the first NHL scrap for each of them.