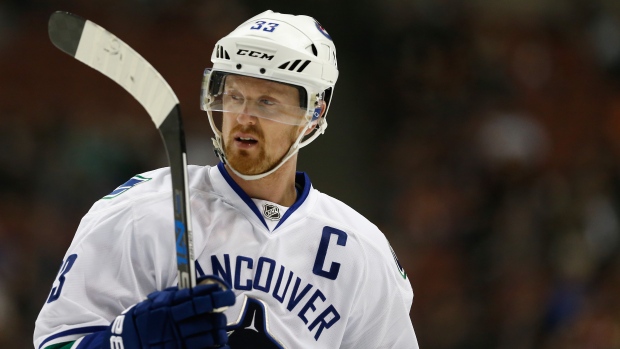 ***UPDATE: Henrik Sedin left Thursday’s game in Philadelphia early in the second period with a lower-body and did not return.***

PHILADELPHIA — For Henrik Sedin, watching Bo Horvat and Jared McCann walk into the rink recently is like watching a horror movie on repeat on a daily basis.

Horvat, 20, hasn’t scored in his last 20 games, dating back to Nov. 1 - the last time the Canucks faced the Flyers.

Sedin knows the feeling. The 35-year-old has lived with the baggage Horvat and McCann are carrying around with them from city to city.

It seems hard to remember now - especially for a former Hart and Art Ross trophy winner - but Sedin went through a similar (if not worse) skid during his third year in Vancouver. He was 22 then, hoping to follow up a breakout 16-goal sophomore campaign - and hold up his end of the bargain as a third-overall pick.

Sedin fell flat on his face. He limped through the first half of the 2002-03 season with just two goals in his first 48 games - none in his first 20. Sedin scored in game 21 that year, then just once more until game 49.

“You wake up and, first of all, you didn’t want to go to sleep because that means the morning is going to come fast at you. You don’t want to go to the rink and practise,” Sedin remembered. “There’s a lot of meetings, things you’re going to change. It’s not fun to see them go through this because we’ve been through that before.”

The Canucks’ captain and brother Daniel have done their best to help Horvat, McCann and the rest of their struggling teammates through an incredibly tough stretch. Vancouver has won just four games since Nov. 10, sliding from a tie for first in the Pacific down to 13th in the West.

“It’s not a good feeling,” Sedin said. “A lot of guys are squeezing their sticks. It affects a lot of other parts of your game as well. It’s not only when you get a scoring chance when you feel a little bit hesitant. It’s passing and the little things. The only way out of it is hard work.”

Sedin said he has confidence in both Horvat and McCann because of “the way they handle themselves.”

“It’d be different if you see them act differently,” Sedin said. “You feel like you let your teammates down. It might be easier to come in and think about yourself, but you have to take it the hard way. It means you have your head in the right spot.”

Sedin mentioned Horvat and McCann work hard, seek tips in video sessions, don’t use excuses and avoid coming to the rink in a bad mood.

Horvat said he’s heard all the chatter from fans and media and has tried to tune it out. He admitted his larger role this season, exacerbated by the absence of Brandon Sutter due to injury, has weighed on him.

“For me, I think the biggest opponent right now is myself - just trying to keep a positive mindset,” Horvat said. “You can’t let that stuff bother you, or else it’s going to haunt you. It’s been tough for me. It’s definitely not easy not putting the puck in the net and not putting up points.”

Horvat has focused on winning faceoffs, killing penalties and his defensive responsibilities to get him out of the slump. That’s the only way, Sedin said.

“I told them you have to try to keep doing the right things,” Sedin said. “I think this can still be beneficial for them. It’s going to make them better for the future. It doesn’t seem to affect them, but I know it does at home or at the hotel. I’m sure they think it’s never going to turn around, but it will. When it does, it’s going to be a good feeling.”