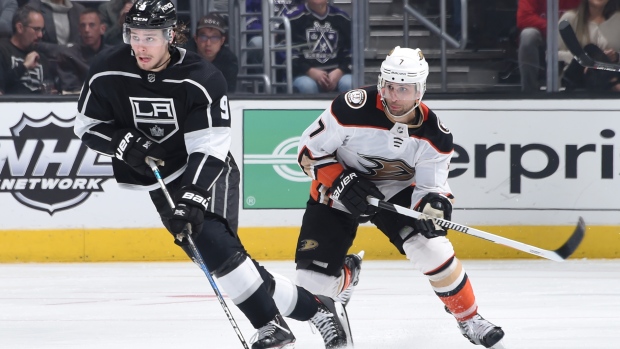 Cogliano, who hasn’t missed a single game since entering the NHL in 2007 with the Edmonton Oilers, will have a discipline hearing with the NHL’s Department of Player Safety on Sunday for his interference penalty against Los Angeles Kings forward Adrian Kempe on Saturday night.

A suspension would end Cogliano’s streak just the same as an injury or illness.

Cogliano’s shoulder connected with Kempe’s head while the puck was not in the vicinity, in a game in which there were three fights within the first three minutes.

Cogliano, 30, signed a three-year, $9.75 million contract extension with the Ducks on Friday, which reinvigorated talk that he could challenge Doug Jarvis’ record 964-game ironman streak.

Cogliano is 135 games away.

Jarvis appeared in 964 consecutive contests from debuting in the NHL on Oct. 8, 1975 with the Montreal Canadiens until Oct. 10, 1987 with the Hartford Whalers.

Cogliano was one of just three players, including Jarvis, to start a career with 800-plus consecutive games in not just the NHL, but also MLB and the NBA. Basketball player Johnny Kerr, who played with Syracuse, Philadelphia and Baltimore in the NBA, started his career in 1954 with 844 straight games.

Whether Cogliano’s run will continue rests in the hands of NHL dean of discipline George Parros. The two were teammates in Anaheim in 2011-12.