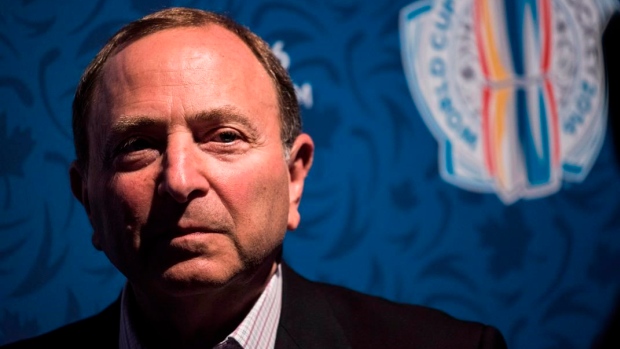 The National Hockey League’s policies on head injuries and concussions are attracting more scrutiny in Washington, where Democratic members of the House Committee on Energy and Commerce have joined the call for the league to explain how it cares for brain-injured players.

The politicians also ask Bettman the average length of time a player diagnosed with a concussion is benched before returning to play, and how concussed players are monitored over time.

In Major League Baseball, it’s mandatory that concussed players be placed on a disabled list for seven days before they return to games, the Representatives wrote, adding that U.S. Soccer protocol calls for players to be symptom free for 72 hours before a return to play.

“The NHL’s 2013-14 protocol has ‘no mandatory period of time that a player must be withheld from play following a concussion,’” wrote the representatives in a five-page letter obtained by TSN. “Nevertheless, you continue to praise the league’s player-safety measures as the ‘most proactive.’

“Given the greater awareness of the risks posed by repetitive head injuries — as well as the advancing science — the NHL must do its part to reduce the risk of head injuries and to make hockey, at all levels, a safer game. We urge the NHL to take a more active role is setting clear policies that bolster player health and safety.”

The Representatives ask the NHL to respond by Oct. 24. An NHL spokesman did not reply to an email seeking comment.

The NHL is locked in a high-stakes lawsuit with a group of former players who charge the league put profits ahead of their safety, marketing violence and urging injured players to return to action before they had properly recovered. The players have asked the court to order the NHL to pay for medical monitoring as they age.

The NHL says the litigation is without merit and that players should have “put two and two together” about the possible long-term health problems caused by repeated head trauma.

For months, the NHL has been in a back-and-forth debate with U.S. Senator Richard Blumenthal (Democrat, Connecticut.)

Blumenthal has said Bettman and the NHL have their heads in the sand regarding the connection between concussions and long-term brain damage.

In his letter to the senator, Bettman condemned “media hype driven in part by the plaintiffs’ counsel.”

Furthering the war of words, Blumenthal in August called on the NHL to fund research on concussions and brain trauma and said the league should “cease its attacks on the media, media consultants and lawyers and others who are advocates or activists.”

Pallone, one of the four Representatives who sent the NHL its most recent warning letter, oversaw a recent study that concluded that the NFL and its head, neck and spine committee worked to improperly influence the government research, trying to steer the study toward a doctor with ties to the league, The New York Times reported.

“Despite this candid discussion in email of the dangers of fighting and the related incidence of head injuries, the NHL continues to publicly deny a connection between head injuries and long-term complications such as CTE,” the representatives wrote.

The politicians asked the NHL to provide them with details of the league’s concussion protocol for the 2016-17 season and answer several questions, including:

- How does the NHL document diagnosed concussions — both in game and in practices?

- What new programs, initiatives and protocols is the NHL considering for the 30 NHL teams to protect players from the risks of repetitive head trauma?

- What new programs, initiatives, and protocols is the NHL considering for its affiliated development leagues, the AHL and ECHL, to protect minor league players from the risks of repetitive head trauma?

- How does the NHL work with youth hockey leagues to ensure players and parents understand the risks posed by the game? Does the NHL provide any training or guidance to parents and coaches on how to prevent and treat head injuries?

Michael Carrier, a political science professor at Rutgers Law School in New Jersey, said it’s possible that the representatives might ask Congress to hold hearings into the NHL’s oversight of player safety.

“They are asking these questions with the threat of the antitrust exemption hanging over the NHL,” Carrier said in an interview.

The NHL, along with other major sports leagues, is exempt from antitrust laws in the U.S., Carrier said. Without that exemption, broadcasters might sue the NHL for signing exclusive TV contracts, and team owners might enjoy more freedom to challenge the NHL over moving their franchises to different markets.

Even so, Carrier said it would be unlikely that Congress would look to repeal the exemption because that would be such a drastic change, and because many NHL team owners have political influence of their own.

“It’s far more likely that we could see Congress hold hearings, subpoena information from the NHL, and really put them under more pressure to explain their position on head injuries,” Carrier said. 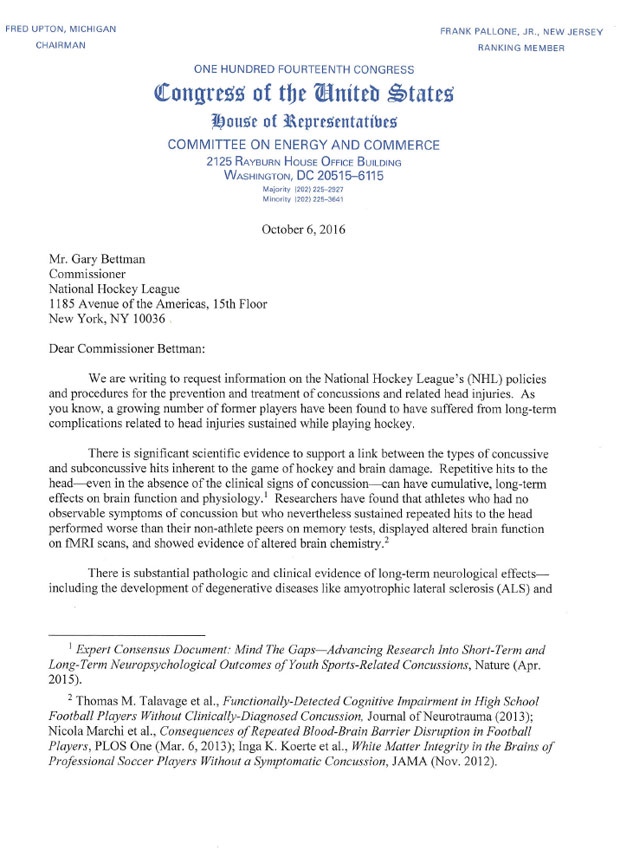 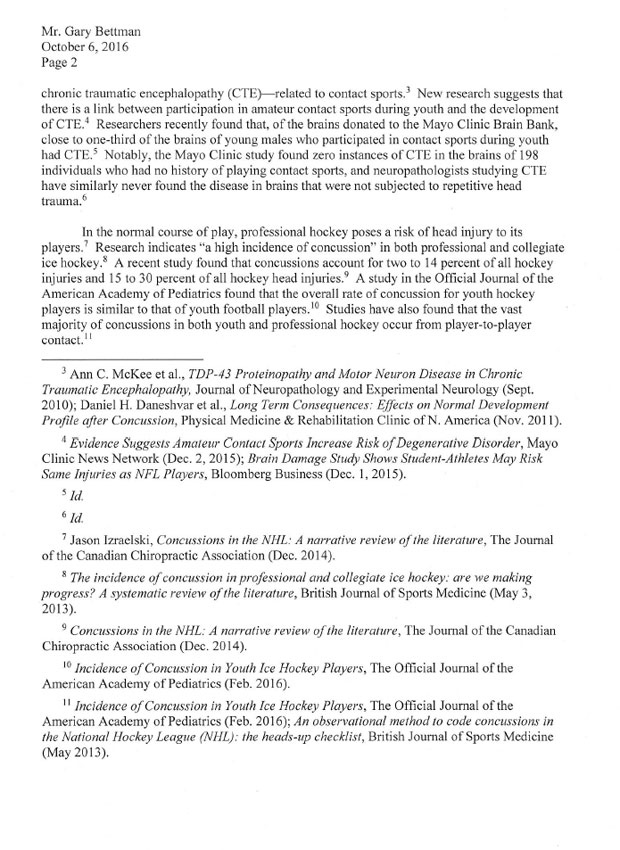 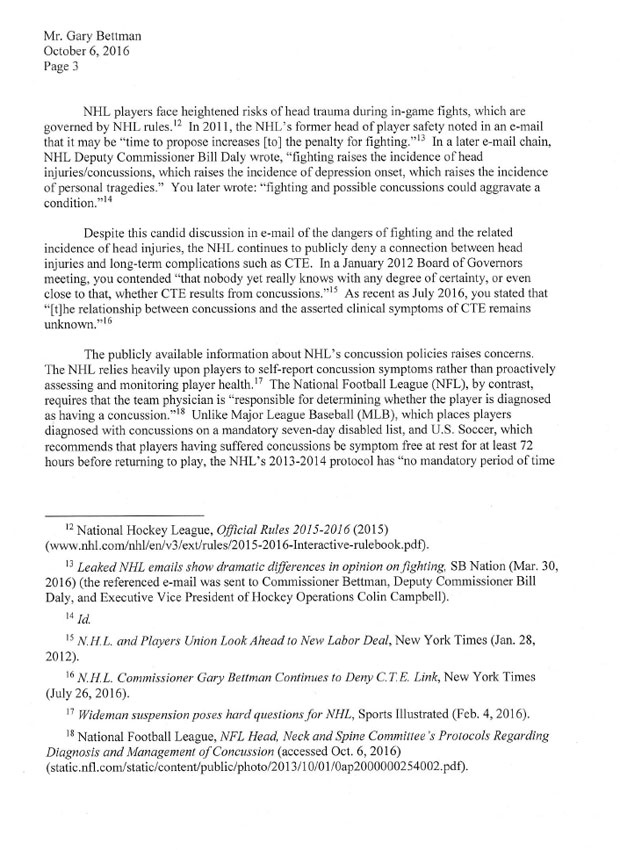 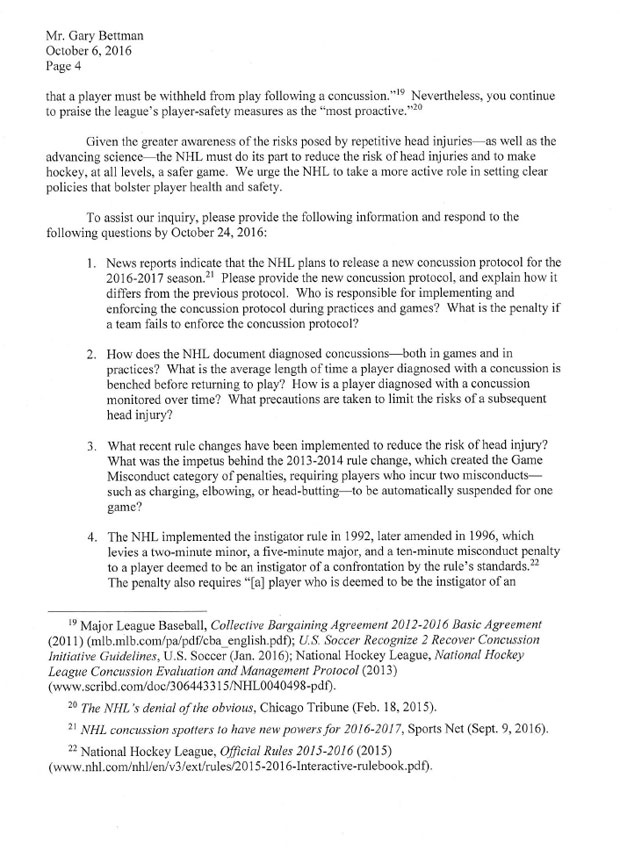 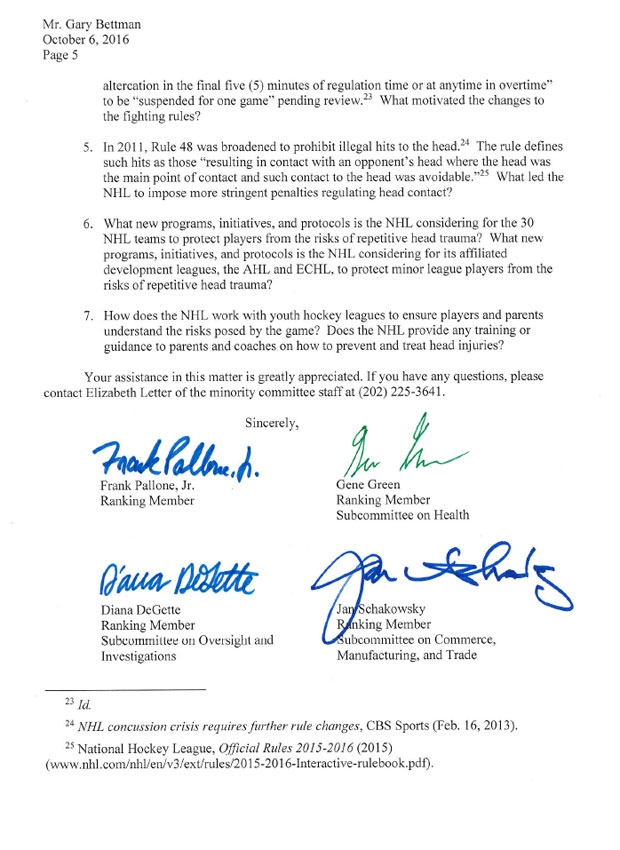