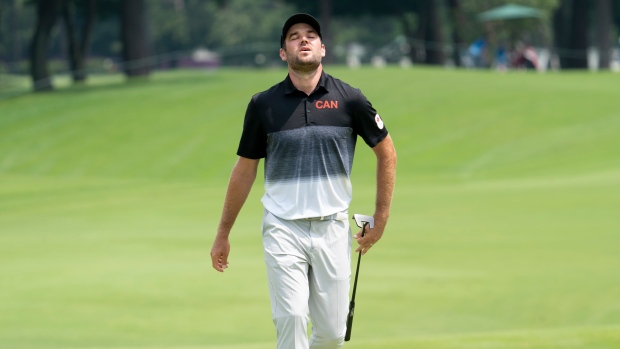 On a day when many of the top names at the Olympic men’s golf competition made bold moves up the leaderboard, Corey Conners and Mackenzie Hughes seemed to be stuck in neutral, unable to find any momentum. As a result, the two Canadians are back in the pack and needing a bold weekend for any hope at a medal.

The frustration of the round was etched on the face of Hughes’ face as he walked off the 15th green. Moments earlier, his birdie putt from six feet had slipped past the cup, missing yet another opportunity in a round where he had a handful. He ended up signing for a one-over 72.

“There's lots of positives to it, but I walk away disappointed,” a dejected Hughes admitted. “I'm further away than I started and I know I have a huge hill to climb this weekend.”

Normally one of golf’s best putters, he had chances to take his score lower but just couldn’t get the ball to go into the hole. A 12-footer on the first hole missed and after finding the bunker off the tee on the par-3 fourth, he couldn’t save par from 15 feet.

He finally managed a birdie on the sixth hole, draining a four-footer and then hit his tee shot on the 11th to two feet for a kick in birdie.

But clearly, his expression showed what was going on inside. Everything was just a little bit off. On the par-5 eighth hole, the second-easiest on the course, Hughes made par, just as he did on Thursday. In six opportunities through the first two rounds, he’s made just a single birdie on the three par-5s.

“I haven't been myself on the greens, haven't made much and putter's gone a little cold,” he said. “So if I can get that heated up and kind of bottle up some of those good swings, you never know. And that's why we're going to play four rounds and I'll give it my all for the next two days and we'll see what happens.”

In addition to the balky putter, Hughes said he hasn’t been comfortable with his swing through the first two rounds. It wasn’t that it was off by a wide margin, but just enough to give him fits. He’ll try to find that on the range and then take a more aggressive strategy into the week and hope for two low rounds.

Conners also struggled to find a groove with his game, canceling out birdies on six and eight with a double bogey on the par-4 ninth. That came when his tee shot found some deep rough and he was unable to reach the green. A wedge and three putts later led to the six.

To add to the frustrations, Conners was one of 17 golfers left on the course when the second of two weather delays stopped play late in the afternoon.  The first delay lasted two hours and the second one ended play for the day. He’ll have to return early on Saturday to finish up.

On the back nine he logged one birdie in his first seven holes. He wasn’t able to take advantage of the lone par-5 on the back, hitting his tee shot into the rough and being forced to lay up. His approach stopped 18 feet from the hole and he settled for a two-putt par.

At the top of the leaderboard is American Xander Schauffele, who recorded six birdies and two eagles en route to an eight-under 63. He is at 11 under for 36 holes, one better than Mexico’s Carlos Ortiz.

One of the biggest moves of the day came from Rory McIlroy, who posted a five-under 65 to get to seven under, just three off the lead.

After starting his round with five pars, McIlroy went on a tear, with birdies on six and seven and then an eagle on the par-5 eighth.

A drive into a fairway bunker on 11 led to a bogey but he countered that with three back-nine birdies including on the par-5 14th where he reached the 625-yard hole with a cut three-wood.

Being at the Olympics this week, even one as watered-down as this one, has changed McIlroy’s opinion of the games. In 2016, he wasn’t sure golf belonged in the Games, but has gradually come around to accept its inclusion. Now, he’s a full-on fan.

“I never obviously never competed in an Olympic Games,” he said. “I watched them from a far, but I said this yesterday, being a part of something that's completely different and bigger than me and even our sport in general, that's a pretty cool thing. So I didn't know if this was going to be my only Olympics that I play or whatever and I'm already looking forward to Paris.”

If he keeps his game hot as it was on Friday, he could head to Paris as the defending champion.