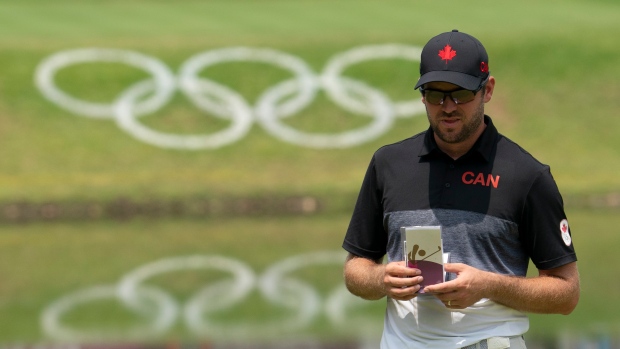 One went up, the other went down but neither one is leaving Tokyo with a medal, the goal when they arrived. Still, they will take with them the experience of competing in the Olympics and representing Canada on the largest stage in sports.

On Sunday, Corey Conners put together his best round of the week, a 65 that included eight birdies. Hughes, on the other hand, signed for his worst, a full 10 shots higher than his compatriot.

Starting the final round seven shots off the lead, the two Canadians played more aggressively, trying to fire at pins where possible and take chances they hadn’t tried for the first three days. While Conners managed to go low, Hughes struggled and wasn’t holding back his emotions after the round.

“It sucked,” said the dejected 30-year-old. “I sucked the whole day and (it’s) super disappointing.”

To add to the discomfort, Hughes played alongside Rory Sabbatini, who shot 61, and C.T. Pan who recorded a 63. Seeing both players fill up the cup made it that much tougher for the Canadian.

“Feel like you're getting run over by a transport truck, to be honest,” said Hughes, who made five bogeys and a double in his round. “It was really hard to compete those last bunch of holes, just had nothing and the guys I was playing with were tearing it up and it was just pretty helpless feeling.”

Hughes came in to the Olympics riding a wave of good play with top-15 finishes at the U.S. Open and the Open Championship. He had hopes of being in contention but will now have to wait for three years for another shot.

“Obviously I'm really proud to be from Canada and to wear the Maple Leaf,” he said. “I'm just really disappointed in the effort that I had this week and it will sting for awhile. But it will make me work hard for Paris and hopefully I'll be part of that team.”

On most days, Conners’s score would be great but on this day, with so many low rounds, it needed to be even better. He played the front side in three under on the strength of four birdies. The best of those came at the ninth hole where he managed to finesse a 4-iron out of a fairway bunker to 12 feet and roll in the putt.

On the back side, there were four more birdies but a bogey on the par-5 14th stung. For the week, he played that hole one-over, the same result he had on the par-5 fifth hole, missing out on some of the few opportunities on the Kisumigaseki Country Club course.

“I was trying to press a little bit to make as many birdies as I could and really gave myself some decent chances, really disappointed to bogey the 14th hole,” stated Conners. “They moved the tees up where the hole was reachable today where it really hadn't been that reachable in the previous few days, but made a bogey there. It was tough, but I followed it up with some birdies and didn't quite have my best stuff this week, but overall it was good last couple days.”

The highest-ranked Canadian on the Official World Golf Ranking, Conners had pegged the Olympics on his list of goals as soon as the 2016 Games concluded. He said despite coming up short of the podium, the overall experience was an unforgettable one.

“It's incredible to feel the love from everyone in Canada as part of the Team Canada and having a good friend Mac here was awesome to share that experience with him,” Conners stated. “Really cool to kind of feel that team atmosphere again like we had in college and some of the junior golf days.”

The two won’t have much time to rest and recover from the week. There are two more weeks left on the PGA Tour schedule before the FedEx Cup playoffs begin. Conners is in the field for next week’s World Golf Championship – FedEx St. Jude Invitational.