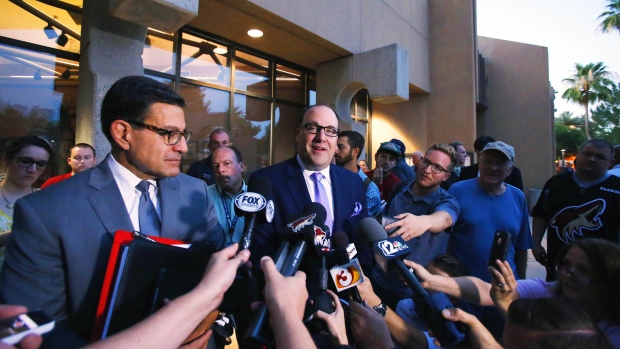 Arizona Coyotes part-owner Anthony LeBlanc promises a lawsuit against the city of Glendale is coming either late Thursday or early Friday.

On Wednesday night, Glendale city council voted 5-2 to cancel the agreement that sees the city pay $15-million per year to the NHL team to manage the arena.

During a conference call with media on Thursday afternoon, LeBlanc called Wednesday night’s decision by Glendale city council “deplorable” and promised to file either today or tomorrow a request for an injunction with the court, as well as a lawsuit.

“I’m talking all day all night to sponsors, season ticket holders,” LeBlanc said. "They want to know if they can hold off on their payments.”

LeBlanc said he and other owners have not contemplated moving the team.

“If (a court judgment) goes sideways, then we have to figure out what is our plan B,” he said.

LeBlanc was asked to comment on a media report that claimed Coyotes majority owner Andrew Barroway has not fulfilled his financial obligations since agreeing last October to assume a 51 per cent-ownership stake in the team.

"We had a very complex arrangement when Andy purchased his 51 per cent share,” LeBlanc said. “Part of that was a vendor note…Andy puts tens and tens of millions of dollars in cash into the team as well as taking on his obligation of the debt.”

LeBlanc also said it wasn’t unusual that, after meeting with Glendale mayor Jerry Weiers on Monday, Barroway himself did not attend the city council meeting on Wednesday.

“The man was here for two days,” LeBlanc said. “He runs a hedge fund in New York.”

Hugh said the Coyotes were also tenants in the city-owned arena under terms of that agreement. Hugh said now that council has cancelled the arena management deal, the Coyotes are without a place to play their home games.

The vice mayor also told TSN that while he still hopes the Coyotes and city are able to reach a new agreement for arena management contract and tenancy, Glendale needs to begin making other plans in case the two sides don't settle their differences.

The city and NHL team seem to be headed for the courtroom, not a negotiating table.

LeBlanc did not say how much the team might be seeking in litigation from the city, although on Wednesday, the Coyotes’ attorney said they would sue the city for $200 million and seek a restraining order to re-instate the arena management contract.

"A restraining order, what are they going to do, keep us out of our building?" Hugh explained. "We own the building. We pay $8 million a year on the debt on the building."

Glendale's special city council meeting Wednesday night was full of political grandstanding and emotional fans, including one who demanded to know whether Weiers pays for his own tickets when he attends games.

"The city of Glendale, we own a double suite," Hugh continued. "We can't even sell those tickets. The majority of people we allow to use those seats are non-profits and Mayor Weiers stops in to games, and says thanks for coming, and leaves. He represents the city of Glendale. They act like he's getting free tickets."

Hugh also defended the timing of the city's vote.

"Think about how horrible it would have been to enact this right before the hockey season," he said. "I think this was the most opportune time."

Hugh added that the Coyotes have already hired event management company Global Spectrum to book events at the Gila River Arena. If the city can't come to an agreement with Global Spectrum to start booking events for the arena this fall, Hugh said city staff would talk to other companies.

"What the city is doing, and I'm sure they're doing it already, is reaching out to Global Spectrum to find an arrangement where they can continue on," he said. "There are other people available who do that also."

In 2013, the city issued a request for proposals for arena management firms and received expressions of interest from Philadelphia-based SMG World, which manages more than 200 facilities; Phoenix Arena Development; R Entertainment and Phoenix Monarch Group.

In a statement released Thursday, the NHL said: "The National Hockey League stands by, and will fully support, the Arizona Coyotes in their efforts to vindicate their contractual rights in response to last night's outrageous and irresponsible action by the City of Glendale.

"We continue to proceed on the basis that the Coyotes will remain in Glendale and will be playing their home games at Gila River Arena."